"Hardwoods" are from angiosperms (or broadleaved trees) and include blackwood, the eucalypts, beech and poplar. They are not necessarily hard timbers, but often are. Special considerations may be required in sawmilling hardwoods.

It is important to accurately saw thickness cuts. Consistent dimensions are critical to successful drying and further processing. This is because:

Hardwoods are well known (especially among softwoodthis is usually within acceptable parameters sawmillers) for their movement off the saw. This movement can result in distorted boards 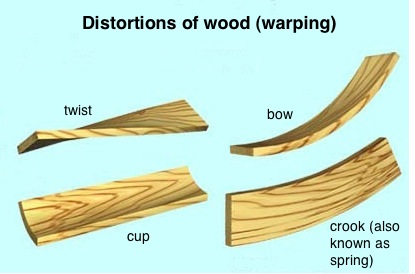 Distortions resulting from both sawing and drying which don't meet grading rules and are difficult to market. Depending on how the board moves off the saw, such deflection is known either as crook or bow. There are sawmilling and drying techniques to minimise warping. Grading rules have only small tolerances for crook and bow.

is a consequence of flatsawing

(otherwise known as spring) is a consequence of quartersawing 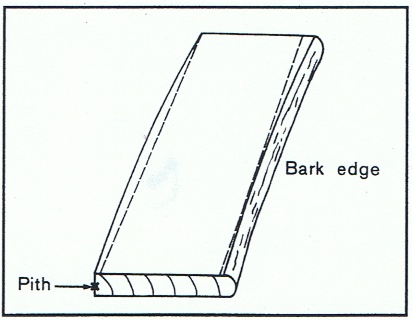 Slab being straightened or boards. With multi-blade or swing-blade portable circular saws the only way of dealing with crooked quartersawn boards is to oversize the width cut, dock the boards into shorts (usually at the knots) and straighten the boards in the moulder with two passes ("blanking" first, then finishing).

results from poor drying procedures. Well stacked timber should not twist. Spiral-grain can cause twist which requires weighting the stack well. 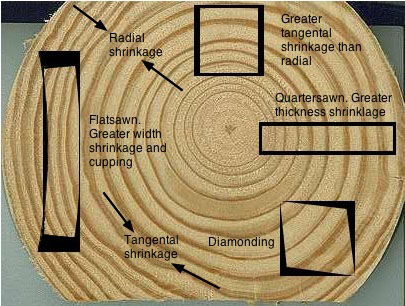 Tangental shrinkage is greater than radial is also higher in hardwoods than softwoods. Hardwood timber is usually cut oversized to compensate for this. Hardwood timber also has a much higher shrinkage tangentally than radially, often double. This can lead to distortion on drying and is also why hardwoods are often quartersawn. Quartersawn boards have low width shrinkage but high thickness shrinkage (which doesn't matter).

Boards should not be sawn including pith

(Note the arrows) in hardwoods. This is because shrinkage and stresses around the pith are in opposing directions and will inevitably lead to low board quality (cupping, splitting and high movement in service).

The wood immediately surrounding the pith is called "juvenile wood" or "heart". This juvenile core is not visually distinct in hardwoods, although shakes and brittlehart are often associated with juvenile corewood. Shakes and brittleheart must not be included in sawn product. Juvenile wood is softer, with lower density, greater shrinkage and thus distortion in drying and is weaker than outer wood. Trees with faster initial growth have a greater proportion of juvenile wood than from trees with slower initial growth. That is, juvenile wood is related to age from pith rather than diameter.

For most hardwoods thinner section material generally behaves better in drying than thicker material. Difficult species such as oak are best dried at final dimensions to avoid internal checking appearing on the surface of the final product. If thicker sections are dried then resawn internal checking then becomes exposed, degrading the board.

Because moisture content can vary in service according to changes in environmental conditions, hardwood timber can move slightly, especially if the timber was not dried properly or contains pith. It is important for hardwood timber to be dried to the appropriate moisture content for the conditions and be free of pith. Quartersawn timber has lower shrinkage across the face of the board and thus less movement in service.

Multi-blade (dimension sawmills) and swing-blade circular sawmills produce timber faster and more cost-effectively than bandsaws. However, it is also important to consider product recovery. It must be kept in mind that a high sawn output at a low cost per sawn m3 doesn't necessarily equate to a better bottom line: Sawing accuracy, crook, core-wood and associated defect, taper, wane, cupping and checking all lower product recovery and are influenced by sawmilling methods.

Bandsaws can produce a higher product recovery with difficult hardwoods that have high levels of movement. This is because their versatility lends itself to practices such as quartersawing with straightening cuts. Bandsaws are also more efficient as log diameter decreases.

The saw kerfcut by the sawteeth as the saw blade moves through the log has a significant impact on conversion efficiency. Bandsaws, with their thin kerf, produce much lower volumes of sawdust waste than circular saws. A band saw with a thin kerf could increase lumber recovery by around 10% over portable circular saws (over 20% of the wood can be lost as sawdust with circular saws).

These are tradeoffs and careful consideration should be taken in selection of sawmill for hardwoods.

can generally be remedied by weighting the stack. Flatsawing is considered easier and lower cost than quartersawing as less cuts are applied. However, depending on the species, flatsawing can produce higher levels of degrade in seasoned hardwood timber. Furthermore, flatsawing generally produces wide boards which is not usually desirable for hardwoods, because of cupping, checking and higher levels of movement in service. Wide flatsawn boards can also be prone to splitting on drying. Such defect restricts end-use options.

can be an issue with quartersawn

Greater thickness shrinkage boards. Hardwood logs will release stress into boards as crook when quartersawn directly off the log (such as with swing-blade or multi-blade portable sawmills). Resulting crook can be more than what grade tolerances allow. However, larger logs release less stress, resulting in lower levels of crook. This is why sawmillers with multi-blade and swing-blade portable sawmills prefer larger hardwood logs. Sawmills able to rotate the log on a bench can re-straighten a sawn face that has curved as a result of stress release.

Excessive crook is a serious defect and will significantly devalue quartersawn timber. Crook should be dealt with in the sawing process, for example by straight sawing of edges after faces have been cut. If this is not possible (such as when "quartersawing" with multi-blade or swing-blade saws) crook can be removed by blanking shorts when dressing the timber. Properly practiced quartersawing always uses straightening cuts to produce quartersawn boards free of crook. However, because many more cuts are applied, this process is more expensive than flatsawing. This additional cost may be justified if there is less degrade in the seasoned product.

The finished surface of quartersawn boards has a different appearance than flatsawn boards. For this reason the buyer may specify the type of board required. 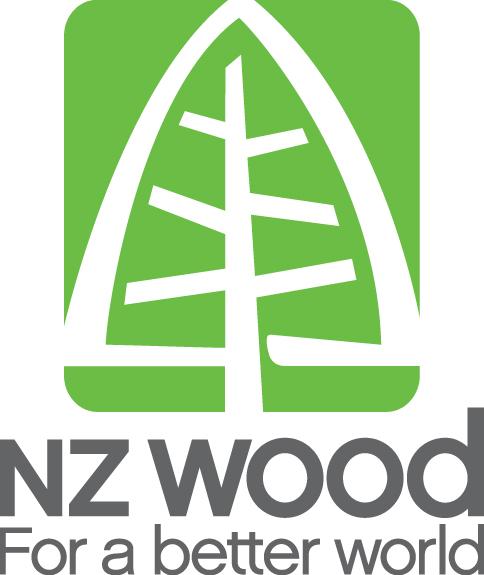 Disclaimer: While every effort is made to ensure the accuracy of the information provided on this site, Farm Forestry Timbers Society do not accept liability for any consequences arising from reliance on the information published. If readers have any doubts about acting on any articles they should seek confirming, professional advice.