You are here: Home» Membership» Farm Forestry Newsletters» Newsletter 132, May 2021

For more information on these events, they are posted on the NZFFA website »
Branch secretaries, please make sure you notify head office of any branch or action group events.

‘Woodside’ is the 121ha property of John and Rosalie Wardle, located in the Mt Oxford foothills some 10km west of Oxford.  84ha (74%) is clothed in regrowth black beech forest, whilst 28ha (23%) has been planted in exotic forest (mainly radiata) since the Wardle purchase in 1973.  The remainder is in pasture and residential management.

Many readers will have visited the ‘Woodside’, and be familiar with the sustainable management and harvesting being practiced in the beech forests.  Thanks to Johnny’s expertise and experience, the beech forests were the first in the nation to be granted a Sustainable Harvesting Permit under the 1993 Amendment to the Forests Act.  Fewer readers are aware that the Wardles have also practiced sustainable ‘continuous cover’ harvesting within their radiata forests, since they first became mature in the early 2000s.  In other words, they do not clearfell – trees are harvested singly or in small groups at relatively short intervals, whilst retaining a canopy cover of smaller living trees.  No-one else in the country does that economically.   So when an opportunity arose to see the harvesting actually being done, it was eagerly grasped - with 20 of us gathering at Woodside on April 14. 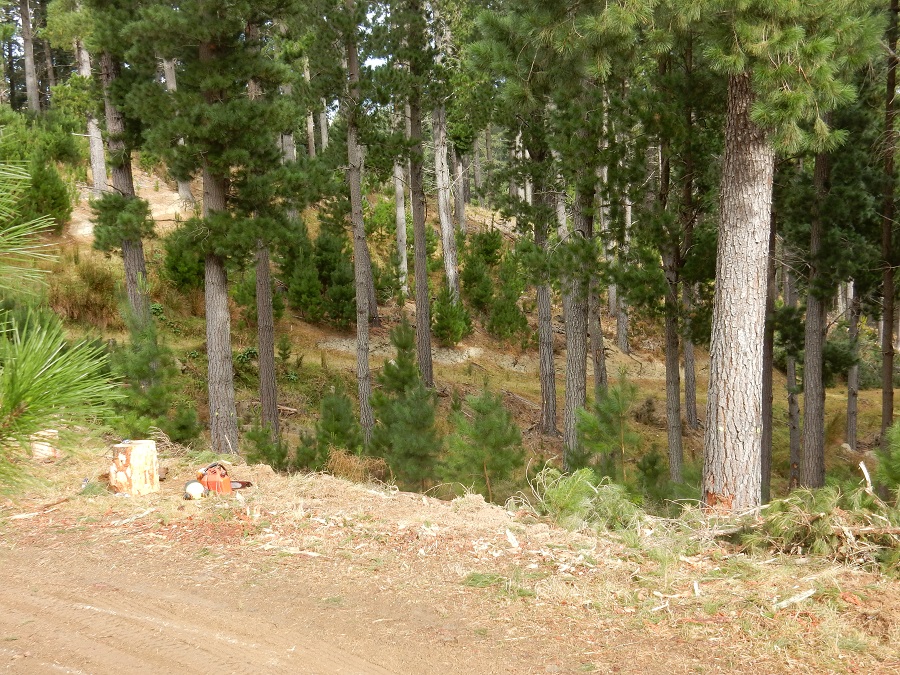 Continuous cover forestry at the Wardle property in central Canterbury.  The current harvest felled just three trees from within this stand.

The single trees which Johnny harvests must have reached a target diameter of 60cm.  All have been pruned to at least 6m, and have small branches and crowns due to their being grown relatively close to neighbours.  Hence, despite Woodside being in a very windy environment, the small ‘sail’ area of the crowns means that wind-throw has not been a major problem.  The 5.7ha forest where we saw the target trees being removed during our visit had been planted in the 1970s, and looked impressive.  Hence, it was hard to believe we were observing the 10th visit to extract single trees – this time about 40 tonnes/ha or 10% of the total standing volume.

One secret to Johnny’s success is having a good track network.  This allows nearly all trees to be felled within easy reach of tracks, and that trucks can get close to the felling site.  But the main reason for his economic viability is that harvesting is undertaken by a simple, but specialised, logging crew.  When we were there, this was being carried out by Curle Logging, which consisted of just two machines and two men – Brad Watson and Richard Pierson.  The ‘hardware’ consisted of a 20 tonne digger with a grapple head and a skidder with a winch, plus a stationary delimber for removing remnant branches alongside the skid site.  As we watched, Brad operated the digger to pull whole 30m long stems through the delimber, while 100m away Richard chainsaw felled trees marked by Johnny.  Needless to say, this has to be done skillfully in order to minimise damage to the smaller live trees and to make sure one end of the stem is close to a track.  Once both men have cut up and stacked the logs at the skid site, they return to carefully recover the felled stems.  As usual after any harvest, the post-extraction area can look a bit messy due to the scattered slash and disturbed ground, but any damage to the remnant trees is minimal, and experienced foresters know that on such a site recovery is rapid and all will look ‘normal’ a year later – especially where 90% of the living trees (mostly natural regeneration) remain undisturbed.

Brad told us that he had never worked in a large clear-fell operation, and that he really enjoyed this smaller, more intimate form of logging.  On an average day the crew would harvest around 70 tonnes of logs – roughly one truck load per man.

While we were there, a logging truck arrived and was loaded with 25 tonnes of logs.  These were off to the export wharf as S30 sawlogs.  The truck was to return later in the day for a load of larger pruned P1 ‘peeler’ logs, which would be transported to the Westco-Lagan mill on the West Coast, where they fetch top prices. 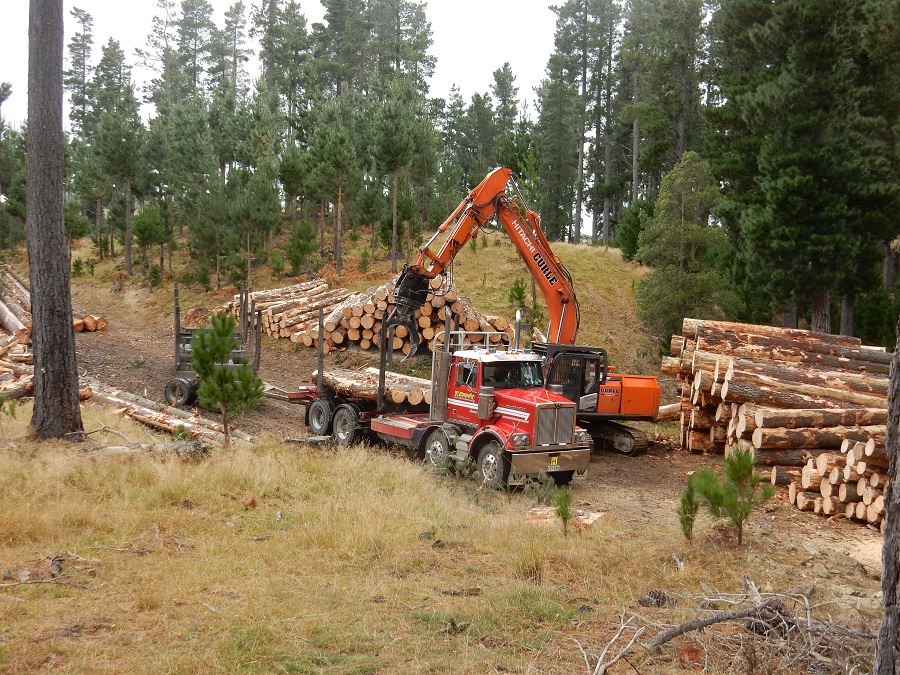 Continuous cover forestry at the Wardle property in central Canterbury. These radiata logs were all felled from amongst standing forest within 150m of the truck

Johnny told us that managing his radiata forest on a continuous cover, single-tree selection regime returns him around $1400/ha/year, whilst the same management in his beech forests returns around half that amount.  In addition to this long-term sustainable return, the Wardles also host bee hives and make income from honey.  Their property management plan has a big emphasis on conservation values, actively promoting improved habitat for indigenous birds, reptiles and invertebrates – aided by the appropriate weed and pest control.  In 2008, Woodside was granted an Open Space Covenant by the QE11 National Trust.  This guarantees long-term consistency of management of the whole property, including the exotic plantations.

In conclusion, there is little doubt that in the long-term, the powers-that-be will place limits on the clearfell harvesting of plantation forests – due to the risks associated with environmental damage (eg., soil and biodiversity losses) and the very obvious visual impacts, all of which attract negative attention from the public.  The obvious alternative is continuous cover forestry, but the forest ‘industry’ have long told us that this is not economic for them.  So we must congratulate the Wardles for pioneering the way towards demonstrating that this does not have to be the case.

Thanks to Johnny and Rosalie for hosting a most interesting day.

Me, thee and the PCE

Simon Upton was surprised by my remarks on his address to the March NZFFA conference. He invited me to talk to him, not to congratulate me on my brilliant analysis but to express concern that I might have misunderstood his approach. But it wasn’t really a discipline interview. I understood his approach, and it’s not his fault that I have trouble with some of the implications.

First, He Waka Eke Noa is working on “recommendations for an appropriate farm level emissions pricing system from 2025” as an alternative to the Emissions Trading Scheme. In short it is designing a stand-alone programme for farmers outside the ETS. Simon might be familiar with the details but since nothing has been released yet, his suggestion of a methane levy was new to me.

It raised the question of equivalence between a methane levy and a carbon price. The methane levy is likely to be set high enough to change farmer behaviour but not so high as to drive farmers off the land. How high that will be, and where it will sit vis a vis carbon under the Emissions Trading Scheme?

Second, a methane levy is another example of an ad hoc climate change policy, of which there is a growing number (e.g. no more coal-fired boilers). While these are understandable, every ad hoc policy makes investment in production forestry more uncertain.

Although there is general agreement that we need more forests, no-one is addressing the growing body of regulatory risk that puts new planting in doubt. Why expand when there are rising land prices, regulatory uncertainties and potential controls on how much carbon one might claim, after perhaps buying land at full value on the assumption of one credit per tonne sequestered? The commercial forest industry might easily turn its back on the Climate Change Commission and the Government’s expectations for the sector. It’s not obliged to help.

Third, if He Waka Eke Noa is successful then of course trees on farms will be useful for offsetting methane levies. Assuming it measures the changes in carbon storage from one year to the next (‘delta carbon’), farmers will be able to claim credits on land that was in forest in 1990, even though this is excluded from the ETS. And if those credits are tradable (why not?) prices for this land will jump, and there may be a sudden rush to become farmers.

Finally, there are 11 agricultural organisations and two Ministries committed to He Waka Eke Noa and 2,400 participants and two Ministries committed to the ETS. I have a mental picture of these two elephants lumbering across the veldt trying to escape a grass fire, while above them circle the Climate Change Commission and the Parliamentary Commissioner for the Environment giving two caws for right and one caw for left. If only I could draw.

Harvesting small forest blocks located in areas with difficult access can be difficult for all concerned and the physical and economic constraints sometimes result in growers receiving marginal or no return for their investment in growing their forest. Finding a suitable, cost-effective harvesting system in these situations can be both challenging and confusing for forest owners and harvesting contractors alike.

Small, low-cost trucks used for log transport provide a viable alternative to commonly used systems that struggle to achieve acceptable production and cost levels in small forest harvesting. Reconfigured MAN fertiliser spreaders are one brand of farm truck that provide options for transporting logs from a processing site, in or adjacent to a forest stand, to a load-out point near a road constructed to a logging truck standard. Using a truck forwarding system avoids the need for construction of a fully engineered road to the forest. More

For FFA members with an interest in speciality species feast your eyes and click the following new and existing technical reports of interest: