Armillaria root disease is widespread throughout New Zealand in pine forests and kiwifruit orchards, and in trees in parks, home gardens, and riparian zones (FHNews 85:3-4; 88:2; 115:1). In plantations of radiata pine, losses have traditionally been associated with first-rotation stands planted on sites cleared of native forest. The disease is caused by two species of indigenous wood decay fungi, Armillaria novae-zelandiae and A. limonea, both of which occur naturally within native forest ecosystems. 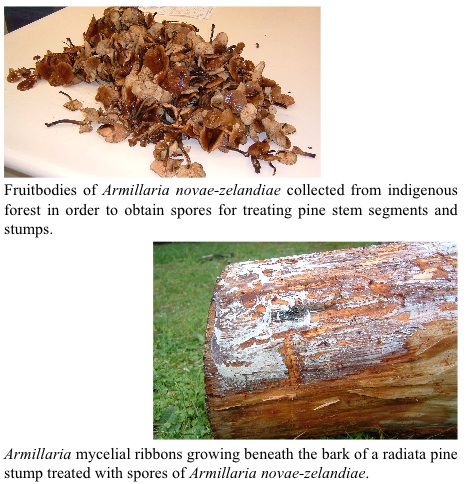 After tree felling, the fungi colonise the stumps of the native trees, and infection spreads into the new plantations through root contact between the stump roots and those of the young growing pine trees. While little native forest is now converted to plantation, the legacy of this once-common practice is still with us. It has been estimated that national losses in the year 2000 due to the impact of Armillaria root disease amounted to $37 million, as a result of early stand mortality and subsequent unrealised growth increment on infected living trees. Although the influence of this early period of native forest conversion is declining, the national cost of the disease has nevertheless been forecast at $20 million for the year 2020. This is because although Armillaria-caused mortality and increment loss are now comparatively low, there are indications that infection may be spreading into new areas of pine plantation by means of spore dispersal. Firstly, the disease occurs in pine stands on sites where there has been no history of indigenous forest. Then, numerous studies have established that New Zealand Armillaria populations are composed of densely distributed colonies, implying that spore dispersal is prevalent. This is in stark contrast to the distribution pattern of Armillaria species in many regions overseas, where colony densities are often much lower, indicating that their establishment by spores is less frequent. It may also be significant that, in general, only A. novae-zelandiae has been found in pine stands on non-native forest sites, suggesting that this species may disperse to a greater extent than A. limonea.

It is therefore important to clarify the role of spore dispersal by direct means. A number of studies have already confirmed that partially buried, freshly cut, pine stem segments are readily colonised after treatment with spores of A. novae-zelandiae. 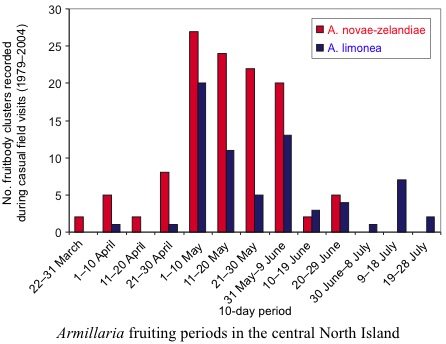 Armillaria can often be found beneath the bark in piles of partly buried slash and log debris, and it is conceivable that contact between this material and extending roots of young pine trees may lead to the formation of new infection centres. It was recently shown for the first time that freshly cut radiata pine stumps are also susceptible to spore colonisation, although it is has been found that thinning stumps are commonly invaded vegetatively from Armillaria inoculum already present on the site. New work is aimed at resolving the threshold spore density required for colonisation to occur, and relating this to seasonal and spatial patterns of spore dispersal present in the atmosphere.

Although fruiting is rarely seen in pine forests, large fruitbody clusters releasing copious quantities of spores are produced in native forests throughout the country during late autumn-early winter (see graph). This work forms part of a larger Forest Health Armillaria research programme directed towards developing a protocol for the identification of more severely infested stands, and a disease management remedial procedure that can be applied to such sites.