Armillaria - the cause of resin soaking degrade in Pinus radiata? 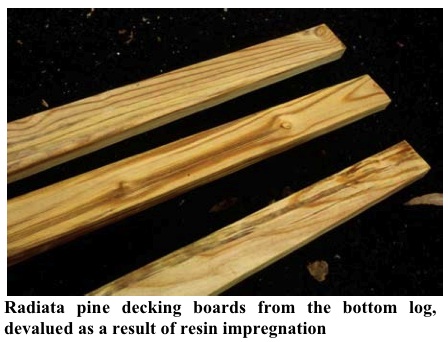 Potentially high value pruned butt logs from certain forests on clay soils in warmer parts of the North Island are currently being down-graded in value as a result of extensive internal resin impregnation which becomes evident during milling. Resin soaked wood from affected logs is not amenable to gluing, staining, or mechanical sanding, and is not visually appealing. The soaked zone is often associated with sunken furrows present at the base of the tree, and extends up to 4 m above ground level within the stem. Suggested causes have included damage or stress from production thinning, pruning, wind exposure or cattle, but not all appear applicable in all situations, and the reason for the problem has remained obscure.

Many trees in affected stands are also chronically infected at the root collar by the root disease fungus, Armillaria. One normally thinks of Armillaria as a forest health problem, not an agent of timber degrade. Nevertheless, infected trees produce resin as they attempt to fight off the pathogen, and there were a number of reasons to think that Armillaria might be involved in the resin problem. The impregnated area extends up the stem from or near the root collar zone where Armillaria infects the host tree. Armillaria was found to be active in sunken depressions at the base of trees in forests where the problem was known to occur. White mycelial fans of this fungus were also observed beneath the bark associated with basal fluting and resin soaking on a log stacked in a sawmill yard where resinous degrade had been an issue.

To resolve this question, a small study was undertaken by Forest Health at three sites recently clear-felled in a forest where basal resin soaking was causing concern. Local forest staff uprooted and hosed down 34 full-sized
Pinus radiata stumps. A fresh disc was then cut from each stump surface to expose the star-shaped resin soaked pattern, and one stump was also sectioned longitudinally. A record was made of the extent of impregnation present on each cut surface, and all stumps were examined for signs of Armillaria around the partially cleaned root collar region.

Resin impregnation was found in all stumps, many of which were soaked more than 50% across the cut surface area. However, signs of chronic Armillaria infection were present in only one stump, which was extensively colonised by the pathogen. This low frequency was consistent with the expected disease incidence in this first-rotation forest planted on former farmland partly reverted to scrub. In first crop plantations the incidence of Armillaria is invariably greater in stands converted directly from indigenous forest. So, despite a low prevalence of Armillaria, the extent of resin impregnation was still substantial. 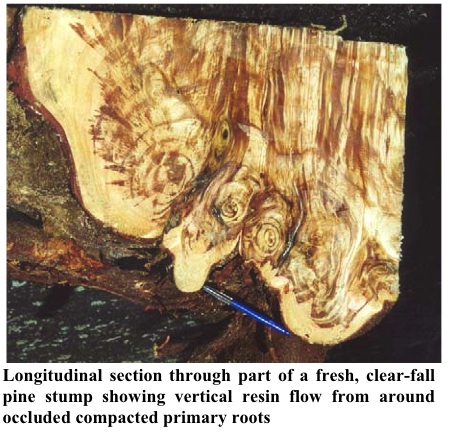 The impregnation pattern in the stump sections suggested that the basal resin production may originate from two sources. In transverse section, radial sectors of resin impregnated wood converged inwards from localised zones of dead cambium near the base of the tree, although the cause of death was unclear. In longitudinal section, resin soaked bands were also seen to run vertically upwards from points beneath the stump where deformed primary roots and associated soil were occluded by wood as a result of secondary thickening in the growing tree.

The cause of the stress that leads to resin impregnation in pruned butt logs was not identified, nor is it known why it is more commonly found on clay soils. However, this study effectively rules out Armillaria as the main reason for the problem. Armillaria is a pathogen that causes growth increment loss in more heavily infested stands of radiata pine in New Zealand. It may even make a minor contribution to resin soaking degrade in some forests. However, another factor has yet to be identified as the principal cause of severe resin impregnation in potential quality logs grown on heavy clay soils.