The root rot pathogen Armillaria novaezealandiae is not commonly encountered on the Canterbury plains. However Hagley Park, located in the heart of Christchurch, does appear to be under somewhat of an attack. Since a systematic search for the fungus was begun in 1991 around sixty different species of tree have been found with infection. Although some of the infected trees exhibit the obvious and sudden decline often associated with the disease in exotic plantations, most undergo a gradual decline with sections of the crown progressively becoming unthrifty and dying. The protracted nature of the decline is illustrated in an area called the Pine Mound where photographs taken in the 1940s show over forty healthy Pinus pinaster . Today only fifteen remain, with the most recent death in 1997. When this eighty year old tree was removed it was found to be heavily infected by Armillaria with rhizomorphs extending several meters beyond the stump. 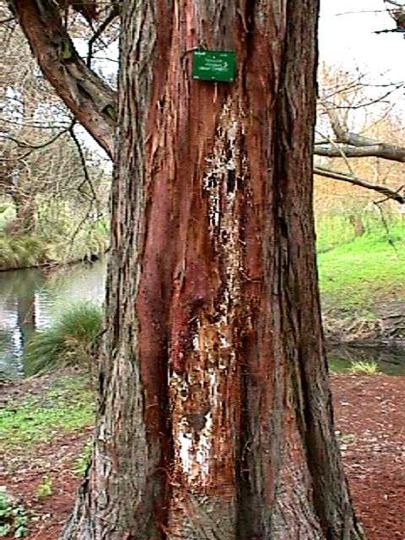 The above photo shows a live Taxodium distichum with extensive Armillaria mycelium to a height of 1.8 meters. Although Armillaria novae-zealandiae has distinctive mushrooms producing copious spores the role of spores in the infection cycle is not clearly understood. Spread and infection appears to be largely via host tree roots coming into contact with infected woody material or rhizomorphs. In Hagley Park rhizomorphs have been found to a depth of 1.6 meters and numerous examples of chronic tree infection can be found throughout the gardens. Mycelial sheets have been found extending under the bark of some of these trees to a height of over five metres.

Cultural practices that go hand in hand with an intensively managed botanical gardens have ensured that conditions for the development of armillaria root rot have been favourable since the initial plantings in 1863. Tree removals often turn up old stumps and woody debris which have associated Armillaria mycelium. In the past the practice of chipping and mulching of infected material and leaving stumps to rot provided an ideal environment for the fungus to spread. Despite some media reports there is as yet no wonder cure or prophylactic treatment for armillaria root rot although the disease can be managed (FHNews 85: 3-4, May 1999). Recognising this, the Christchurch City Council has developed a draft management strategy for the control of armillaria root rot. The plan is a common sense document based around integrated programmes of work and includes: