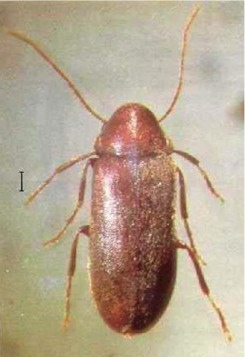 Type of injury
The larvae of the pine bark anobiid feed in bark and adjacent sapwood. When core timbers contain infested bark inclusions, adults emerge through overlying plywoods and veneers, marring finishes. Adults emerging from bark strips or bark-encased knots in house framing may perforate wood, hardboard, and plasterboard linings. The flight holes, which are variable in size but usually about 2 mm in diameter, are often mistaken for those of the household borer, Anobium punctatum.

Distribution
This European insect is found world-wide and has become established throughout New Zealand.

Economic importance
In the 1950s, when untreated lower grades of radiata pine timber with bark inclusions and strips of attached bark were commonly used for the manufacture of plywood-faced doors and other joinery, for concealed framing of furniture, and for coreboards, the appearance of "borer holes" in the fittings of recently completed buildings involved builders and suppliers in the cost of repairing or replacing damaged articles. Since then, changes in manufacturing and building practices, and increased use of non-susceptible materials (e.g. particle boards) have practically eliminated this cause of damage, so it is now doubtful if the pine bark anobiid is of any economic importance in the building and timber industries.

At timber yards and sawmills which hold stocks of seasoning radiata pine or other susceptible timbers, minor infestations may be found in bark strips and bark-encased knots of lower grade timbers, and occasionally in timbers used for racks and pallets. Such infestations scarcely reduce the utility of the timber and die out when the small amounts of bark have been eaten away, and so preventive or remedial measures are not warranted if the timber is intended for local use. On the other hand, sawn timber intended for export is required to be free of bark and all living insects, so bark inclusions and bark strips must be scrupulously excluded from this class of material.

Description, life history, and habits
Adults are light (sometimes reddish) brown beetles with a smooth, rather soft body covered with a down of short fine hairs (Fig. 1). The beetles are 3-6 mm long, 1-2 mm wide at the rear margin of the thorax, and a little wider across the rear third of the elytra (wing cases). The head is concealed beneath the thorax and directed downwards. The three terminal segments of the antennae are elongate, especially so in males where together they are longer than the other eight segments. The thorax is somewhat saddle- shaped, rounded in front and widened into lateral flanges towards the rear where it is as wide as the elytra. The elytra are smooth, without longitudinal rows of pits (cf. Anobium punctatum), and rounded at the end. The last segment of the abdomen projects beyond the elytra.

The mature larva is a white C-shaped grub about 8 mm long, with well-developed legs, a light-brown head, and black jaws (Fig. 2). It is very similar to those of A. punctatum and another anobiid borer, Xyletinus undulatus. The newly-hatched larva is less than 1 mm long, and the body is not C-shaped but nearly straight. Intermediate-stage larvae are essentially like mature larvae, but smaller. The egg is lemon-shaped, about 0.5 mm long, and 0.3 mm wide. 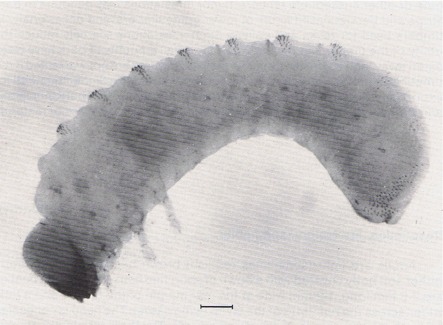 The duration of the life history is normally 1 year, but some larvae undergo a period of suspended animation and complete their development in the following year. The number of times the developing larva moults has not been determined, partly because there is great individual variation in the size of larvae of the same age.

Pupae are found from early September onwards. Emergence of adults begins in October and continues until late February or early March. Most appear in December and January. Copulation usually occurs within a few hours of emergence, and eggs are laid 1-6 days later. Adults do not feed, and die after a few weeks.

Eggs are usually laid during the night either singly or in small groups under bark scales, on roughened or wrinkled bark at the bases of small branches, in crevices, or on rough-sawn wood near bark; they hatch in about two weeks. Eggs are not laid on sawn timber until it has dried to a moisture content of about 25% of its oven-dried weight, but drier material, including stored kiln-dried timber, may be used. On hatching, the larva consumes part of the egg shell and then wanders over the surface until it finds soft tissues, usually bark or pith, into which it can bore. Once entry is gained, the larva adopts a curved posture and proceeds to feed and grow. The period between hatching and the first moult lasts for about a month.

Larval tunnels are irregular in cross-section, but are generally much wider than their depth. Workings (Fig. 3) are rather firmly packed with frass composed of scrapings and bun-shaped faecal pellets. These pellets are light in colour where larvae have been feeding on wood, and dark where bark has been the main source of food. Pupal chambers may be made in bark or sapwood, or amongst larval frass between the two. The pupal cell has a smooth lining of dark-brown material which is secreted and moulded to the walls by the larva just before pupation. This lining is most obvious where pupal chambers occur amongst larval frass. Pupal chambers of the native anobiid, Hadrobregmus magnus, are similarly lined, but those of A. punctatum are not. 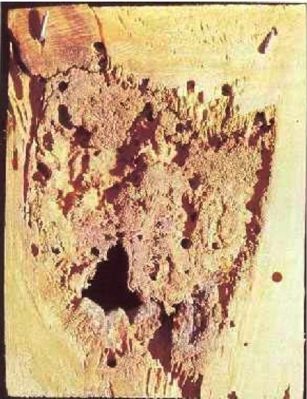 Fig. 3 - Larval workings of the pine bark anobiid in a bark inclusion in radiata pine timber.
Holes in the wood were made by emerging beetles.

The pine bark anobiid occurs in exotic conifer forests as well as at sawmills and timber yards. In radiata pine forests, terminal shoots killed by the fungus Diplodia pinea often serve as host material, and infestations are common in the upper parts of felled trees, especially at whorls of small branches. After forest fires, the pine bark anobiid may become extremely numerous in dead standing trees and other wastes. Larvae may even develop in the central pith and in the scales of cones.

Control
Damage to wall linings and finished surfaces of joinery is readily prevented by removing bark strips and eliminating other bark inclusions from framing and core timbers.

Chemical control has not been required. Should the need arise, it has been found that newly-hatched larvae are particularly susceptible to con- tact insecticides when they wander over the surface of host material.

Two hymenopterous parasites have been recorded in New Zealand: one, Seleroderma sp. (Eulophidae), is probably of overseas origin; the second, Doryctes sp. (Braconidae), has been reared only from a forest population of the pine bark anobiid near Rotorua. However, biological means are not generally appropriate for the control of borers in timbers in use.