Forest Pathology in New Zealand No. 7. 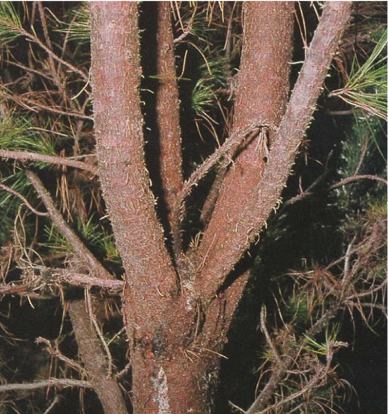 Fig. 1 – Infection by Sphaeropsis sapinea has led to the death of the terminal shoot, resulting in malformation and the development of multiple leaders. Note the mummified but persistent terminal shoot in the centre.

Type of injury
Death of terminal shoots leads to malformation (Fig. 1) and, in rare cases, to the death of individual or small groups of trees. 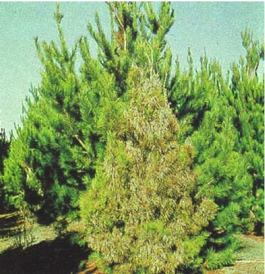 Fig. 2 - Extensive dieback of terminal and lateral branches in Pinus radiata as a result of severe Sphaeropsis sapinea infection.

Fig. 3 - Woody stem infected by Sphaeropsis sapinea . The bark has been sliced off to show the fruiting bodies on the dead areas.

Distribution
The fungus is found throughout New Zealand.

Disease development
The fungus fruits prolifically on slash and cones, and large numbers of asexual spores are produced throughout the year. These are thought to be dispersed by rain splash. No sexual (perfect) stage of Sphaeropsis sapinea is known.

Leader dieback: Infection of the current season’s growth results in the dieback of terminal and lateral shoots. The first sign of infection is the appearance of a small, light-brown spot on the stem which soon develops into a purple or dark-brown lesion. The lesion progresses along and around the stem but does not extend beyond the junction of the current and the previous season’s growth. The shoot usually droops at the point of infection and the part above the lesion dies. Small, black fruiting bodies of the asexual stage of the fungus appear on the dead shoot, which quickly dries out and becomes mummified. Needles on the infected shoot first turn reddish brown and then grey, and persist for a long time. Warm temperatures (20°-25°C) and humid conditions favour the development of infection in green shoots.

Crown wilt and whorl canker: Infection of the woody stem (more than 1 year old, with a corky bark) can lead to the death of a considerable portion of the crown or even of the whole tree, depending on the point of infection. Infection usually, though not necessarily, occurs through wounds. Pruning wounds are a common source of entry for the disease: with this type of injury, which is known as “whorl canker”, depressions form above and below the infected, pruned branch stub because the cambium has been killed. Severe whorl canker may lead to crown wilt.

Infection of the woody stem by Sphaeropsis sapinea is first indicated by discoloration and death of the inner bark. The affected area is initially a translucent, light-brown colour with a darker irregular margin, but becomes darker as the tissues dry out, and finally turns almost black. Fruiting bodies form under the bark on the dead areas. From the inner bark the fungus invades the ray cells in the wood and finally reaches the pith, where it moves rapidly up the stem to invade further ray cells: downward movement is generally limited. Infected wood ranges in colour from a light grey to a dark blue-grey - a condition known as “blue stain”. The stain may be uniform but is more frequently in wedge-shaped sectors. Wilting of shoots, from a single branch to the whole crown depending on the extent of infection, follows invasion of the wood by
the fungus. The needles first turn chlorotic and then reddish brown.

Conditions which favour infection of the woody stem are not precisely known, although stress, imposed by factors such as drought, is thought to be a contributing cause. Preliminary research indicates that pruning wound infection is much more common if the operation is carried out in summer rather than winter. Pruning wounds also appear more susceptible to infection when more than 50% of the green crown is removed during pruning than when only up to 25% of the green crown is removed.

Economic importance
Leader dieback is a serious problem in a few localised areas only, principally those in closed valley systems. While tree death rarely occurs, severe malformation can result from repeated attacks. In one very badly affected area a 63% reduction in potential volume has been reported.

Crown wilt (Fig. 5) is also uncommon, although in one small woodlot studied 50% mortality occurred after a severe drought.

Mortality caused by whorl canker is usually very low, but losses up to 20% have been reported.

Control
Chemical control is usually not necessary. In a severely infected area, three applications to the tree crown of copper oxychoride (0.4%), given at fortnightly intervals starting in November, resulted in a 50% reduction in disease occurrence. In areas where damage by Sphaeropsis sapinea is common the incidence of whorl canker may be reduced by pruning in winter and avoiding the removal of more than 40% of the green crown.