Forest and Timber Insects in New Zealand No. 53: Blue-gum psyllid. 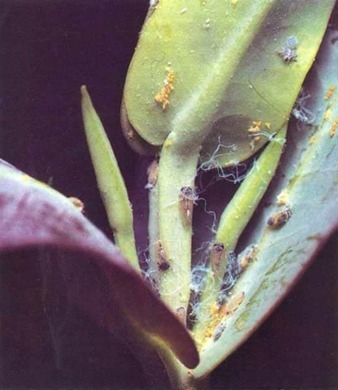 Fig. 1 - Blue-gum psyllid adults and juveniles on Eucalyptus nitens. Note the waxy filaments produced by the insects. The yellow objects are eggs.

Type of injury
Blue-gum psyllids (Fig. 1) congregate on buds and on developing shoots of certain eucalypts and, by sucking sap, cause distortion, wilting, and sometimes death of young leaves. Twigs and branches are not killed but young plants may be stunted following loss of leaves.

The insects excrete excess sap sugars as fine droplets of a sweet sticky solution called honeydew, and soot fungi which develop on it give heavily infested plants a blackish appearance. All nymphal stages exude filaments of a white waxy secretion. A loose cottony mass of broken scattered filaments indicates the presence of blue-gum psyllids.

Hosts
The insect is found on quite a range of Eucalyptus spp. But shows a preference for those in the blue gum group, e.g. E. globulus and E. nitens.

Distribution
This insect, accidentally introduced from Australia, is established throughout New Zealand. It was first recorded here in 1889.

Economic importance
At present, E. globulus is of no economic importance in New Zealand, mainly because of its susceptibility to attack by the eucalyptus tortoise beetle (see Leaflet No. 10) and the gum-tree scale (see Leaflet No. 22). Compared to the damage to the tree from these sources, the damage caused by the blue-gum psyllid is of minor significance. The same is true for Eucalyptus nitens.

Description, life history, and habits
The adults (Fig. 2) are 1.5 to 2 mm long, with two pairs of membranous, greyish-white wings which are held roof-like over the body when the insect is at rest. General body colour is dark purple, but transverse yellow bands on the upper and lower surfaces of the abdomen and on the under side of the head and thorax can be seen if a hand lens is used. The head bears a pair of yellowish black-tipped antennae, rather prominent, dark-brown, compound eyes, and two simple eyes. The mouthparts form a fine sucking tube. The legs are dark yellow. Pointing backward from the abdomen of the female is a spike-like projection which encloses the ovipositor (egg-laying apparatus). 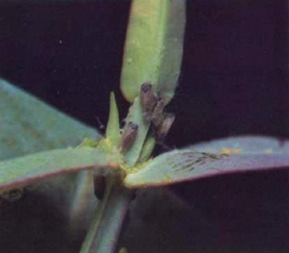 The young or nymphs (Fig. 3) are pale yellow with patches of dark purple. The nymph moults four times to reach the final stage, by which time wing buds are so well developed that the insect appears almost as broad as it is long. The legs are thick and chunky. Scattered, rather stiff hairs are present on the abdomen, which is rounded at the rear. The final nymphal stage can move about almost until the time its skin splits down the back and the adult emerges. 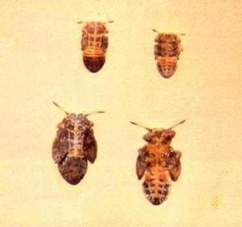 It is not known how many eggs can be laid by one female, but females of other psyllid species lay over 100 eggs each. The yellowish eggs of the blue-gum psyllid are usually laid in groups near developing buds and stick to the plant; several females may contribute to one egg mass. In summer, eggs hatch in about a week, but hatching is delayed during cold spells, and eggs can remain dormant through the winter.

Usually in a population of blue-gum psyllids all stages from eggs to adults may be found throughout the year.

Control
Amongst colonies of the blue-gum psyllid there are usually the light brown remains of individuals which have been killed by a minute parasitic wasp Psyllaephagus pilosus Noyes (Clark 1938, Withers 2001). Other controlling agents are predatory ladybird beetles and lacewings. Recently a ladybird, Cleobora mellyi Mulsant from Tasmania, which eats eggs of the eucalyptus tortoise beetle Paropsis charybdis, has been released in New Zealand and is now established in at least some areas. This ladybird and its larvae also eat psyllids, so it may also prey on the blue-gum psyllid.

Since damage by this insect appears to be of little importance no attempt has been made to control it with insecticides.