Forest and Timber Insects in New Zealand No. 22. Gum-tree scale. 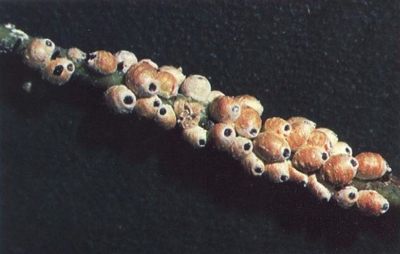 .
Fig. 1 - Sacs of adult females of the gum-tree scale on a twig of Eucalyptus globulus. The sacs are 2-4 mm long.

Type of injury
This scale insect sucks the sap of eucalypts and may cause dieback of branches; occasionally a severe attack can kill the tree. Photosynthesis may be affected when leaves are covered with sooty mould growing on the honeydew excreted by the insects.

Hosts
Only eucalypts are attacked, and trees of the blue-gum group are the most susceptible. In New Zealand the scale is found on Eucalyptus amygdalina, E. eugenioides, E. globulus, E. gunnii, E. macarthurii, E. nitens, E. obliqua, E. regnans, E. viminalis, and a few others including ornamentals such as E. cinerea.

Distribution
This Australian insect is well-established throughout New Zealand.

Economic importance
The gum-tree scale is not of great economic importance, since it is usually well-controlled by introduced predatory insects. The most susceptible Eucalyptus species are of little importance in forestry, but are used in shelterbelts. The effect on trees is usually overshadowed by that of the leaf-eating insect Paropsis charybdis (eucalyptus tortoise beetle).

Description, life history, and habits
Each adult female is enclosed in a rounded felted sac, 2-4 mm long and varying in colour from yellowish to dark brown. Each sac is attached by its underside to the host and has an opening at the top which is blocked by the rear of the insect's abdomen. The sacs (Fig. 1) are often packed so close together that stems and twigs may be entirely covered for several centimetres; individual sacs may occur on the veins of leaves. The adult female is brown and usually about 1.7 mm long, but some can reach 3.5 mm in length. Like all female scale insects, it is wingless. The legs, antennae, and fine stylet mouth-parts are difficult to see even with a hand lens. If the insect is squashed, a purplish liquid oozes out. Several hundred eggs are laid by a single female inside the sac; the bigger the female the greater the number of eggs. After hatching from the eggs, the red nymphs or "crawlers" emerge through the opening at the top of the sac, move over the surface of the tree, and are often scattered by wind for long distances. A crawler remaining on the tree or reaching another suitable host, settles down on the leaves or small twigs, inserts its stylet, and starts sucking sap. The crawler also secretes wax threads to form the sac under which it lives. The sex of these first-stage nymphs cannot be recognised. After moulting each crawler moves out from its sac and settles elsewhere on the host.

The sacs of the second-stage males are elongate, white, and papery and are often made under loose bark or in crevices. Except for a slit at the rear, each sac encloses the whole body. The males pupate under the sacs and emerge as winged adults. These are 1.4 mm in length, have relatively long legs and antennae, and a pair of rather large, broad, transparent wings. Two white waxy filaments projecting backwards from the abdomen are formed while the male is in the sac, but usually break off during emergence. The males have no mouth-parts and live for only 2-3 days. Their sole function is the fertilisation of the adult females and one male may mate with several females.

The second-stage female crawler grows under its waxy secretion and doubles its size in about 12-15 days. It moults, emerges from its protective covering, moves along the twigs to a new position, and inserts its mouth-parts. It usually stays in this spot, but if the place is unsuitable for feeding it withdraws its stylet and tries elsewhere. A few days after the insect settles down, the felted sac gradually appears and is usually completed within a fortnight. In this time the female grows to full size and is fertilised. Females mate only once. Eggs are laid in the sac four weeks after the final moult. Unfertilised females do not produce progeny.

In New Zealand the number of generations which the gum-tree scale has in one year is unknown, but in South Australia there are at least four generations a year and all stages can be found at any time. In warm weather the life cycle can be completed in about 50 days; in cold weather it may take up to three months (Patel 1971).

The insects suck up more sap than they can use. Excess sugars are discharged as very fine droplets of a sweet sticky substance, called honeydew. This fails onto lower parts of the host tree and soon becomes covered by a sooty mould which gives severely attacked plants a blackish appearance. The sooty mould decreases the amount of light reaching lower leaves and presumably reduces their contribution to the total photosynthetic activity of the tree.

Control
Adults and larvae of the ladybird beetle Rhyzobius ventralis (Erichson) (Figs. 2 and 3) feed on all stages of the gum-tree scale and usually keep it well under control. Caterpillars of the phycitid moth, Stathmopoda melanochra Meyrick, may also be found feeding on this scale insect. Both these predators were introduced from Australia. Birds such as blackbirds, thrushes, fantails, silvereyes, and tuis have been seen to eat the gum-tree scale.

Chemical control is usually unnecessary, since severe infestations soon subside naturally. For specimen trees a spray recommended for the control of sapsucking insects can be used. A spreader should be added and a second spraying done within 2-3 weeks to kill nymphs which may have hatched from eggs after the first spraying. 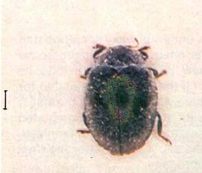 Fig. 3 - Groups of larvae of R. ventralis feeding on the gum-tree scale.