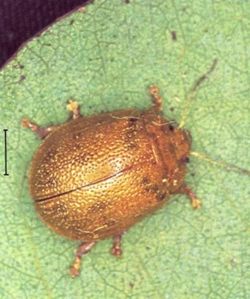 Type of injury
Feeding by adults and larvae of Paropsis charybdis gives leaves of eucalypts a scalloped appearance (Fig. 2). The larvae prefer the young foliage and shoots, but the adults are less selective and can be found feeding on older foliage as well. Heavy defoliation causes the tops of trees to have a scruffy appearance with many bare twigs (Fig. 3). Repeated defoliation may cause the death of the tree. 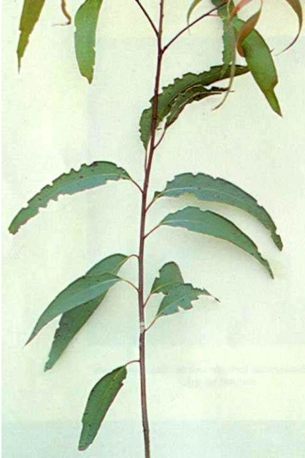 
Hosts
Most species of Eucalyptus grown in New Zealand can be  defoliated to some extent by this tortoise beetle but oviposition (egg laying), and consequent larval damage, is largely restricted to eucalypts in the sub-genus Symphyomyrtus, Section Maidenaria, e.g. Eucalyptus globulus, E. viminalis  and E. nitens. 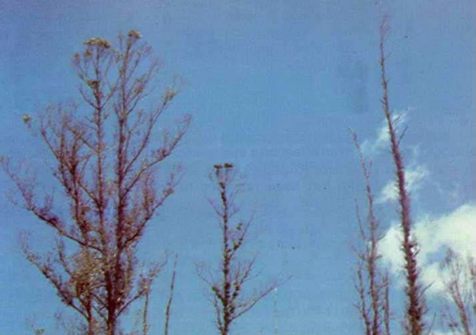 Distribution
Paropsis charybdis is an Australian insect and was first recorded in New Zealand from the Port Hills, Christchurch, in 1916. It is now found throughout New Zealand wherever eucalypts are grown. In Australia it is a rare insect, but whether this is because of competition with other species of Paropsis or because of a high rate of parasitism has not been established.

Economic importance
This insect is regarded as the most serious defoliator of eucalypts in New Zealand. Frequent and severe defoliation of E. globulus, E. viminalis, and E. macarthurii has virtually curtailed the planting of these species. Eucalyptus nitens plantations are also frequently damaged, and chemical control is often used.

Description, life history, and habits
The beetle, which is 8-14 mm long, is stout and strongly convex and has a distinct tortoise-like shape. It varies from straw-coloured to reddish-brown, with darker marks on the back (Fig. 1).The fully grown larva (Fig. 4) is usually yellowish but sometimes pinkish, is covered with black spots, and has a dark stripe running down each side. When disturbed or alarmed the larva extrudes a pair of horn-like processes from near the rear end and ejects a strong-smelling spray. 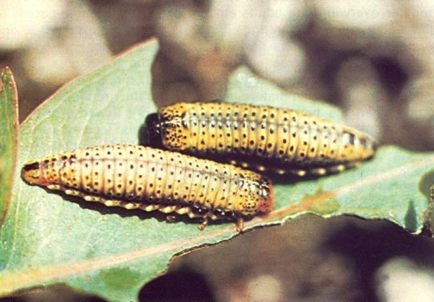 The only other insects which might be confused with  Paropsis charybdis are other Australian tortoise beetles, Trachymela sloanei (Blackburn), and T. catenata (Chapuis). Adult Trachymela catenata are 6-8 mm long, dark brown, and covered with a fawn, flour-like dusting. At present they are only know from the Gisborne region. Trachymela sloanei are more widespread. Adults are 6-8 mm long with a mottled markings of black on fawn. Both adults and larvae feed at night, and during the day hide under loose bark.

Adult P. charybdis overwinter in the leaf litter or under loose bark, emerging in spring before feeding and beginning oviposition. The date of emergence varies with location and temperature. Males are not ready to mate immediately upon emerging from overwintering, however females begin oviposition about two weeks after emergence whether mated or not. This can result in a large number of infertile eggs at the beginning of laying. In the laboratory, females are capable of laying 1500-2000 eggs in batches of 10-30 (Fig. 5) over several months in the laboratory, ensuring continuity of eggs throughout the season.

Eggs take about 14-21 days to hatch in the field (Styles, 1970). There are four larval stages (instars). Young larvae feed around the edges of new leaves and are gregarious only during the 1st instar after which they disperse. Late instar larvae feed on both mature foliage and young shoots before dropping to pupate in the leaf litter below, and emerge as second generation adults 7-9 weeks after oviposition. There are two generations of Paropsis charybdis per year. 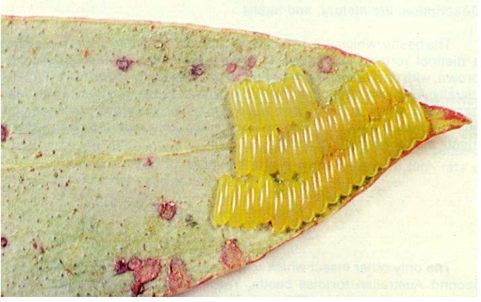 Control
Chemical control by the aerial application of an insecticide, such as the broad spectrum alpha-cypermethrin, is available for control of Paropsis charybdis. However, only short-term control can be expected as the insecticide does not prevent re-infestation from outside areas or from the second generation. In addition, broad spectrum insecticides are likely to disrupt natural enemies.

Predators of P. charybdis in New Zealand include the pentatomids Crematulus nasalis (Westwood) and Oechalia schellembergi (Guérin-Menéville) however both have only one generation per year and are therefore unable to respond sufficiently to affect the first P. charybdis generation. The German wasp, birds and hedgehogs may also feed on P. charybdis larvae and pupae in the soil, but are likely to have only minimal impact on the population (Clarke, 1930; Styles, 1970). Predation in general is considered unlikely to be of practical significance for the control of P. charybdis in New Zealand.

In the 1970s and 1980s four natural enemies of P. charybdis were introduced to New Zealand for biological control. Two of these, the parasitic fly Froggattimyia tillyardi Malloch and the parasitic wasp Neopolycystus sp., did not establish (Bain & Kay 1989). A predatory ladybird, Cleobora mellyi Mulsant, which feeds on eggs and larvae of P. charybdis, established successfully although it currently has a limited distribution (Murray et al. 2008). The final species, Enoggera nassaui (Girault), established well and is now present through much of the country (Murray et al. 2008). This parasitoid successfully controlled P. charybdis in many regions (Kay 1990), however a self introduced hyperparasitoid Baeoanusia albifunicle (Girault) was found attacking E. nassaui in 2002 (Berry 2003). Neopolycystus insectifurax Girault is a self-introduced parasitoid of P. charybdis first recorded in New Zealand in 2002. Neopolycystus insectifurax is not susceptible to hyperparasitism by B. albifunicle and may boost biological control of the second P. charybdis generation in late summer (Murray et al. 2008).

Some species of eucalypts are far less susceptible to defoliation than others. It should be possible to minimise the damage caused by the beetle by planting unpalatable species such as E. fastigata, E. delegatensis, and E. regnans.