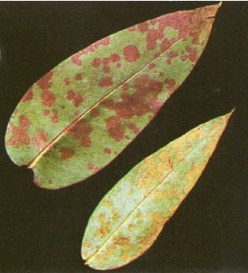 Diagnostic features
Pale yellow spots on both sides of the leaf. Spot colour soon changes to a deep carmine-red and finally to brown with a residual carmine margin. Lesions regular in shape, often merging together and covering large areas of the leaf. Exuded spore masses visible on the lesions as minute dark - coloured spots.

Distribution
Throughout New Zealand. First found in the central North Island in 1981, Kirramyces eucalypti had reached Southland by 2008.

Disease development
Studies have been conducted mainly on Eucalyptus nitens which produces foliage during most of the year in the central North Island. New leaves emerging in spring become infected, probably by means of spores released from infected, residual, previous season's foliage. Microscopic fruiting bodies are formed early within newly infected leaves and exude spores as a sticky mass on the surface. They are apparently dispersed by rain splash, but the early appearance of spots on leaves in isolated, newly planted stands suggests they are also airborne, possibly in aerosols. Juvenile leaves become resistant after the first few weeks, but infected foliage continues to produce spores. On warmer sites an epidemic builds up throughout spring and summer, which only slows down as the production of new leaves and spores declines in autumn. Both juvenile and mature leaves are affected, but the latter only in severely infected stands, probably from an abundance of spores dispersed from diseased juvenile foliage. In such stands infected leaves are shed within one year. This leads to the production of epicormic shoots whose leaves are also susceptible, and complete transition to the adult phase is delayed.

Economic importance
Septoria leaf blight causes moderate to severe growth loss, depending on the region. A survey of E. nitens stands conducted in 2005 in the Rotorua-Bay of Plenty area revealed that the disease was most severe within 20 km of the coast where the climate was milder (mean annual temperature greater than ca. 12-13oC). Disease severity was generally low in inland plantations where it was cooler, but there were local topographic effects; trees were often heavily diseased on valley floors, level tops and south facing slopes. Septoria leaf blight, together with attack by the eucalyptus tortoise beetle, Paropsis charybdis, has contributed to the demise of a venture to produce fast growing hardwood fibre for pulp from young Eucalyptus nitens plantations in the Bay of Plenty and central North Island.

Control
There appears to be little potential for an operational fungicidal control of this disease. While several fungicides have shown promise when applied regularly to runoff under experimental conditions, a single aerial spray application was unsuccessful. The ongoing steady progression of recurrent infection as new leaves continue to emerge during spring and summer means that effective control would require a large number of regular applications of fungicide which is unlikely to be economic.

Genetics field trials have indicated that many families of E. nitens from Victoria are susceptiple to the disease. Stock from New South Wales was less affected, but tended to grow more slowly. Therefore E. nitens should not be planted on sites that are likely to be more disease prone, but instead a different eucalypt or other tree species should be substituted.