In parts of New Zealand young plantations of Eucalyptus nitens are affected by a disease known as septoria leaf blight. Juvenile leaves, in particular, are disfigured by yellow spots that turn bright
crimson and eventually brown, before being cast prematurely later in the same season. These symptoms are caused by the fungus Phaeophleospora eucalypti (formerly known as Septoria ). 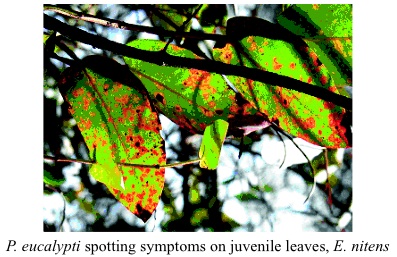 Although this pathogen was first found in New Zealand in 1981, the disease did not become important until blocks of E. nitens were established more widely during the 1990s. Research revealed that the disease builds up epidemically during spring and summer in the worst-affected stands. Control by aerial spraying with fungicide appears unpromising and preliminary results from a field trial suggest that it may be better to plant a more resistant eucalypt species on disease-prone sites than to persevere with E. nitens. To help identify these risk areas, a survey was conducted in the Bay of Plenty and central North Island regions.

Altogether 49, 8- to 12-year-old blocks of E.nitens were inspected and scored for P. eucalypti infection and for health condition. Stands were rated as unhealthy (score 1.0) if many trees bore only juvenile and epicormic foliage, which was moderately or heavily infected by P. eucalypti . If stands had deep, dense, adult crowns with mature foliage on most trees, and infection was still medium or high on the less common juvenile and epicormic foliage, they were classed as intermediate (2.0). When unhealthy stands were present within predominantly intermediate category blocks, the score was adjusted accordingly. Healthy blocks (3.0) were those that resembled intermediate stands, but infection was absent. Maps were prepared from GIS data in order to relate health and infection to regional climate.

Phaeophleospora eucalypti infection was found to be widespread, especially on juvenile and epicormic foliage, indicating that rainfall and temperatures are suitable for the fungus to infect and develop throughout the survey region. On the other hand, stand health appeared to depend on temperature. Unhealthy Type 1 blocks were prevalent in a warmer climate zone near the coast, whereas the healthier, predominantly Type 2 stands were more typical of the cooler sites at higher elevations further inland. No healthy Type 3 blocks were found during the survey, though they are the norm in the southern South Island.

Since P. eucalypti is considered to be the cause of this disease, why is stand health poorer near the coast, even though the fungus is still common in the colder inland sites? The coastal climate is milder than in the native range of E. nitens in continental Australia, so these warmer conditions may prolong the susceptible juvenile state for a longer period. In addition, the fungus may be more damaging at these higher temperatures. The severe casting of the diseased juvenile leaves, and the production of epicormic recovery shoots, may also in some way check the normal switch from the juvenile to the adult form on many trees. Conversely, the natural change to mature foliage observed in the inland blocks appears beneficial, since the reduced proportion of infected juvenile and epicormic leaves will lead to lower spore levels.

The results from this survey suggest that E. nitens from Victoria should not be cultivated within a zone 20 km from the coast in the Bay of Plenty region. Further inland it should be established only on slopes, avoiding ridge tops or valley floors, especially those on a south-facing aspect. These recommendations are contingent on findings from growth measurement data which would provide a surer basis for determining the productivity of E. nitens and deciding the merits of planting it in this region. For further details, see NZ Tree Grower 27(3): 36-37, 39 (2006).