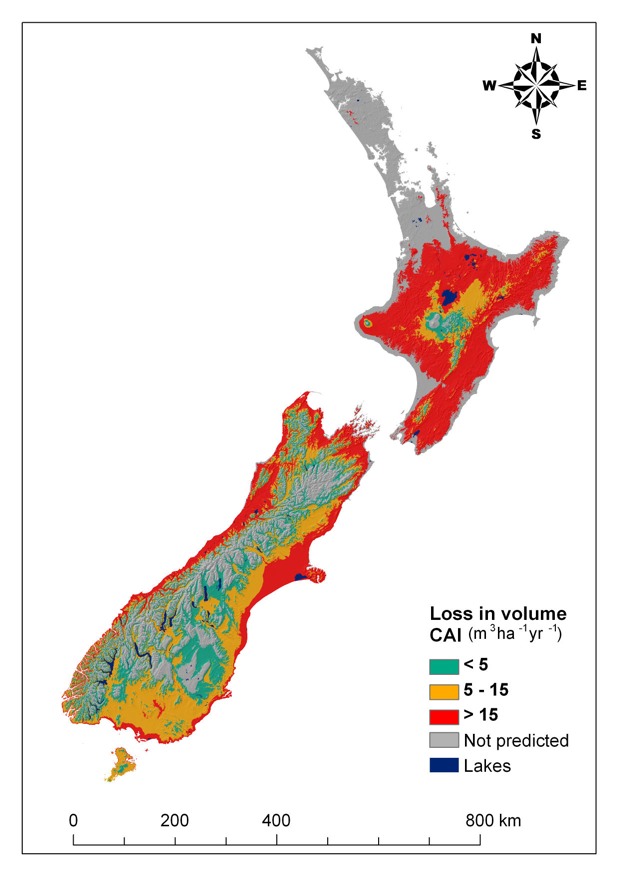 Phaeocryptopus gaeumannii, the cause of Swiss needle cast of Douglas fir (Pseudotsuga menziesii), has been present in New Zealand for more than 50 years. Although much is now known about this disease, important questions remain. Firstly, symptoms are not spectacular, raising questions about its real importance. Stands still look green so does infection really reduce growth, and if so by how much? Secondly, direct control using aerial spraying is not economic, so what is the best way to manage it? In particular, are there regions in New Zealand where improved varieties of Douglas fir can be established without being too severely affected by the disease?

Trials are currently underway at Scion to see if less susceptible lines can be found for planting in such areas. These important questions have been addressed through a programme of research which involved a number of people with a variety of skills over the past five years. In particular, this included a valuable collaborative project between Scion and Oregon State University that investigated the effect of climate on the disease in different parts of New Zealand. Also critical to the project was the assistance given by many Douglas fir growers and other industry people.

Douglas fir stands of approximately the same age (ca. 10 years old) were sampled two years apart at 34 sites throughout New Zealand in order to collect data on infection abundance (the proportion of needle stomata with fungal fruiting bodies) and disease severity (the level of foliage retention) at each location. Where possible, trees were chosen from among three widely-planted seedlots so as to eliminate any potential effect of genetic variation in host resistance. These data were combined with national meteorological data in order to identify and model relationships.

Results confirmed a linear association between site infection and the average temperature in June (infection was lower where it was cooler during winter). Analyses also disclosed a more complex relationship with November (late spring) rainfall. Both relationships taken together accounted for 64% of the variation in infection.

There was also a significant negative linear association between predicted infection abundance and site foliage retention (the greater the infection the lower the retention). Using the available spatial climate data this information was modelled to predict and map both the abundance of infection by P. gaeumannii and the level of foliage retention in Douglas fir stands in different regions throughout the country. A greater disease effect was apparent in the North Island than in the South Island, with regional predictions of foliage retention varying between 40 and 70% in the former and 70 and 100% in the latter.

A complementary study to investigate the effect of Swiss needle cast on growth of Douglas fir in New Zealand was also completed as part of this research (see FH News 114:1-2). Historic growth measurements from permanent sample plots were compared with records of when P. gaeumannii first appeared in Douglas fir plantations during the 30 years it steadily spread throughout the country following its discovery near Taupo in 1959. Analyses indicated a gradual decline in volume growth increment within each forest over a period of 15 years after infection was first detected. The cumulative reduction in volume increment averaged 32% across the country, but was greater in the North Island (35%) than the South Island (23%).
Using spatial climate data, an association between growth reduction and temperature in late spring was identified, with less disease growth effects on cooler sites. Growth reduction was negligible on sites with average daily minimum October temperatures below 3.2oC. A map showing the predicted growth loss caused by the disease showed a similar regional distribution to the maps of infection and foliage retention produced in the first study (see above).

It should be emphasized that these predictions were obtained from historic data and growth losses in contemporary stands may be influenced by tree breeding and the use of genetically improved planting stock. Even so, the study has revealed the true severity of the disease on Douglas fir in New Zealand. Despite this, there are still regions where this species can be grown with minimal disease effects (see map). When taken together, the information from the two independent studies provides a firm basis for identifying these areas.

More detailed information may be found in the following two publications: