Phaeocryptopus gaeumannii, the cause of Swiss needle cast disease of Douglas-fir, was first found in New Zealand near Taupo in 1959. A survey throughout the country revealed that at that time this needle parasite was present only in the Rotorua-Bay of Plenty region, and in parts of the Waikato and Hawkes Bay. In the 1960s and 1970s, there was much concern about the unthrifty and chlorotic appearance of many older Douglas-fir stands in the central North Island, particularly in Kaingaroa Forest. Considerable debate ensued about the cause of the disorder, particularly when it became apparent that annual growth production was substantially below that predicted in yield tables. 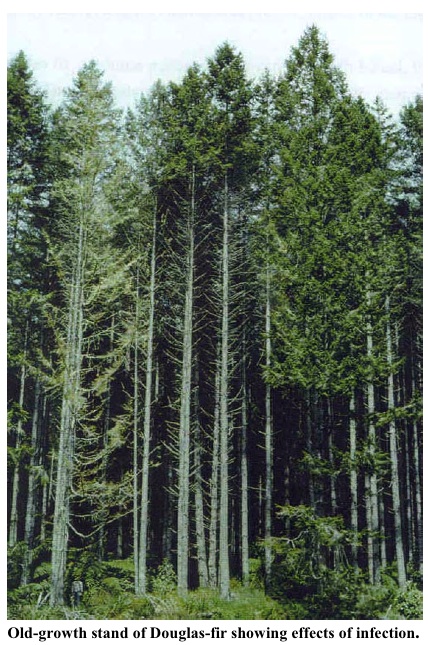 The future of Douglas-fir became the subject of a New Zealand Forest Service Symposium in September, 1974. It gradually became evident from the accumulated results of a number of field and glasshouse studies that the loss in growth increment in Kaingaroa Forest was associated with the introduction and spread of P. gaeumannii. However, until recently, information had been lacking for stands in other parts of New Zealand.

Following its initial discovery, careful records were kept of the distribution of the causal fungus based on laboratory examination of samples collected by surveillance officers. It took approximately three decades for P. gaeumannii to spread through most of the country, and it is known with some precision when infection first reached many forests. It was decided to make use of this information to investigate the impact of the fungus by examining data from the 1500 permanent sample plots in New Zealand Douglas-fir stands, in relation to the onset of infection. Measurement dates were standardised by converting them to numbers of years since or prior to the first observance of the fungus in each forest. The data were then analysed as two discrete sets for the significance in growth difference between records before and after infection, respectively. This was done by calculating the Site Basal Area Potential (SBAP) representing the basal area increment of a fully stocked stand at around 30 years of age. The SBAP can be thought of as a growth potential factor analogous to site index but applicable to basal area instead of height. It is independent of stocking density.

The results, summarised in the graph below, show that a clear reduction in site basal area growth potential occurred in different forests following the appearance of the Swiss needle cast disease fungus. The gradual decline to the lower plateau over a period of several years is consistent with the slow build up of infection that is known to occur as the fungus invades new forests.

Further analyses were undertaken to determine whether there were regional differences in the growth reduction. Some of the initial results are presented in the table below which shows four forests containing significant numbers of plots with measurements taken both before and after the introduction of the disease. The tabulated percentage change in mean SBAP is derived from data collected before the appearance of the disease in each forest, and from that taken during the period from 10 years after. 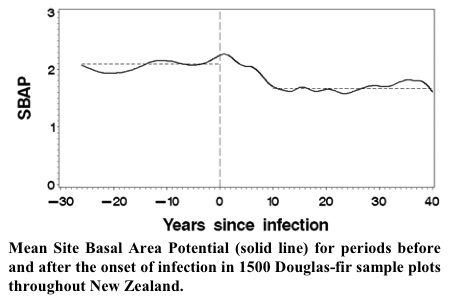 The average reduction in SBAP across the country following the appearance of the disease was 20%, which would translate into a similar decline in volume growth per ha. However, because smaller diameter logs have a lower value per m3, the decrease in log value would be somewhat greater. STANDPAK simulations indicate that a 20% reduction in the SBAP would correspond to a 26% decrease in log value per ha, assuming a 45-year rotation with waste-thinning and typical log prices.

This analysis was made possible using a new model for predicting the growth of Douglas-fir in New Zealand which uses the SBAP as an index for basal area growth. Because it was apparent that there had been a substantial decrease in growth after the advent of the disease, the model incorporates only post-infection data. However, it can be used to estimate the SBAP from plot measurement data, and hence to quantify the effect of the disease as shown above.

The results of this work will be published in full after further analyses are completed, but in the meantime a number of conclusions may be drawn. Strong evidence is provided confirming that Phaeocryptopus gaeumannii is the direct cause of growth loss in Douglas-fir in New Zealand. The loss in growth is substantial, and has significantly reduced the profitability of growing Douglas-fir. However, there are indications that there are regions in the country where the disease is less of a problem. There are also grounds for optimism that breeding and selection may enable most of the lost growth potential to be recouped. The current move to using seed sources originating from the Californian fog belt should go a long way towards offsetting the effects of the disease.