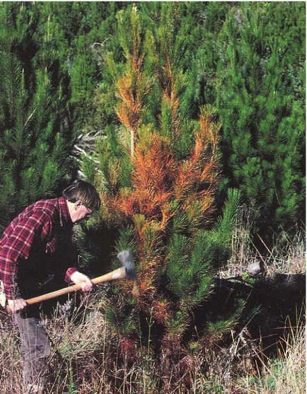 Fig. 1 - A young Pinus radiata tree exhibiting the characteristic symptoms of junghuhnia root disease:
an uneven distribution of yellowing and browning branches in the crown.

Type of injury
Death of trees, singly or occasionally in small groups. 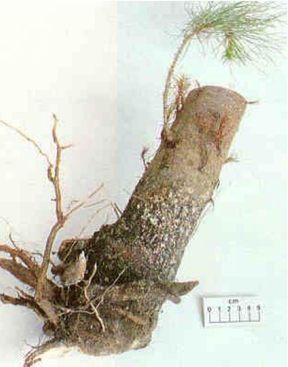 Fig. 2 - Pads of white and pink fungal tissue produced on bark at the base of a young Pinus radiata tree infected by Juhnghuhnia vincta. 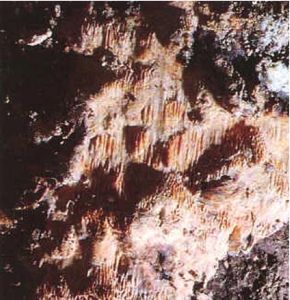 Host Trees: It is probable that the host range for both parasitic attack and non-parasitic presence is much wider than has been recorded.

A pathogenicity test on 2-year-old trees from seven genera (10 species) showed that different hosts vary in their degree of susceptibility to J. vincta . Cryptomeria japonica seedlings in this trial were extremely susceptible (Fig. 4), cypresses (Chamaecyparis lawsoniana, Cupressus macrocarpa, Thuja plicata) were not as badly affected and Pinus radiata plants were, in comparison, only moderately susceptible. Four Eucalyptus species tested were generally unaffected.

Distribution
First recorded in New Zealand in 1886 by Colenso but subsequent records are sparse. Most are from locations north of a line between Gisborne and New Plymouth.

Disease development
In exotic pine plantations mortality caused by J. vincta periodically occurs in areas recently converted from indigenous forest. Trees become infected when a root or part of the stem comes in contact with buried woody material colonised by the fungus, or with roots of an already diseased plant. Infection takes place more readily if the host tissue has been wounded or damaged. The fungus grows slowly within living tissue but once the tissue is killed, a white spongy wood decay rapidly develops. Eventually thin black zone lines develop within the decayed wood, and flecks and small pads of fungal tissue appear on the outside of the bark. Fruiting bodies may form just above soil level.

Junghuhnia root disease also affects trees and woody shrubs established on sites that have not previously held native forest for a long time, such as farmland, and it also occurs in some horticultural and even urban situations. Apparently spores released from fruiting bodies spread the fungus as they disperse, colonise wood debris or stumps, from which infection spreads to living plants, and so
establishes new disease centres. 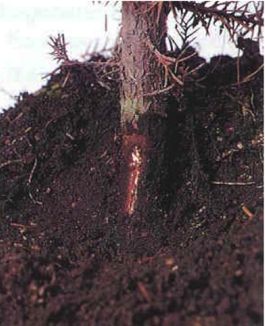 Economic importance
Although the impact of this disease on forestry is difficult to assess, it is probably not great. It is now clear that a small proportion of the mortality attributed to armillaria root disease over the past 50 years was in fact caused by J. vincta. Junghuhnia vincta is one of the fungi responsible for "white crown canker" root disease, which causes mortality of orchard shelterbelt trees in the Bay of Plenty. Exposure to wind through the gaps created in these shelterbelts adversely affects the productivity of subtropical fruit plantings. The fungus may have survived on roots and woody material in the soil after the native forest cover was felled, allowing it to infect live plants or colonise dead woody matter in Berberis glaucocarpa (barberry) hedges, and then spread to the taller shelter belt trees. However, it is also likely that new infection centres may become established by means of spores from nearby residual indigenous forest.

Control
Not investigated, but not considered necessary in view of the probable low incidence of the disease.