(Note: These two fungi were collectively referred to as Armillaria mellea in old records. Two other species, A. hinnulea Kile & Watling and Armillaria sp., are found only in Nothofagus or beech forest and their ability to cause disease in this country is unknown).

Type of injury
The fungi infect the root system and lower stem of the tree host. Mortality of young trees may occur or growth may be reduced.

Armillaria novae-zelandiae:
Cap <8 cm, yellowish-brown to reddish-brown, viscid when fresh, and with radial striations; gills white or pinkish; ring present; stalk dark to purplish-brown, tapering and darkening towards the base (Fig. 5). 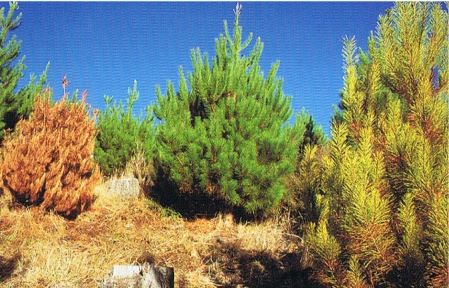 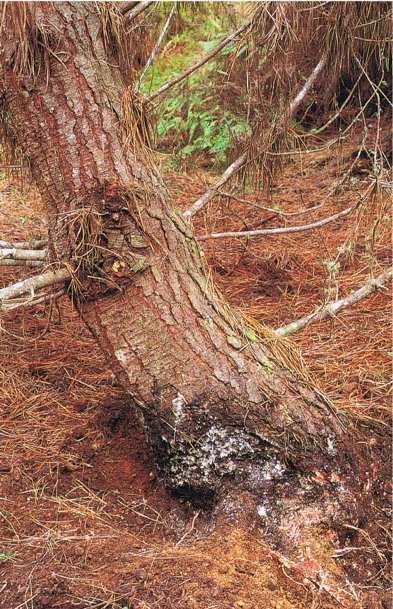 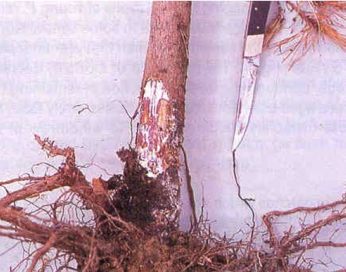 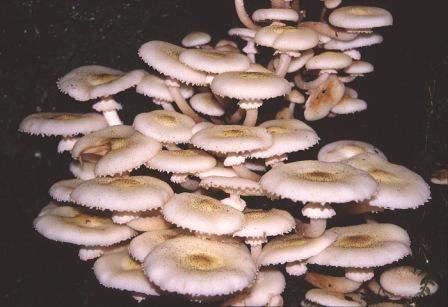 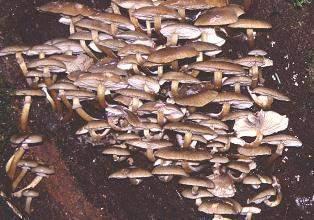 Hosts
A large number of both indigenous and exotic plants are susceptible to parasitism and attack by Armillaria spp., while in others they are reported to have caused decay. In the following lists no distinction is made as to the species of Armillaria involved.

Non-parasitic or not specified (potentially parasitic):

Distribution
Armillaria spp. are widespread in New Zealand (Fig. 6) and occur naturally in indigenous forests, both beech and podocarp/broadleaf. A. novae-zelandiae is distributed over the whole country, while A. limonea is known in the North Island and has been confirmed in the northern South Island. Mortality in Pinus radiata caused by these fungi is found throughout the North Island and much of the South Island, particularly in the Coromandel Peninsula, the central North Island, Nelson, Westland and Southland. It is most prevalent on sites once occupied by native forests, but also occurs at other locations. 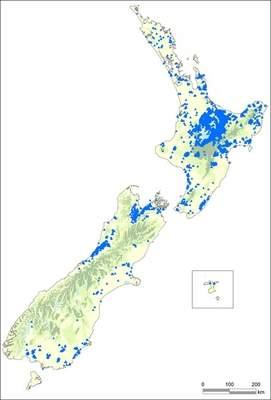 Fig. 6 - Records of parasitic and non-parasitic Armillaria. No distinction is made as to the species involved. (Armillaria is also known to occur in indigenous forests in Westland and Fiordland.)

Disease development
Armillaria spp. are present mainly as saprophytes in indigenous forests. They cause a characteristic heart rot in living native trees, and are also widespread in coarse woody debris. Wood decayed by these fungi is wet, yellowish, and divided into large pockets by black lines.

Fruiting bodies are produced in native forests between May and July. They are found on rotten logs, snags or other decaying debris, and occasionally appear near the base of living trees. They occur singly, in small clusters, or in dense groups that can be up to 5 m wide. Fruiting bodies have also been observed on the stumps of recently felled trees of introduced species. They are rarely found at the base of young killed pine trees. Fruiting bodies release large numbers of spores that frequently dust the immediate surroundings with a white powder. Spores disperse and are important for establishing new colonies in fresh logs or stumps. Local spread of the fungi takes place in undisturbed indigenous forests when rhizomorphs from colonised stumps and roots grow through the soil and come into contact with nearby wood debris.

Historically, when indigenous forests were clearfelled for establishing pine plantations, many new stumps became colonised by Armillaria spp. and the fungi soon became widespread. Rhizomorphs and mycelial fans could be found on new stumps within one year of clear felling and many pine seedlings became infected (Fig. 7). Today infection is perpetuated between rotations of pine stands in much the same way. Young plants are infected when their roots come into contact with rhizomorphs produced from stumps or debris of the previous crop (Fig. 8). The invading fungus spreads along roots beneath the bark in the form of white fan-like mycelial sheets. Attack to living conifer tissue induces resin bleeding. Diseased trees wilt and may die, since the destruction of living tissues in the root collar region interferes with water translocation. Once trees have been killed Armillaria spp. spread rapidly, colonising and decaying dead root and stem tissues (Fig. 9). Mycelial fans may be observed up to a metre or more above ground level when bark is peeled from stems of killed trees. This type of colonisation does not produce resin bleeding. 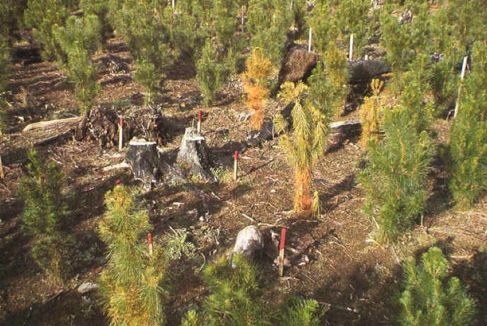 Fig. 7 - Early photograph of mortality in Pinus radiata planted around two small tawa stumps (Beilschmiedia tawa), which later bore fruiting bodies of A. novae-zelandiae, on a site cleared of indigenous forest. The red-topped pegs indicate spots where other trees were already killed by Armillaria. 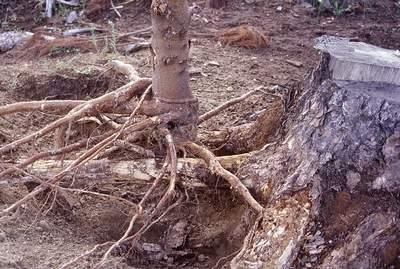 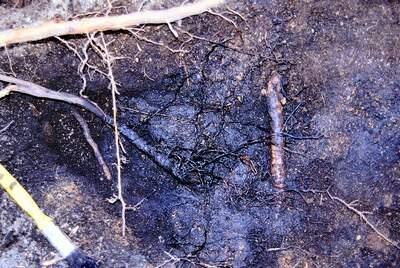 Fig. 8 - Excavated root systems ((a) and (b)) showing rhizomorphs connecting root of young pine ((b) lower) with those of previous crop stump colonised by Armillaria. 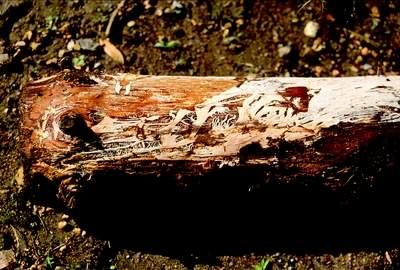 Older trees are more resistant to attack and mortality declines after pine trees are about 6 years old. However, infection continues on in many green and seemingly healthy trees throughout the rotation period in a chronic or non-lethal form. The fungus grows within the bark around the stem base below soil level in the living tree. From here it periodically invades the deeper tissues, and the host responds by producing resin and new healthy wood that surrounds and isolates the regions of infection. When a stand is thinned or clearfelled the stumps of infected trees quickly become colonised by the fungus that is already present.

Armillaria spp. are normally not found in plantations established on sites previously covered in pasture, but may occur in the next rotation if germinating spores, especially of A. novae-zelandiae, invade and colonise stumps of the first tree crop.

Economic importance
Previously, when young P. radiata was planted on sites cleared of indigenous forest, the impact of this disease was severe. In some central North Island forests the fungi killed 10% of the seedlings in their first year after planting and more than 50% within 5 years. In 1983 it was estimated that 50 000 ha of the first rotation P. radiata plantations was affected by Armillaria spp. leading to an ongoing annual shortfall in the national harvest assessed at $37 million in 2000. This was based on a 21% volume production deficit due to early mortality (which occurred in patches creating gaps centred on large stumps of indigenous trees), with an additional 4% reduction due to reduced annual growth increment on remaining infected living trees. Some losses also occurred as a result of windthrow or leaning, due to the instability caused by rotting of the roots.

Today, mortality is generally scattered and of low incidence in second rotation pine stands ie. less than 5% during the first two years after planting. Nevertheless, there is still a small growth loss due to non-lethal infection on residual trees. It was thus estimated that the national deficit in present and future stands would continue to be high because of the increased plantation area and an indication that A. novae-zelandiae is spreading into new stands by means of spores (the extent of this trend is currently being investigated). However, it was recently discovered that the early volume growth loss does not persist right through to the end of the full rotation period, apparently because of the increased resistance of the older trees. This means that the overall volume deficit in contemporary plantations is almost certainly less than was previously thought.

Despite this, mortality in some second rotation stands has been high (Fig. 10), and Armillaria spp. will continue to cause concern under particular circumstances. There is a tension between the inoculum potential or “energy” of the fungus (which is affected by the amount of supporting woody substrate which acts as a food base) and the resistance of the host. This balance can be adversely affected by changes in management, with unexpected consequences. Mortality was once as high as 40% in a second rotation forest previously stocked with P. ponderosa, P. nigra and P. contorta on which poison thinning was carried out ca. 20 years before harvest. Serious decline in chronically infested late rotation stands has resulted from stress associated with copiously applied waste water irrigation. Excessive pruning stress may also be fatal to infected trees. Mortality due to Armillaria spp. has been high in some pine stands that replaced crops of eucalypts, possibly because eucalypt stumps appear to provide a better food substrate for Armillaria spp. 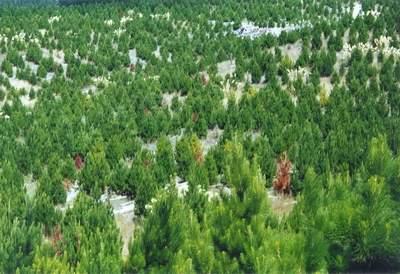 Armillaria spp. also attack and infect Pseudotsuga menziesii and Eucalyptus spp. but the mortality rates for these species are much lower than those for P. radiata.

Control
No treatment is necessary when a new plantation is established on a site that has been in pasture or other herbaceous vegetation for a number of years. However, on land that has been previously stocked in a woody crop, especially if there is a history of armillaria root disease, control is accomplished by removing the stumps prior to planting. Trials have shown that a reduction in mortality of more than 30% can be achieved with this course of action. Before applying this treatment, a judgement is necessary as to whether the potential savings in disease control will outweigh the increased establishment costs due to stump removal. In typical modern plantations, control measures are probably only justified if mortality from Armillaria spp. was severe early in the previous rotation. It is therefore important to keep good stand records that will flag when a decision may be necessary prior to planting a new crop. Even if action is not taken, forest owners should be aware of the presence of the fungi, especially if there is a chance that a change of management practice could inadvertently lead to an increase in disease impact.

Stump removal is preventative, and there is currently no validated treatment available for a plantation that has become infested. Other approaches have therefore been investigated either to remedy an already diseased stand or to reduce treatment costs at the time of establishment. Research indicates that no control benefit is achieved through thinning and it is possible that this treatment could worsen the impact in a severely diseased plantation. Managers should therefore be cautious about operations such as thinning or excessive pruning, and dothistroma needle blight should also be kept low (see Forest Pathology in New Zealand No. 5) in stands known to be infested by Armillaria spp. Significant levels of disease control early in the rotation have been demonstrated through treatment of root systems with a biological control agent prior to planting and by establishing with healthy, vigorous seedling or cutting stock. Therefore the use of these approaches is probably warranted on infested sites, even though their longer term benefits are unknown and they do not directly remove Armillaria spp. from the soil.