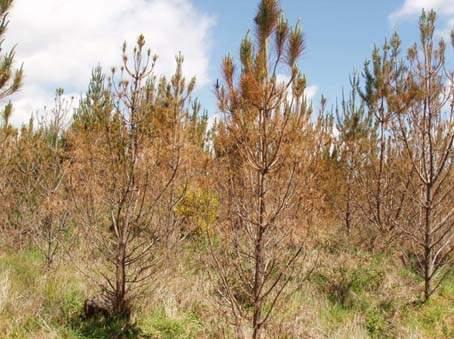 Hosts
Dothistroma has many hosts with about 80 recorded. Pinus is the most commonly represented host genus, but Dothistroma has been recorded on several Picea spp, Pseudotsuga menziesii, and Larix decidua.

Hosts vary widely in their susceptibility to Dothistroma needle blight. The following host susceptibility list has been developed based on observations and field trials. 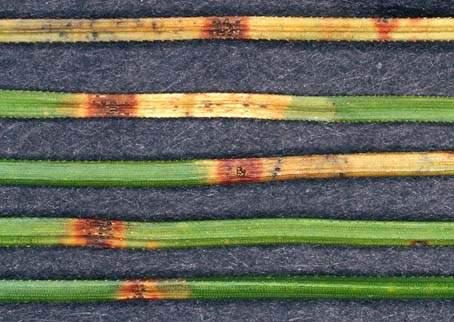 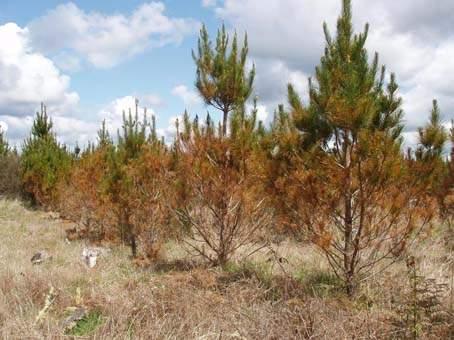 Fig. 3 – Moderate to severe disease on the lower part of trees. Note bare branches at base resulting from defoliation over several consecutive years.

Distribution
Dothistroma needle blight was first observed near Tokoroa in 1962 as a chronic necrotic condition in young P. radiata plantations and in a trial plot of a P. attenuata x P. radiata hybrid planted in 1952. By the late 1960s the disease was recorded through most of the North Island. It was first seen in Nelson in 1966, and had spread to Southland by 1979 and was first recorded in Canterbury in the early 1980s. Otago Lakes and Mackenzie Country were the last regions to become infected in the late 1990s. In the early 1960s transport of infected seedlings was an important means of spread. The disease is now present throughout New Zealand wherever suitable hosts are grown (Fig. 4). 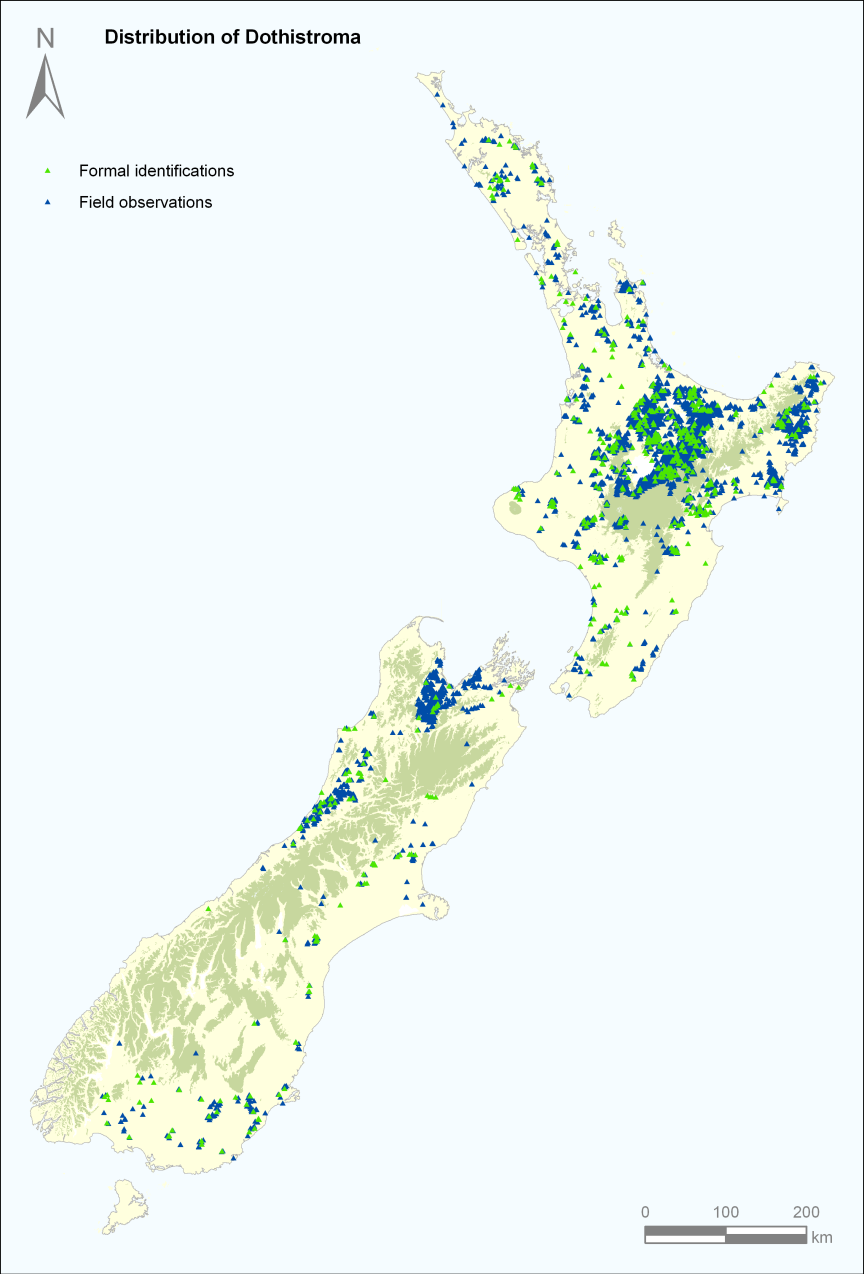 Fig. 4 – Distribution of Dothistroma in New Zealand in May 2008

Disease development
Asexual spores are produced in fruit bodies and are primarily dispersed by splash of water droplets (Fig. 5). The lower branches are thus subjected to more inoculum and this explains the within-tree distribution of disease whereby the lower crown is more severely affected than the upper crown. After landing on a needle, under favourable conditions (moisture present and temperature 18-20°), spores germinate and penetrate the needle through the stomata (Fig. 6) within 2-3 days. Further fungal growth occurs in the needle tissue if the needle surface is wet. Lateral spread of the fungus is limited to a few millimetres but a much larger lesion is formed. After some time, the fungus forms fruit bodies that erupt through the needle surface and liberate spores in periods of wetness to continue the infection cycle.

Fig. 5 – A droplet about to fall off an infected needle.


The period from spore germination to fruit body production depends on temperature, length of the needle-wetness period, and inoculum density. In the field, new infection has been observed after 4½ weeks when temperatures exceeded 18°, and in controlled conditions can be a short as 2½ weeks when foliage was kept continuously moist and day/night temperatures were 24°/16°. Infection can occur in winter at 7°, but disease development is very slow at around 4 months. Infection has been shown to occur after inoculation with approximately 2000 conidia per needle.

The usual progress of the disease on individual trees growing in the central North Island is as follows. Very little or no new infection occurs between May and August because of low temperatures. In September as temperatures rise, new infections occur from the infected needles that are left in the tree crowns, but their number is not large. At daily mean temperatures around 16° C, a development period of about 6-10 weeks elapses before fruit bodies begin to appear on newly infected needles. This can occur anywhere from late October to early December, depending on rainfall. Spores produced on these fruiting bodies provide the inoculum for the first major infection. Temperatures in early summer are near-optimal for infection and if the weather is wet, there will be a large increase in disease level. Fruiting bodies produced from October/December infections appear in January/February and a second cycle of infection may occur. A third cycle may occur in April. The main infection period thus extends from October to April in central North Island; in warmer parts of New Zealand (e.g. Northland) it begins earlier and in cooler parts (e.g. Southland) it is a little later (late November/early December). Rainfall is the major factor governing disease severity in any given season (Fig 7). 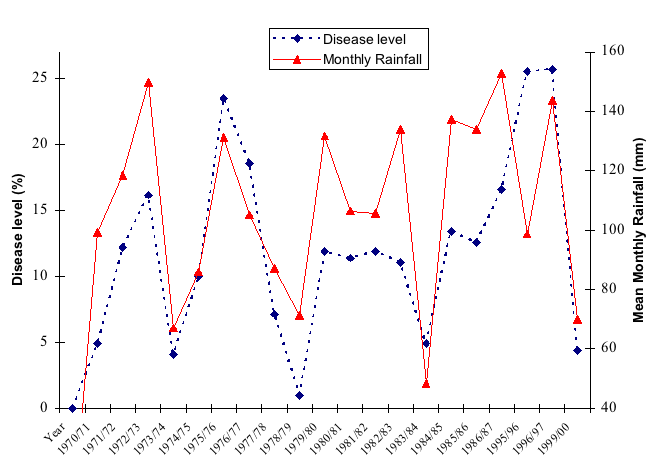 Economic importance
Dothistroma needle blight is one of the most serious diseases of plantation Pinus radiata. The area of susceptible P. radiata sprayed for control in the central North Island varied from just a few thousand hectares over the 1978/79 summer to over 180,000 ha in 2002/03. Control costs vary from year to year due to the price of copper, oil, and application, but from 2000/01 to 2007/08 have averaged $35/ha in 2007 dollars.

The disease causes growth loss and this is its most significant economic impact. On an individual tree basis, reduction in volume increment is directly proportional to the average disease level over a period of at least 3 years. For example, an average disease level of 30% will result in a 30% reduction in volume increment. If average disease is 50% then volume increment will reduce by 50%. Linearity holds until average defoliation reaches 80%, after which growth all but stops. Growth loss lags behind onset of disease, generally by 2 years. On a stand basis, growth loss is more difficult to estimate because compensation of growth occurs where less affected trees can take advantage of the space made available by stunted severely affected trees. Smaller, highly susceptible trees tend to be removed during thinning operations further confusing estimates of the effect of Dothistroma on stand yield. However, one study showed that 30% lower disease levels over 6 years (achieved by spraying annually) gave 6.0m2/ha more basal area than unsprayed controls. That study also showed that height and basal area of the dominant 300 sph did not differ between sprayed and unsprayed treatments. These results suggest that a final-crop component of the stand is relatively unaffected by Dothistroma needle blight when disease remains at low to moderate levels.

Annual loss caused by Dothistroma needle blight is estimated to be in the order of $23 million per year, with cost of control approximately $2 million and the remainder a result of reduced growth.

Management and control
Aerial application of copper fungicide is the most commonly practised form of disease control. Stands are treated when average disease reaches 25% or more, although some forest owners spray when visible infection levels reach 15%. Significant advances have been made with spray application over the years and rates have reduced from 4.16 kg of 50% copper in 50 litres of oil per hectare in the early 1980s to the current recommendation of 1.14 kg 75% copper in 2 litres of mineral oil made up to 5 litres per hectare with water. Research is underway to evaluate vegetable oils and reduced application rates of 3 litres per hectare. The Dothistroma Control Committee organises the spray programme for forest owners and funds research on Dothistroma needle blight. Full details of the spray programme are provided in Forest Research Bulletin No. 229 “Assessment and Control of Dothistroma Needle Blight” (pdf).

Resistance to Dothistroma appears to be moderately heritable and is a trait that has been recognised in the GF Plus scheme developed by the Radiata Pine Breeding Company. Incorporation of resistance into breeding programme is estimated to provide a decrease in average stand infection of 10%.

Thinning and pruning reduce disease. Thinning increases air flow through the stand which reduces the needle wetness period and thus slows the rate of infection. Highly susceptible trees are removed in preference to less susceptible trees, thus reducing inoculum and disease impact. Pruning removes diseased foliage and lowers the amount of inoculum available to initiate new infection. Pruning and maintaining crown separation will suppress disease levels and may avoid the need to spray for several seasons.