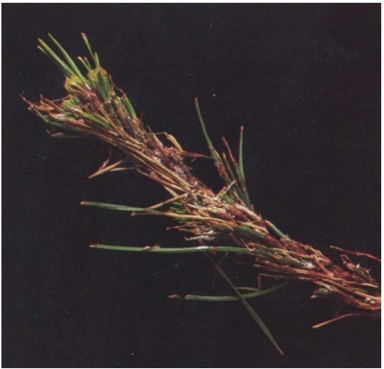 Type of injury
Greenheaded leafroller caterpillars ( Planotortrix excessana), blacklegged leafroller caterpillars (P. notophaea), and caterpillars of the light brown apple moth (Epiphyas postvittana ) feed on leaves, buds, and soft stems whilst sheltering under a webbing of silk and foliage (Fig. 1 and 2). On Pinus (pine), caterpillars of all three species web needles together and form them into a tube. They kill the needles, which then turn brown and hard, by eating part or all of the cuticle. In spring and summer, caterpillars usually feed on foliage, but when many are present the stem and growing point may be chewed. Flowers and green cones may also be damaged. In winter, buds and stems are attacked. Malformation and retardation of growth of young stems may occur as described for Ctenopseustis obliquana, the brownheaded leafroller (Leaflet No. 40).

Hosts
The greenheaded leafroller caterpillar feeds on very many native and introduced forest, orchard, and garden shrubs and trees. It prefers trees with broad leaves or needles and its hosts include Eucalyptus (eucalypts) and Sequoia sempervirens (coast redwood). It may also be found on Pinus radiata (radiata pine) and a few other Pinus species, and on Pseudotsuga menziesii (Douglas fir).

The blacklegged leafroller caterpillar is found on most narrow-leaved native and introduced trees and shrubs. Its hosts include radiata pine and all other Pinus species, and also all other introduced conifers in New Zealand. Preferred native shrub hosts include Kunzea ericoides (kanuka), Leptospermum scoparium (manuka), and Leucopogon. The caterpillar is also occasionally found on broad-leaved plants such as Pittosporum tenuifolium (kohuhu).

The caterpillar of the light brown apple moth, a notorious pest of apple, pear, and citrus orchards, also feeds on a very wide range of native and introduced trees, shrubs, garden flowers, and weeds. In the exotic forest it is found on radiata pine and other Pinus species, Douglas fir, and Picea (spruce).

Distribution
The greenheaded and blacklegged leafrollers are native insects. The light brown apple moth came from Australia and was first discovered in New Zealand in 1891. It has also been recorded from England, Hawaii, New Caledonia and recently found in California, USA. All three species are widely distributed throughout New Zealand. 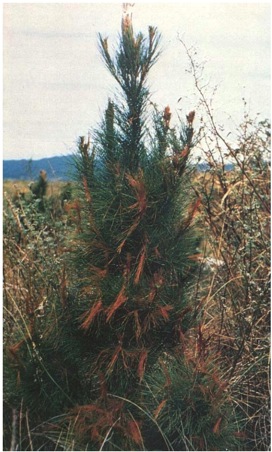 Economic importance
Of these three insects the blacklegged leafroller caterpillar is usually the most damaging to conifers, although caterpillars of the light brown apple moth can also be responsible for a considerable amount of needle-tying and chewing.

Apical bud damage to young trees causes malformation and stunted growth, and this is probably more serious than loss of growth through defoliation. Larch, spruce, and Douglas fir are particularly susceptible to this form of bud damage. In general, leading shoots of radiata pine become malformed only when insect numbers are high or plants are stressed by drought or competition with surrounding vegetation. Attack on leading shoots decreases as tree height increases and rarely occurs once trees are more than 4 years old.

Description, life history, and habits
The colour and markings on the forewings of the adults of the greenheaded and blacklegged leafrollers range from light greyish-fawn to dark chocolate or ginger brown with darker irregular areas and lines which are quite often indistinct (Fig. 3). There is sometimes a small dark spot about two-thirds of the way towards the wingtip, and there may also be a lighter spot closer to the body. The hindwings are much paler than the forewings and are fawn or greyish. The wingspan of the moth of the greenheaded leafroller is 16-30 mm, and that of the blacklegged leafroller 16-23 mm. Males are usually smaller than females and can be distinguished by the tuft of scales at the end of the abdomen. 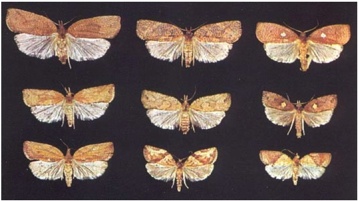 Light brown apple moths are also variable in colour. Typically the forewings are light to reddish brown with a few indistinct dark markings towards the tips. In some moths the part of the forewing nearest the body is pale fawn whilst the remainder is a dark brown (Fig. 3). The hindwings are pale fawn with some darker tonings. Wingspan is 14-26 mm.

In all three adults the edge of the forewing is curved so that at rest they have the bell-shaped outline typical of tortricid moths (Fig. 4). 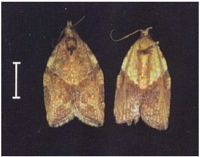 The eggs of all three species are laid on the leaves of the host plant in flat oval masses and covered with a translucent waxy secretion which has a greenish tinge. The caterpillars shed their skins four or five times to reach a final length of up to 25 mm for the greenheaded leafroller or 20 mm for the blacklegged leafroller and light brown apple moth. The fully grown greenheadedleafroller caterpillar (Fig. 5) has a pale green head, an opaque, pale green body with no markings other than a few diffuse white lines, and legs the same colour as the body. The head of the blacklegged leafroller caterpillar is also green but is marked with thin brown or black streaks, while its body is a translucent bright green with a dark stripe along the back and a pale yellow or pale green stripe along the sides, and its legs are blackened (Fig. 6). The caterpillar of the light brown apple moth has a fawn-coloured head streaked with brown, an opaque, olive or lighter green body with darker green stripes along the centre of the back and sides, and legs that are the same colour as its body (Fig. 7). As well as three pairs of thoracic legs the caterpillars all have four pairs of “prolegs” on the abdomen and another pair on the last body segment. The caterpillars wriggle rapidly if disturbed, and when dislodged from their protective webbing fall suspended on silken threads. Pupation takes place within the webbed foliage. 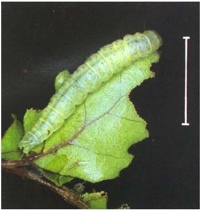 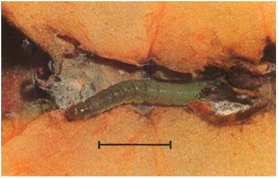 All three species have several generations a year and in summer the time from egg to adult is 4-6 weeks. In warm districts all stages of life may be present throughout the year, but where the climate is colder the insects overwinter as caterpillars. Winter survival of caterpillars feeding on pine buds and stems appears to depend on the degree of resin flow - if this becomes excessive the caterpillars can be smothered.

Control
Chemical control has not been contemplated in forests. In nurseries the use of a synthetic pyrethroid or other contact insecticide may be necessary. Lure and kill, and mating disruption methods have also been developed, using the pheromones of the various leafroller species to interfere with reproduction in the population. This has not been used commercially in forestry however.

Normally leafroller populations are presumably controlled by a complex of insect natural enemies. These include minute trichogrammatid wasps that parasitise eggs, and braconid, ichneumonid and eulophid wasps and tachinid flies that parasitise larvae or pupae. A commonly found parasitoid species is the Australian leafroller parasitoid Dolichogenidea tasmanica (Cameron). The predatory wasp Ancistroceros gazella paralyses leafroller larvae and stores them in its nest to provide food for its offspring.