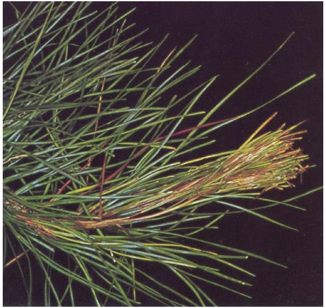 Fig. 1 - Needles of radiata pine chewed and webbed together
by brownheaded leafroller caterpillar.

Type of injury
Brownheaded leaf roller caterpillars feed singly on the leaves, stem and buds of the host plant whilst sheltering beneath a protective webbing of silk and foliage (Fig. 1). Major defoliation is rare, as high populations are not often sustained over a whole season. The apical buds on the leaders of young trees may be hollowed out and the stems chewed and this may cause loss in height, the production of multiple leaders and a kinked stem. Stem malformations often
disappear after a few years of growth. On older trees (of over 6 m in height) there is a tendency for the end buds of side branches to be attacked. The most serious damage occurs when persistent attack on the leader results in permanent stem malformation or prevents young trees overtopping surrounding vegetation.

Hosts
These caterpillars feed on a very wide range of hosts. Ctenopseustis species have been recorded from 48 genera of native plants in 36 families, including broadleaved and coniferous trees and ferns. Exotic hosts include Eucalyptus (eucalypts), Quercus (oaks), Acacia (wattles) and 13 genera of conifers including
Larix (larch), Picea (spruce), Pinus (pine), and Pseudotsuga (Douglas fir).

Distribution
These native insects occur throughout New Zealand from coastal to subalpine regions.

Economic importance
The brownheaded leafrollers maintain high natural populations within exotic forests where numerically they are a strong element in the defoliating caterpillar complex, along with the Australian light brown apple moth (Epiphyas postvittana (Walker)). Occasionally numbers increase and cause noticeable defoliation, but populations soon return to normal. Apical bud damage on young trees which causes malformation of leaders and stunted growth probably has more serious implications than the effects of defoliation. Larch, spruce, and Douglas fir are particularly susceptible to this form of bud damage. The leaders of radiata pine are usually malformed only when insect numbers are high or the plants are stressed by causes such as drought or competition with surrounding vegetation. Attack decreases as the tree's height increases and trees are usually safe three years after planting. The dominance of each of the species of Ctenopseustis seems to vary. For example, pheromone trapping in a pine plantation near Lincoln in mid Canterbury found that C. herana was dominant, whereas a similar study at
Eyrewell Forest in North Canterbury found C. obliquana was dominant (Brockerhoff et al 2002).

Description, life history, and habits
Adult brownheaded leafroller moths are about 12 mm in length with a wing span of up to 25 mm (Fig. 2). Males are usually smaller than the females. The front edge of the forewing is curved so that at rest the adults have the bell-shaped wing outline typical of tortricid moths (Fig. 3). 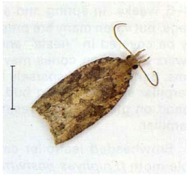 Coloration and markings on the forewing are extremely variable, ranging from fawn to chocolate brown with darker markings. On pale forms a short oblique brown band starting at the "shoulder" of the forewing is usually discernible. On other forms this band may be extended or may be part of an irregular dark brown pattern. The hindwings are lighter than the forewings and are fawn or grey, speckled with brown.

The female lays flat masses of 30 or more eggs on the leaves of the host plant, and each mass is covered with a translucent pale green waxy secretion. When fully grown the caterpillar, which by this time has usually shed its skin four times, is about 20 mm long and usually translucent green (Fig. 4), although pale yellow forms do occur. The head and the next segment are shiny dark brown. There are three pairs of thoracic legs and five pairs of "prolegs" on the abdomen. The caterpillar wriggles rapidly if disturbed, and when dislodged from its protective webbing falls suspended on a silken thread.

Pupation usually takes place within the webbing shelter with the full-grown caterpillar spinning a tight silken cocoon about itself. There are several generations a year and in summer the time from egg to adult is 4-6 weeks. In spring and summer the caterpillars usually feed on foliage, but when many are present the growing shoots of the host plant may be covered in "nests" and the stem and growing point chewed. Flowers and green cones may also be damaged. In winter, buds and stems, particularly of sparsely leaved or deciduous trees, are attacked. Caterpillar survival during bud and stem feeding on pines appears to depend on the degree of resin flow, for too much resin smothers the caterpillar.

Control
Chemical control has not been contemplated in forests. In nurseries the use of a synthetic pyrethroid or other contact insecticide may be necessary. Normally populations are presumably controlled by a complex of insect natural enemies, many of which also attack other native and exotic leafroller species. These include minute trichogrammatid wasps that parasitise eggs, and braconid, ichneumonid and eulophid wasps and tachinid flies that parasitise larvae or pupae. A commonly found parasitoid species is the Australian leafroller parasitoid Dolichogenidea tasmanica (Cameron). The predatory wasp Ancistroceros gazella (Panzer) paralyses leafroller larvae and stores them in its nest to provide food for its offspring.