Uraba lugens (gum leaf skeletoniser) (Nolidae) is an Australian moth that was first found in New Zealand in 1992 at Mount Maunganui. After several years it was eradicated from there but in 2001 it was found in Auckland. It is not known whether the Auckland population originated from the Mount Maunganui ones or represents a separate incursion from Australia. It has now spread throughout the greater Auckland region, with additional records in Waikato, Northland, and Bay of Plenty.

Modelling work carried out at Ensis predicts that Uraba has the potential to survive in all the commercial eucalypt growing regions of New Zealand and is thus a threat to the expanding eucalypt industry as well as to amenity trees.

Uraba lugens has been recorded from nearly 50 species of Eucalyptus in New Zealand and, as the common name implies, these are the main hosts. However, it has been recorded from other species as well. These include Agonis, Angophora, Lophostemon, Metrosideros, and Tristaniopsis . These are not so surprising because they all in the family Myrtaceae as is Eucalyptus . What is somewhat surprising are records from Betula, Fagus, Fraxinus, Liquidambar, Populus, and Quercus . Of particular note is the heavy damage sustained by Lophostemon and Betula . As these are widely planted amenity trees in Auckland ( Lophostemon is quite a common street tree) the damage is of some concern to arborists. 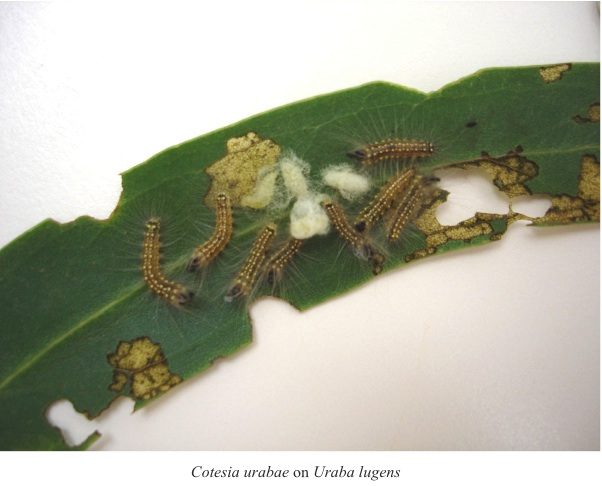 In 2004 Ensis gained approval to import four parasitoids of Uraba lugens into containment (FH News 143 August 2004), and work began to determine if any of these would be suitable biological control agents. (FH News 150 April 2005). Since then many problems have been encountered with mating and rearing the parasitoids, and with hyperparasitoid contamination of the parasitoid shipments from Australia. In addition, rearing U. lugens in the laboratory as hosts for the parasitoids has been difficult, with disease affecting the colony at various times. Two of the four potential parasitoids have been ruled out — one ( Euplectrus sp. (Eulophidae)) because a hyperparasitoid is present in New Zealand, and the other ( Eriborus sp. (Ichneumonidae)) because of difficulties obtaining enough from Australia. However, progress has been made with the remaining two species ( Cotesia urabae and Dolichogenidea eucalypti (Braconidae)) over the past two summers. Hyperparasitoid problems have been solved, and both species have now been reared through three generations in the laboratory. The methods for ensuring mating have been refined, and maintaining continuing cultures should not be a problem in the future. Host range testing of C. urabae is nearly complete for two non-target host species, the exotic pests Spodoptera litura and Heliothis armigera (Noctuidae). Further host range testing on native species will continue next summer, funding permitting. An application has been submitted to the Sustainable Farming Fund, in conjunction with the Gum Leaf Skeletoniser Stakeholders Group, which, if successful, will allow the project to be completed over the next 3 years.