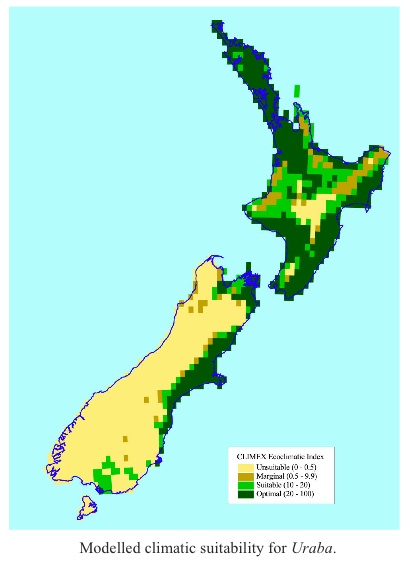 Since the establishment of the gum leaf skeletoniser (Uraba lugens) in Auckland, the Ministry of Agriculture and Forestry (MAF) has funded a substantial amount of research, undertaken by Forest Research and HortResearch, to determine how the pest can best be managed (Forest Health News 136: 1). Impact assessment studies have been carried out on 19 Eucalyptus and Corymbia species considered economically and culturally important to New Zealand. All of the commercial, shelter, and ornamental Eucalyptus species tested were susceptible to U. lugens larval attack to some degree, including a number of key commercial species ( E. nitens, E. regnans, and E. fastigata ). Field tests also found that pohutukawa (Metrosideros excelsa) was somewhat susceptible to attack, but only when plants were in close proximity to infested Australian hosts.

Climate modelling has determined that, subject to host availability, the potential distribution of U. lugens in New Zealand extends throughout most of the North Island, and in the South Island over much of the Canterbury Plains and Marlborough as well as portions of Southland, Otago, Nelson, and Tasman. This encompasses most of the eucalypt plantations in New Zealand. There is some uncertainty as to the effect of excessive rainfall and prolonged waterlogging on U. lugens , and more fieldwork is required to clarify this aspect of population spread. 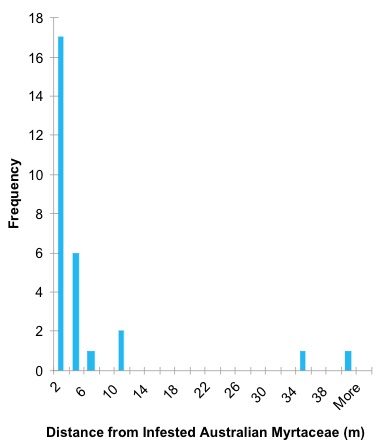 Frequency of attack on pohutukawa in Auckland as a function of distance from Australian myrtaceous hosts. Biological control has the potential to provide sustainable, long-term control of U. lugens populations if suitable agents can be identified and imported from Australia. Forest Research has lodged an application with the Environmental Risk Management Authority (ERMA) for approval to import four parasitoids from Australia into containment. If the application is approved, the earliest date that parasitoids could be imported into New Zealand containment is November 2004. Forest Research has also conducted efficacy trials on various insecticidal spray formulations. This information could be used to gain registration against U. lugens for the Btk (Bacillus thuringiensis var. kurstaki) and spinosad formulations tested. Combined with previous research on synthetic pyrethroids, this research provides a range of insecticide options suitable for control of U. lugens in urban areas and commercial forestry plantations.