In September 2004 Forest Research was granted approval by the Environmental Risk Management Authority (ERMA) to import four parasitoids of Uraba lugens from Australia into containment (FH News 143: 2). Several collections were made in Tasmania and South Australia from November 2004 to January 2005. Three of the four solitary parasitoids are now in containment at Forest Research: Cotesia urabae (Braconidae), Euplectrus sp. (Eulophidae), and Eriborus sp. (Ichneumonidae). All three species readily attack U. lugens in containment although breeding cultures are not yet fully established. A high level of hyperparasitism meant that the fourth species, Dolichogenidea eucalypti (Braconidae), did not survive. 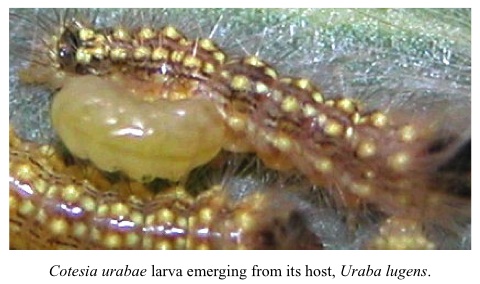 Cotesia urabae attacks first to sixth instar U. lugens larvae and the parasitoid larva emerges before the host caterpillar reaches pupation (see Figure). This species has two generations for every U. lugens generation in Australia. Euplectrus sp. is the smallest of the four species (< 3 mm) and attacks only first instar larvae. This parasitoid develops externally, hidden beneath its host. Although small, the adults can live for up to 120 days. The last species to be imported, Eriborus sp. is also the largest, at approximately 12 mm. Females are thought to attack medium to large larvae; however, the preferred age-size range is not known. The adult wasp emerges after the host has spun its cocoon.

Host specificity tests have begun with C. urabae and Eriborus sp. against the following non-target moth species: Celama parvitis, Metacrias erichrysa, Nyctemera annulata , and Helicoverpa armigera . These species have been chosen because they are related to Uraba sp. Preliminary results show no evidence for attack on these non-target species; however, the testing programme is at a very early stage.