Forest and Timber Insects in New Zealand No. 38: A native wood-boring weevil. 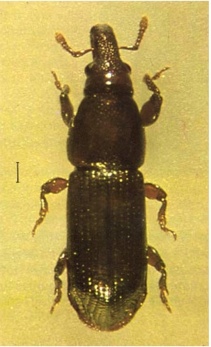 Type of injury
The larvae of the weevil Torostoma apicale feed in both sapwood and heartwood of building timbers which have long been seasoned, and sometimes damage sawn timber during seasoning.

In the forest they occur in logs, in the dead wood of standing stems, and in dead branches and twigs of living trees. Larval tunnels are mostly parallel with the grain of the wood and are loosely packed with fine faecal pellets. Ultimately the tunnels may reduce the wood to a series of lamellae. The exit holes are smaller than those of the house borer Anobium punctatum, usually more or less circular, but sometimes slotted at opposite sides or otherwise irregular in outline (Fig. 2). 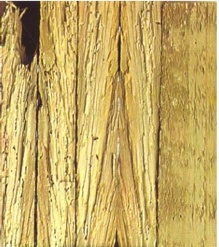 Distribution
This native weevil is believed to be distributed throughout New Zealand, but it may be more common in those parts which have a humid summer climate.

Economic importance
Though it may locally contribute to damage in building timbers which have not been treated with preservatives, it is found much less frequently than the house borers Anobium punctatum and Leanobium flavomaculatum (Anobiidae), or the two-toothed longhorn Ambeodontus tristis (Cerambycidae). Damage is probably rarer and less important than that of the New Zealand drywood termite Kalotermes brouni (Kalotermitidae) or the large borer beetle Hadrobregmus magnus (Anobiidae). Damage in seasoning radiata pine is usually found in association with sapstain fungi, but it is not known whether T. apicale disseminates sapstain, or whether it prefers sapstained parts.

Description, life history, and habits
The adult (Fig. 1) is dark brown, up to 6 mm long, and 1.5 mm wide. The head extends in line with the body, and is drawn out in front of the eyes to form a snout which bears a pair of elbowed antennae attached near its mid-point. Each antenna consists of a stout, elongate first segment followed by a series of five short ones lying more or less at right angles, and ends in an oval club which is paler than the rest.

The prothorax is as wide as the elytra (wing cases), but narrows towards the front to the same width as the head. Both the head and the prothorax are densely and irregularly pitted.

The elytra are constricted at their front edges, forming a distinct waist which is accentuated by the rounded rear corners of the prothorax. The surface of the elytra is longitudinally ribbed, with rows of pits between the ribs. The rear edge of each elytron is expanded, forming a horizontal shelf from the middle to the outer corner. The extent of this flanging helps to distinguish T. apicale from other native members of the weevil subfamily Cossoninae.

The larva is a pale, curved, legless grub, not readily distinguished from those of other small weevils.

On building timber, T. apicale lays eggs on rough-sawn surfaces or in holes from which previous generations have emerged.

The life history of this insect has not been studied, but a similar cossonine weevil has been found to pass through five larval stages in 6–8 months when reared at 25°C and 95–100% relative humidity in the laboratory (Hammad, 1955), and Kelsey (1946) considered it probable that the life cycle of T. apicale under natural conditions is completed in a year.

In New Zealand the Cossoninae are represented by an unusually large number of species; 132 species placed in over 30 genera have been described. Most occur in wet decaying wood, or under bark, and only T apicale is found to damage buildings. In the United Kingdom, however, two New Zealand species, Euophryum confine and E. rufum, which have been accidentally introduced are now widely distributed and are of some economic importance because of their damage to building timbers, especially in cellars and other damp, poorly ventilated situations.

Control
Measures specifically for the control of T. apicale damage in buildings or in timber seasoning yards have not been required. Prevention of damage by this and other wood borers is most satisfactorily obtained by the consistent use of preservative-treated timbers in new buildings. No parasites or predators of T. apicale have been recorded.