Forest and Timber Insects in New Zealand No. 20: Sirex woodwasp. 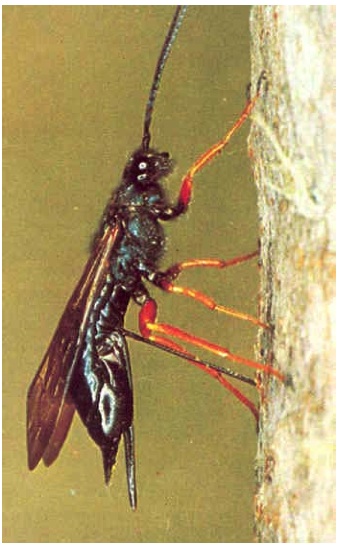 Damage type
The woodwasp, Sirex noctilio (Fig. 1) lays eggs in living trees and at the same time deposits mucus and fungus into the wood. The mucus causes the foliage to wilt and makes conditions in the tree suitable for the spread of the fungus. Susceptible trees may die. The larvae tunnel through the fungus-infected wood, and the adults make round exit holes when emerging. Resin may ooze from egg-laying (oviposition) holes drilled by sirex. Even if the attack is unsuccessful, degrade of the timber may occur because of resin accumulation or killed zones in the wood.

Trees most susceptible are those which have been weakened by environmental factors such as drought or overcrowding. Healthy dominant trees may also succumb if oviposition is heavy. They can be so weakened that their vigour is reduced sufficiently for them to be attractive for oviposition by other sirex females. Sometimes only one sector of the trunk is affected and this may result in a strip of dead wood in an otherwise healthy tree. If a tree is large it may be slow to die. In the summer after the initial attack, sirex will emerge from the dead top and fresh oviposition may occur in the living wood lower down the trunk. In this way attack on one tree can be spread over two or more years. Sirex may kill trees which have been accidentally damaged by forestry operations, by wind, hail, lightning, or fire. The fungus, Sphaeropsis sapinea, which can enter through pruning wounds, may weaken a tree sufficiently for it to become susceptible to sirex. Pruning in summer can result in losses owing to sirex being attracted to the trees. Thinning to waste may cause an increase in sirex numbers if conditions are suitable for breeding in the felled trees. There is no way of predicting which trees may succumb to attack after pruning or thinning.

Not all attacks are successful. A healthy, vigorously growing tree may resist by flooding the oviposition holes with resin, or by producing substances (polyphenols) within the stem which prevent the growth of the fungus. Trees also vary in their genetic constitution and some individuals seem to have a "built-in" resistance to the effects of the mucus.

Resin blobs or streaks on the trunks of living trees (Fig. 2) can be an indication of sirex oviposition. Although these can result from other causes, there will be no mistake in identification if the bark under a resin blob is pared away with a knife. If sirex attack has occurred, the cambium below shows an oval dark stain with an oviposition hole or holes at its centre. A successfully attacked tree can be recognised by the wilting of the young needles and the yellowing of old needles. Later the foliage turns red and eventually falls off. Mortality in a stand is often most evident in September or October, at the start of spring growth. Trees killed in previous years will show circular emergence holes varying from 3 to 6.6 mm in diameter (Fig. 3). 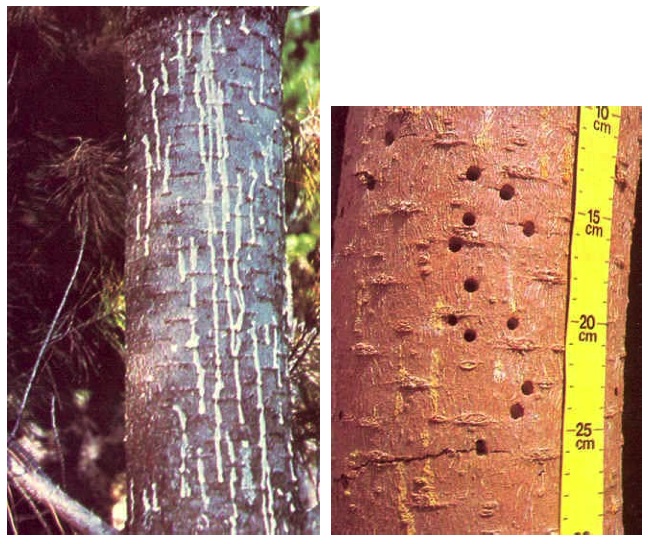 Fig. 2 -  Resin bleeding from drill holes made in a living radiata pine tree by sirex females.
Fig. 3 -  Holes made by sirex adults when emerging from pine trees.

Hosts
Pinus radiata (radiata pine) and other introduced pines are hosts to this insect, also occasionally Larix (larch) and Picea (spruce) if the trees are already moribund.

Distribution
This European woodwasp is well-established throughout New Zealand. It is also present in Australia, Argentina, Brazil, Chile, Uruguay, South Africa and eastern Canada and the USA.

Economic importance
Usually the economic loss in any year is not great, but where conditions are suitable considerable mortality may occur within a particular forest area. Damage is mainly confined to unthrifty over-crowded stands and is usually negligible in well-managed plantings.

Description
The adult has four membranous wings and a stout cylindrical body which is pointed at the rear end. The size of the insect is very variable, with body length (measured from the front of the head to the tip of the abdomen) ranging from 9 to 36 mm. The female (Fig. 1 and 4) is a steel-blue colour except for the legs which are reddish-brown. Pointing backwards from the underside of the abdomen is a spike-like projection which protects the ovipositor (egg-laying drill) when it is not being used. In the male (Fig. 4) the middle segments of the abdomen are orange-yellow and the hind legs are thickened and almost wholly black.

The larva is a cylindrical yellowish-white grub, with a round head, rudimentary legs, and a hard black tail spine (Fig. 5).

Inside the adult female there are glands which produce mucus, the special organs which carry a fungus (Amylostereum areolatum (Fries) Boidin). Excretion from the glands and pieces of the fungus (arthrospores) pass down the ovipositor when it is being drilled into the wood for egg-laying. The female larva carries the fungus in pockets situated one on each side of the body in the fold between the first and second abdominal segments. Female larvae can be recognised by the presence of these “hypopleural” organs but, as they are difficult to see, it is easier to sex larvae by examining the underside of the ninth abdominal segment. The male has three small hardened brown zones (sclerites) but only two are present in the female (Fig. 6). 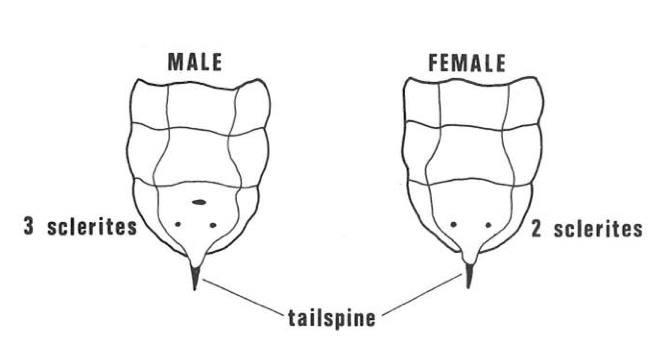 Fig. 6- Underside of last abdominal segments of sirex larva. The male has three small brown hardened zones (sclerites) while the female has only two.

Life history and habits
Adults emerge from the wood from early December to the end of April, with the largest number appearing between mid-January and mid-March. If many are present and the weather is warm and sunny, males can be seen swarming around the tree tops. Males usually start to emerge a few days before the females, and the ratio of males to females may be as great as 20:1. The sex of the progeny is determined by the fertilisation of the eggs. Although a virgin female lays eggs satisfactorily these give rise to only male progeny. A mated female can produce either male or female offspring.

The emerging adults have fully-developed reproductive systems and females may start ovipositing within a day of coming out of the wood. Adults do not feed but live on fat stored inside their bodies. At normal temperatures they live for a maximum of 12 days, but an actively ovipositing female may live for only 3 or 4 days and most of the eggs she carries can be deposited in that time. The number of eggs varies according to the size of the female; a small specimen may have less than 50 but the largest females contain about 500. Adults are strong fliers and dispersal may occur over a distance of several kilometres.

The female is attracted to weak or dying trees by volatile substances produced in the trees stems. Once on such a tree, she drills in with her ovipositor to assess the tree's suitability for egg-laying. If unsuitable she will withdraw and may then fly away or walk further up the stem to drill again. If the condition of the tree is satisfactory an egg is laid, the ovipositor is withdrawn, and then a second hole is drilled into the wood using the same hole through the bark (Fig. 7). Sometimes as many as five drill holes may be made, fanning out from one place in the bark. Most of the holes in a group contain eggs but usually the last hole is eggless and packed with fungus arthrospores. The mucus injected during drilling causes wilting and yellowing of foliage and makes conditions in the stem suitable for the spread of the fungus. The growing fungus dries out the wood and disrupts the movement of water within the trunk. The combined effect of mucus and fungus can kill the tree. 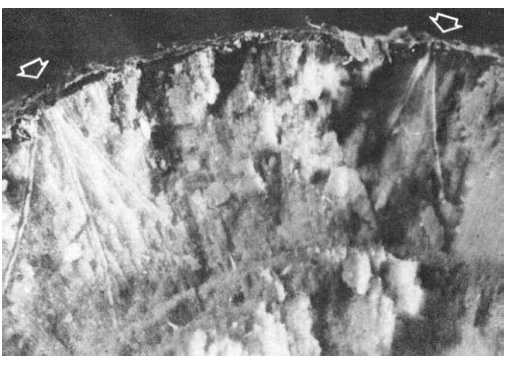 The eggs hatch after a minimum time of nine days, but some remain dormant for several months. The larvae hatch from the eggs, tunnel through the wood invaded by the fungus, and apparently gain all their nourishment from the fungus. The larval tunnel is circular in cross section and tightly packed with wood chewings (Fig. 8 and 9). Its length can vary from 50 to 200 mm. Length of tunnel and size of larvae are affected by the moisture content of the wood. If the wood dries out too rapidly, then tunnels will be short and larvae will remain small. Unlike many insects the number of larval moults is not constant and even a small larva can pupate and become an adult. Pupation, which usually lasts between 16 and 21 days, is preceded by a prepupal stage lasting three to five days. Before the females emerge, the fungus from the cast larval skin passes up the ovipositor and into the body of the adult. The life cycle of sirex is usually completed in 10 to 13 months, but a few larvae may remain for two years in the wood. 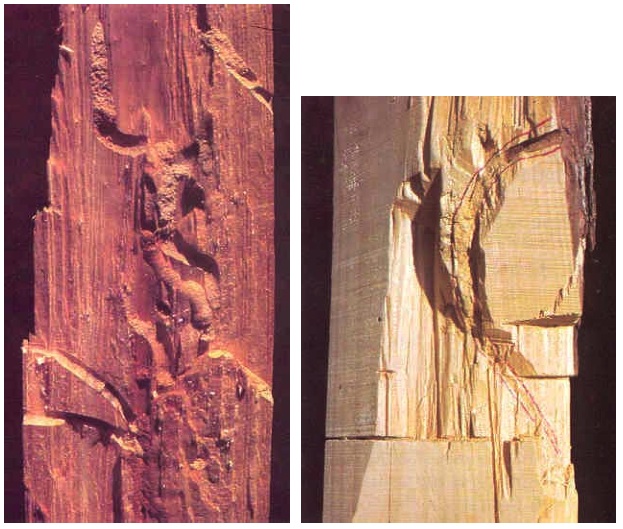 Control
Control is achieved by a combination of good forest management and the presence of natural enemies. As suppressed and malformed trees are the most susceptible, there should be appropriately-timed thinnings to reduce competition between trees and encourage vigorous growth. Trees damaged by natural causes should be salvaged as soon as possible. To avoid unnecessary mortality after silvicultural operations the following points should be borne in mind: during felling and extraction avoid damaging the remaining trees; if thinning to waste is practised close to the sirex flight season and the wood does not dry out quickly, then sirex may oviposit and breed in the felled trees, which can result in increased numbers of sirex being present the following year and a possible heavy attack on the standing trees; since pruning temporarily weakens a tree, it is advisable not to remove too much of the green crown at any one time; pruning, especially high pruning, should be avoided in summer in any forest where sirex numbers are high.

Control by insecticides is not available. Apart from the disruptive effect these might have on natural enemies, the long period during which adult sirex are present in the forest and the fact that an excessive amount of insecticide is needed to kill each individual prohibit their use from a practical point of view. The larvae in the wood are not affected by sprays.