Forest and Timber Insects in New Zealand No. 48: Nematode Parasite of Sirex 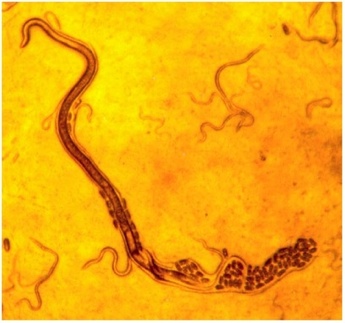 Type of injury
As described in Leaflet No. 20, the sirex woodwasp Sirex noctilio Fabricius, a European insect accidentally introduced into New Zealand before 1900, inserts eggs, mucus, and fungus into the wood of living pine trees and occasionally into larch and spruce. The combined effect of the mucus and fungus may kill susceptible trees. The sirex larvae tunnel for 1 or 2 years in the fungus-affected wood, pupate, and emerge during the summer as winged adults. A nematode worm Deladenus siricidicola Bedding is a parasite of the sirex woodwasp. The infective form of this nematode invade sirex larvae. When an infected female larva pupates, offspring of the nematodes migrate to her ovaries and can penetrate her eggs so that she develops into a sterile adult. A free-living form of the nematode lives in wood already affected by sirex. It feeds on the sirex fungus (Amylostereum areolatum (Fries) Boiden) but causes no further damage to the wood.

Insect parasites of sirex are not affected by this nematode.

Hosts
In nature the nematode exists only inside sirex, or in wood containing actively growing sirex fungus. In the laboratory it is possible to maintain cultures of the nematode on sirex fungus growing on synthetic media.

Distribution
This nematode, first discovered in New Zealand in 1962, was later found to be present in Europe, and must have come from there in sirex-infested timber. There are several strains of the nematode in Europe, two of which are established in New Zealand: one, which sterilises female sirex, occurs throughout the North Island wherever sirex is present; the other, which does not sterilise its female sirex host, is found in the north of the North Island. Originally the nematode was not present in the South Island, and so the sterilising strain has been deliberately spread into forests there.

The sterilising strain of nematode relies for survival on the fact that if a tree is attractive to sirex many females will oviposit in it. At least some of these females are likely to be free of nematodes so the larvae which develop from their eggs will therefore be available for nematodes to parasitise. If the sirex population is low, the non-sterilising strain seem more suited for survival since they do not affect the eggs of their host.

Economic importance
The sterilising strain of the nematode is probably the most important of the natural enemies of sirex in New Zealand. On many occasions over 90% of female sirex emerging from sample logs taken from forests have been found to be sterile. The non-sterilising strain has no effect on sirex populations.

Description, life history, and habits
Nematodes are small unsegmented worms commonly called roundworms or threadworms. Both the sterilising and non-sterilising strains of D. siricidicola have two distinct forms: one parasitic inside the insect, the other free- living in the wood. The life history of the sterilising strain of nematode is described in the following account. A parasitised sirex larva may contain up to 100 female nematodes between 5 and 25 mm long, many of which are bright green. When the sirex larva pupates, the nematodes start to produce young which migrate to the developing testes or ovaries of the pupa. When the parasitised male adult sirex emerges from the wood it may contain many thousands of juvenile nematodes in its testes. The reproductive ability of the male is not impaired since sperms will have already passed into the seminal vesicles before the testes are invaded by the nematodes. The nematodes cannot pass along the fine seminal ducts, and are not transferred to female sirex during copulation. The testes do, however, retain the highly swollen form normally found only in the early pupal stage (Fig. 2). 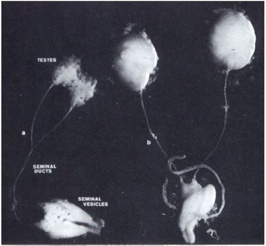 Fig. 2 - Reproductive organs of male sirex:
a) From a nematode-free adult. Testes normal.
b) From an adult affected by nematodes. Testes greatly swollen and containing many thousand juvenile nematodes.
An adult female nematode is looped around the seminal vesicles.  (x8.5)

Parasitism in the female pupa causes a reduction in ovary size, and between 50 and 200 juvenile nematodes penetrate each egg (Fig. 3 and 4). The resulting adult female is sterile. When a parasitised female lays eggs in the wood, the nematodes escape from the eggs and feed on the developing fungus also inserted into the tree by the female sirex. The juvenile nematodes take about 14 days to develop into fungus-feeding adult males and females and then mate. Females may live for several weeks and produce over 1000 eggs each (Fig. 1). The time taken for eggs to hatch varies but averages 4-5 days. The offspring continue the cycle by feeding on the fungus and spreading throughout the fungus-affected portion of the tree. This fungus-feeding cycle can be repeated for as long as the sirex fungus survives in the wood. 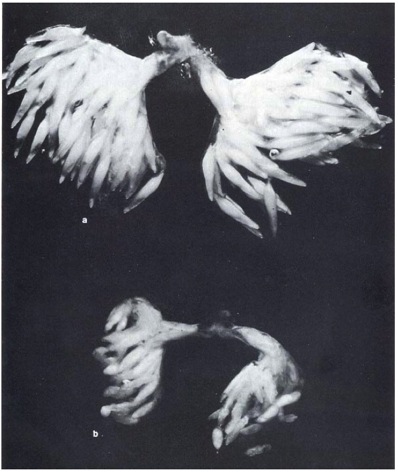 Fig. 3 - Ovaries of sirex: a) From a nematode-free female. Eggs healthy. b) From a female affected by the sterilising strain of the nematode. Ovaries shrunken; each egg will contain 50-200 juvenile nematodes. (x9) 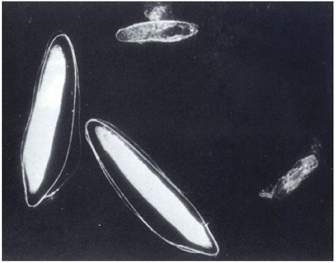 When juvenile nematodes come close to a sirex larva some may develop into infective females. After mating, these females penetrate the skin of the larva, their points of entry being marked by small dark-brown scars (Fig. 5).

Fig. 5 - The brown spots on this sirex larva are scarred-over wounds made by nematodes when penetrating the skin. (x3)

The free-living and parasitic life cycles of the non-sterilising strain are similar to those described for the sterilising strain, except that juvenile nematodes have no effect on the eggs of their host and are probably produced inside the sirex pupa after the eggs are fully formed and can no longer be penetrated. These juvenile nematodes are packed between the eggs and the ovary wall (Fig. 6) and deposited in the wood when the unaffected sirex eggs are laid. 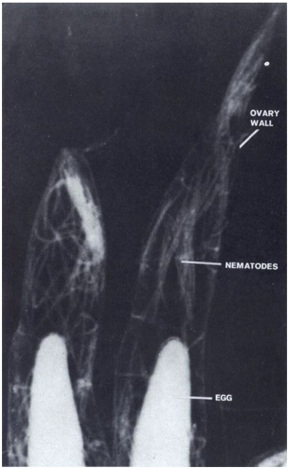 Fig. 6 - Tips of part of a sirex ovary containing juvenile nematodes of the non-sterilising strain.
Nematodes are present between the healthy eggs and the ovary walls. (x55) 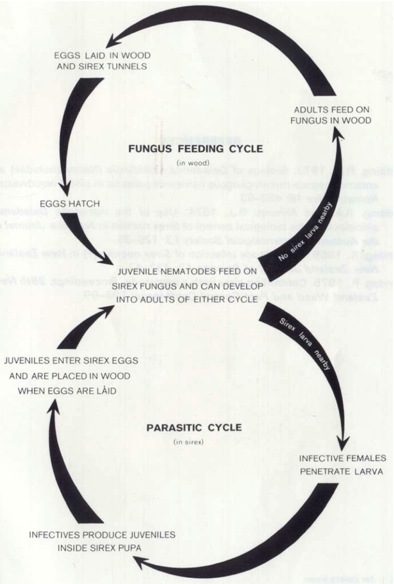