During the summer of 2001-2002, eucalypt growers experienced an outbreak of the eucalyptus tortoise beetle (Paropsis charybdis) worse than has been seen for many years. The unseasonably wet weather may have been a factor, but growers were concerned that the arrival of a tiny wasp from Australia may have compromised the effectiveness of Enoggera nassaui , deliberately introduced in the late 1980s and again in 2000 to control Paropsis populations by parasitising its eggs. Baeoanusia albifunicle , an obligate hyperparasitoid (A parasitoid of a parasitoid) of Enoggera nassaui, was first detected here in 2001 (FHNews 117:1). 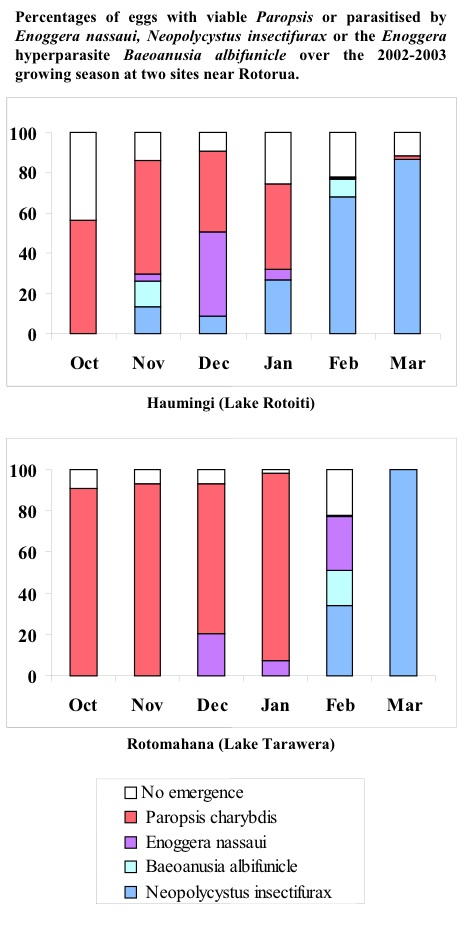 More information was urgently needed, so Forest Research entomologists undertook monitoring studies in Eucalyptus nitens plantations in the central North Island between September 2002 and April 2003. In the first few months E. nassaui successfully parasitised up to 50% of P. charybdis eggs. However, B. albifunicle was already present in samples in December, and by late summer E. nassaui was hyperparasitised and rendered inoperative in an average of 60% of parasitised eggs. This resulted in a drop in the effective parasitism of Paropsis eggs to about 10% on average, and the percentage of viable Paropsis eggs correspondingly ranged from 2% to as much as 53%. These observations have confirmed that by reducing the Enoggera populations, B. albifunicle has the potential to check its efficacy as a biological control agent of P. charybdis , especially late in the season when historically it was once responsible for up to 90% parasitism of second generation eggs.