Two new egg parasitoids associated with the eucalyptus tortoise beetle, Paropsis charybdis, have been discovered in New Zealand. This insect causes substantial damage to a number of eucalypt species by browsing on their foliage. The new insects are expected to influence significantly the current programme that uses the introduced parasitoid Enoggera nassaui as a biological agent to control this undesirable eucalypt pest (FHNews 100:2). 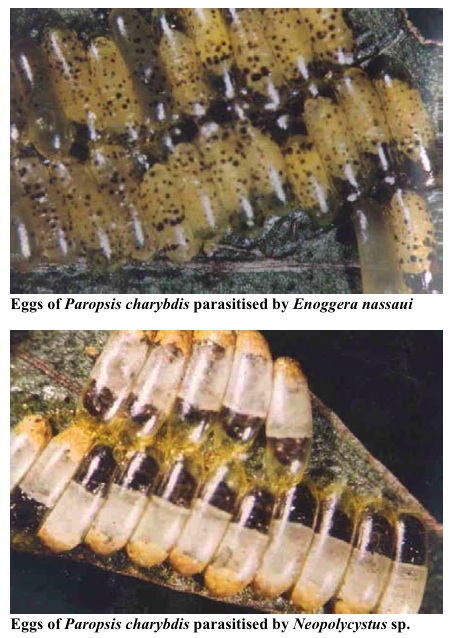 Because of its behaviour, there is a risk that B. albifunicle may check the population development of E. nassaui and prevent it from multiplying as rapidly as it has in past seasons. This is likely to have serious consequences, since until now E. nassaui has been the only biological control agent effective against P. charybdis in this country.

That was until the discovery of the second insect, also a tiny wasp. Identified* as Neopolycystus sp., this species, like E.  nassaui, is a primary parasitoid of eucalypt leaf beetles such as Paropsis in Australia. Another species of Neopolycystus , N. insectifurax , was originally also released in New Zealand as a potential control agent, but unlike E. nassaui it failed to become established. It appears that the new species is not N. insectifurax, but another recent introduction. The identity of the insect parasitising the eggs of P. charybdis can be diagnosed from their external appearance. Eggs invaded by E. nassaui become covered in a characteristic pattern of small black dots, while those parasitised by the new Neopolycystus species acquire a
distinctive three-band pattern. One end contains an orange-brown plug, the central area has bands of white, and the opposite end appears black.

The future of E. nassaui as an effective biological control agent of P. charybdis is now in doubt. However, there is hope that the new species of Neopolycystus may instead assume some of its regulatory role. Certain species of Neopolycystus are believed to be immune to attack by B. albifunicle . If this is also true of the new species, it will be free to assist in controlling the tortoise beetle and many other paropsines that may enter this country in the future.

Both new species have so far been found only in the central North Island, but any tree growers with eucalypt species susceptible to P. charybdis should be vigilant for evidence of excessive defoliation in future seasons.