Current status of Paropsis charybdis in the Central North Island

Enoggera nassaui is an egg parasitoid introduced into New Zealand in the late 1980s and again in 2000 for the biological control of the eucalyptus tortoise beetle Paropsis charybdis. In 2001 an obligate hyperparasitoid of E. nassaui , Baeoanusia albifunicle , was detected in New Zealand.  That same year, another egg parasitoid of P. charybdis was recorded in New Zealand, thewasp Neopolycystus insectifurax . Attack rates of the two egg parasitoids and the hyperparasitoid have been monitored since the summer of 2001–02. Each summer P. charybdis egg batches have been collected from several Eucalyptus nitens plantations in the Bay of Plenty/Taupo region (see FH News 130:1 & 141:1).

For the 2004–05 summer, three plantations were monitored (Lake Rotoiti, Atiamuri, and Waikite Valley, Figure 1). Parasitism by E.nassaui increased from November to January then declined in February at all three sites. At Lake Rotoiti and Waikite Valley the hyperparasitoid followed a similar trend in abundance to E. nassaui but N. insectifurax was not collected until January, when it too began to increase in abundance. Neither B. albifunicle nor N.insectifurax have been recorded from Atiamuri. These trends are generally similar to those observed in previous summers, although B. albifunicle was recorded earlier in the summer at Lake Rotoiti than previously. 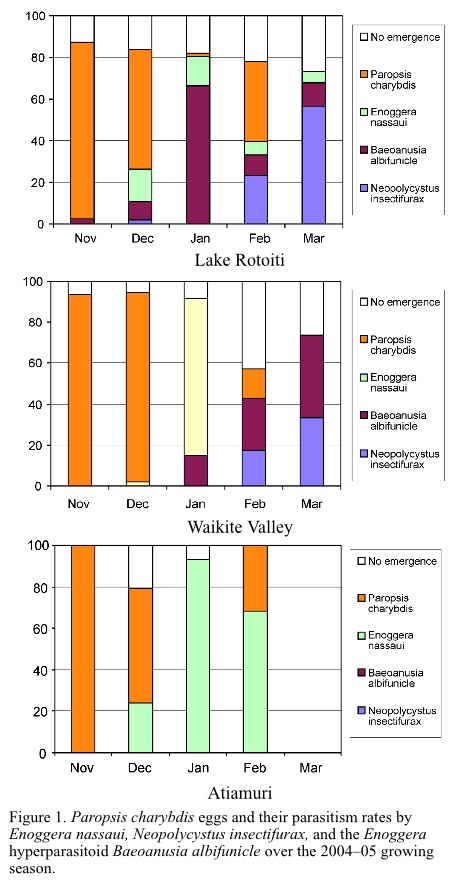