Forest and Timber Insects in New Zealand No. 36: A native house borer. 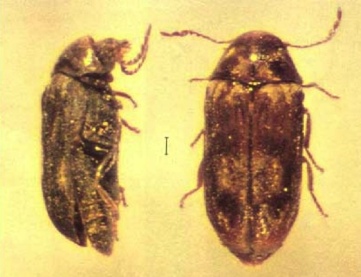 Fig. 1 - Leanobium flavomaculatum adult, side view and top view. Note the pale spot across the centre of the wing covers, and how the prothorax forms a hood over the head.
The line shows natural length.

Type of injury
Larvae of the beetle Leanobium flavomaculatum feed in building timbers, in dry wood of dead standing stems, and in dead branches and twigs of living trees. Damage to building timbers looks very much like that caused by the house borer, Anobium punctatum, and is often attributed to that species. Flight holes are circular, about 1.5-2.5 mm in diameter (Fig. 2).

Distribution
This native insect seems to be especially common in the drier eastern parts of both the North Island and the South Island, but may well be more widely distributed.

Economic importance
Damage by this insect has not usually been separated from that of Anobium punctatum in surveys of borer damage to buildings. However, at least in some parts of Canterbury it appears to be the commonest anobiid borer in older houses.

Description
Adults (Fig. 1) are 2.5-4.5 mm long, and about half as wide. The head is concealed from above by the hood-like prothorax. The principal colour is dark brown to black, with patches of light red. The dark areas are clothed with a down of black hairs, the reddish ones with pale hairs. The largest pale marking is hexagonal and occupies the middle of the elytra (wing cases). This pattern distinguishes L. flavomaculatum from all other anobiid beetles occurring in New Zealand. Smaller pale spots are present on the shoulders of the elytra and towards their rear.

Viewed from above, the rear of the prothorax is as wide as the elytra, narrowing to the front which is rounded. The elytra are parallel- sided, longitudinally ribbed, and rounded behind. Seen from the side, the body is as deep as it is wide; the sides of the pronotum (the upper surface of the prothorax) project downwards, covering the head behind the eyes; the side margins of the elytra are wavy. The antennae consist of 11 segments of which the end three are slightly flattened and the others, except for the two nearest the head, are sharply triangular.

The larva (Fig. 3) is a white curved grub, stoutest at the thorax, with clearly visible legs; it has narrow bands of small spines across the back of eight of the body segments and a patch of small spines on either side, at the end of the abdomen. There are swellings across the back of each segment and smaller lobes at the sides. The head is white with the exception of the red-brown mouth frame and the black jaws. In size and general appearance it is much like the larva of A. punctatum, but the latter has no patches of spines at the end of the abdomen. 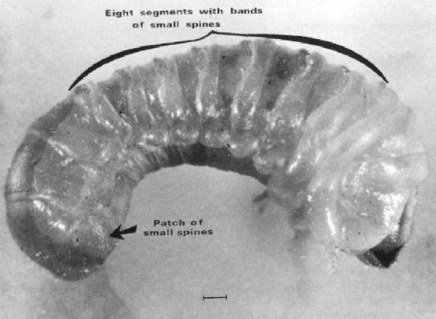 Life history and habits
The time needed for development of L. flavomaculatum has not been studied. From what is known about other wood-boring beetles, it will probably vary, depending on the nutritive properties of the wood, the temperature, and wood moisture. In one instance, the first adults appeared from red beech billets four years after eggs were laid.

Emergences have been recorded from late November to January, with a peak in December. No beetles emerge during the morning, but they frequently appear from about 2 p.m. Soon after emerging, the female stands near the exit hole with the tip of her abdomen raised, and if a male is attracted mating occurs.

Groups of eggs are laid in crevices in wood or bark, or on rough- sawn ends of billets, especially in the region of the cambium when bark is firmly attached. In the latter instance the larvae make long straight mines engraving both bark and sapwood (Fig. 4 and 5). These mines gradually increase in diameter and may be more than 220 mm long. Subcortical mines of this sort have been seen in red beech, putaputaweta, Douglas fir, and macrocarpa. 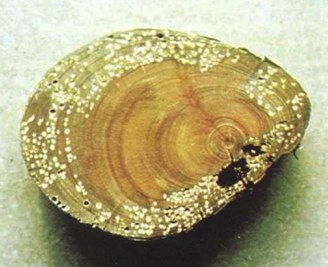 Fig. 5 - Workings of L. flavomaculatum in macrocarpa sapwood. This is a cross-section through
the branch shown in Fig. 4.

Though larvae may feed just beneath the bark when host material is first infested, workings have been found in the heartwood of macrocarpa felled only six years previously. When rimu weatherboards are infested, flight holes frequently appear across the entire width of the board (Fig. 6), whereas if damage were restricted to sapwood one would find a concentration of holes towards the edges of the boards which are sawn radially. When exterior building timbers are reinfested year after year eggs must be laid in the exit holes, since these are the only obvious crevices on painted surfaces. Although more common on the shaded sides of buildings, severe L. flavomaculatum damage may appear on sunny aspects, where A. punctatum damage is rarely found. 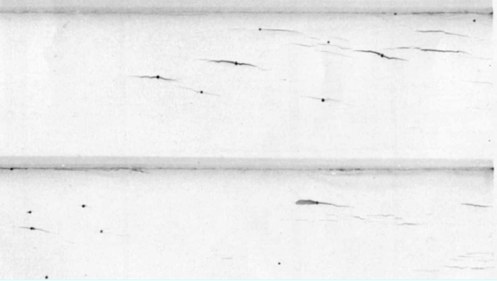 Fig. 6 - Rimu weatherboards with exit holes of L. flavomaculatum across the whole surface, including areas where heartwood is probably present. Note the lifting of paint where water has entered the holes.

Control
As far as is known, chemical control methods used against A. punctatum (see Leaflet No. 32) are likely to be just as effective against infestations of L. flavomaculatum. Prevention of anobiid damage by the consistent use of preservative-treated timber in new buildings is the most satisfactory solution.

A braconid wasp (a species of Doryctes) parasitises L. flavomaculatum, and the predatory beetle Chaetosomodes balli (Broun) (Chaetosomatidae) has been reared from infested samples. The small pteromalid wasp Theocolax formiciformis (Westwood), a parasite of A. punctatum, has not yet been found parasitising L. flavomaculatum though it has sometimes been found in the workings of A. punctatum in the immediate vicinity. Since L. flavomaculatum is of economic significance only when it damages building timbers, biological control agents are of no practical value.