Forest and Timber Insects in New Zealand No. 15: Blue-gum Chalcid. 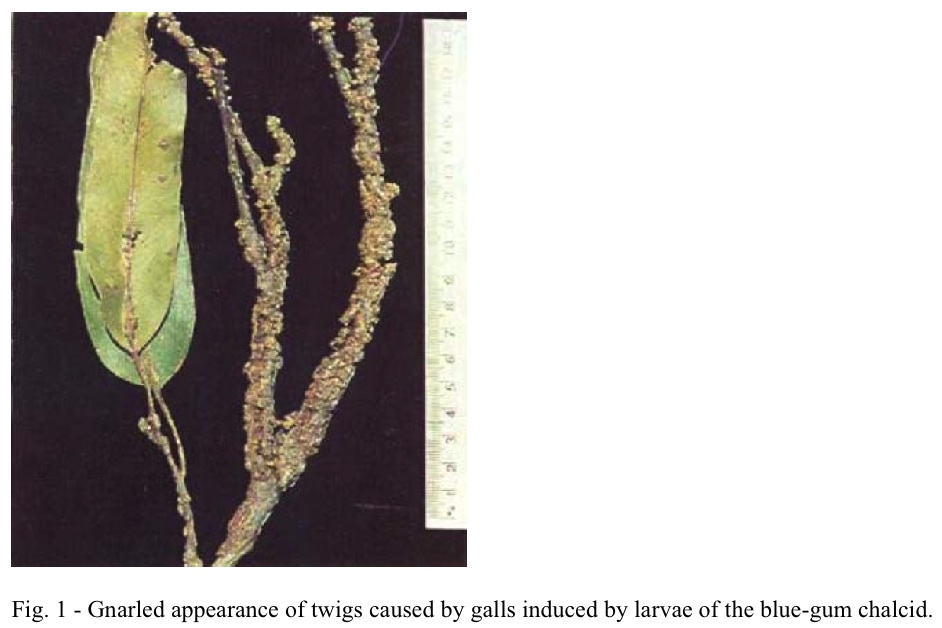 Type of injury
The larvae of the blue-gum chalcid induce galls to form on twigs and leaves of the host (Fig. 1 and 2).

Hosts
Eucalyptus globulus and other species of similar succulent growth are hosts to this chalcid.

Distribution
This Australian insect occurs throughout New Zealand wherever the hosts are found.

Economic importance
The blue-gum chalcid is one of the most important pests on E. globulus in New Zealand. Repeated attack can lead to loss of foliage from terminal branches and even large limbs, and
possibly to the death of the tree.

Description, life history, and habits
The adult is a very small (1.0-1.5 mm long) black wasp. The larva is a minute, white, legless grub found within the galls on the host plant. There is generally believed to be one generation per year, with adults being found from December to February. However, Clark (1938) records two emergence periods, viz. December-January and June-July. Oviposition occurs soon after emergence. The eggs are laid singly in the young bark of the twigs, in the midribs of the leaves, or in the actual leaf blades. When the eggs are laid in the twigs or in the midribs of the leaves the developing larvae induce coalescing swellings, or galls, to form on the host plant tissue. After repeated attacks the young growth has a gnarled appearance. These galls can cause the twigs to split, destroying the cambium. When the eggs are laid in the leaf tissue, the resulting "pimple" galls are well separated from each other. The adults that emerge from the pimple galls are always much smaller than those that emerge from the twig galls. 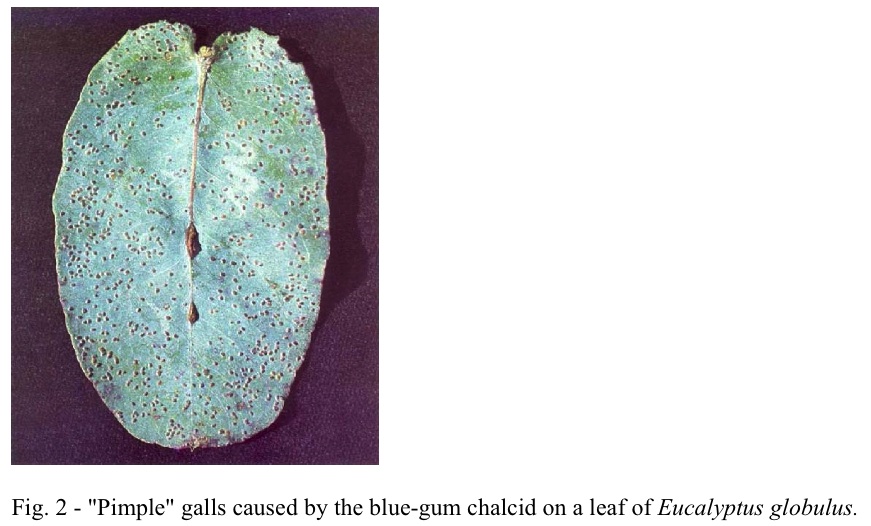 The larvae pupate within the galls and the adults emerge through a tiny hole that they cut to the surface.

Control -
Control of this insect has not been attempted in New Zealand but should be feasible (if justified economically) with a systemic insecticide.