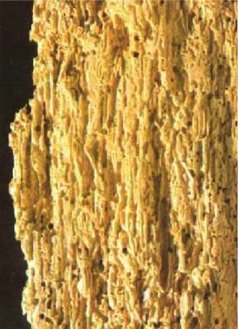 Type of injury
The house borer is capable of causing severe damage to untreated dry timbers used in buildings and furniture. The larvae prefer to feed on the sapwood although some instances of damage to heartwood have been recorded. In the forest the insect breeds in dead parts of trees and in logs.

The initially distinct network of larval tunnels within the wood coalesces as the infestation progresses, and the wood structure is eventually destroyed (Fig. 1). The loosely packed bore dust has a gritty feel when rubbed between the fingers. It may be seen dribbling from the small (1-2 mm in diameter) round exit holes, having been dislodged by the emerging beetles, by parasites of the insect, or by simple vibration.

Distribution
This insect is found throughout temperate regions of the world, including New Zealand.

Economic importance
This borer is responsible for most of the insect damage found in structural and decorative timber in New Zealand. Infestations may occur in untreated timber used for almost any purpose including structural timbers, exterior cladding, joinery, furniture, and flooring. In mild infestations damage is superficial and is important only where finished surfaces are marred by the appearance of exit holes. However, repeated reinfestation may result in the complete failure of the attacked timbers.

Description, life history, and habits
The beetles are 2.5 to 5 mm long and reddish to blackish brown. The body is basically cylindrical, the prothorax forming a deep hood which completely covers the head from above (Fig. 2). The slender antennae are about one-third as long as the body and the three terminal segments are slightly flattened. The upper surfaces of the body are clothed in short, fine, yellow hairs which on the elytra (wing cases) are between rows of well-defined punctures. Females are usually larger than males. 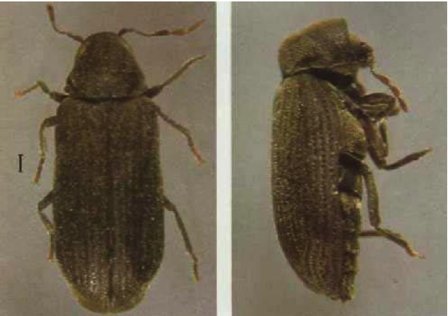 Fig. 2 - House borer adult, top view and side view. Note how the prothorax forms a hood over
the head. The line shows natural length. 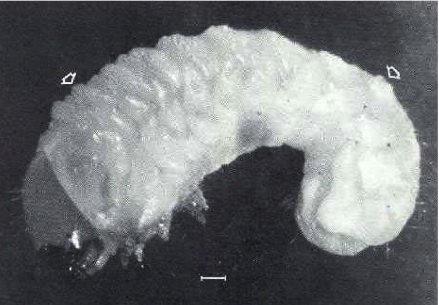 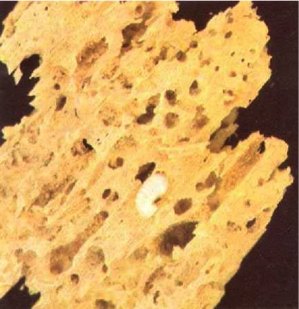 The adult female lays small white eggs on rough-sawn surfaces, in cracks and crevices, or in old exit holes. They hatch in four to five weeks and the larvae bore down into the wood after first taking a bite from the upper part of the egg shell, upon which the female has deposited yeast cells. These symbiotic yeasts enable the insect to convert cellulose to protein, a process further assisted by the secretion of an enzyme which breaks down plant cell walls to simpler sugars.

The larvae feed within the wood (Fig. 4) and develop fastest at relative humidities over 70% and temperatures between 22oC and 23.5oC. The fully developed larvae excavate small chambers free from bore dust just below the surface of the wood, in which they pupate. The pupal period lasts from four to eight weeks, after which the adult bores to the outside making a circular exit hole (Fig. 5). Under normal conditions the time from egg to adult is three years in kahikatea sapwood and four years in the sapwood of rimu and radiata pine. The rate of development is influenced by temperature, moisture, and nutritional properties of the wood. 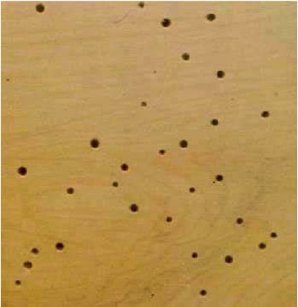 Adults may be found from November to January, and live for up to four weeks. They do not feed. In laboratory experiments some females have laid more than 100 eggs each, but in natural conditions considerably fewer may be produced.

The most satisfactory treatment is the replacement of affected timbers with preservative treated wood. Where this is impractical, infestations may be destroyed by fumigation with methyl bromide or phosphine, but reinfestation can occur as soon as the gas has dissipated. Such fumigation can be done only by a licensed operator. Treatment with a contact insecticide with good residual activity is desirable after fumigation.

In New Zealand larvae of the house borer have been found to be parasitised by a braconid wasp Spathius exarator (L.), a pteromalid wasp Theocolax formiciformis (Westwood), and a mite Pyemotes ventricosus (Newport), but it is not known to what extent these limit numbers of their host.