Report: The Pest Status of the Blackbutt Leafminer on Durable Eucalypts in Northland

The Blackbutt Leafminer (Acrocercops laciniella) was first recorded in New Zealand during 1999 in Auckland. it is not known how it was introduced but it is possible that the large volumes of  shipping containers coming into New Zealand from Australia could facilitate such introductions of unwanted pests from Australia. The pest rapidly spread throughout the North Island and was detected in the South Island in June 2004.

Blackbutt Leafminer is a small moth (Lepidoptera: Gracillaridae) whose larvae cause leaf-mines in a very wide range of eucalyptus species. It is related to native Acrocercops species which cause leaf-mines in Kauri, (Acrocercops leucocyma), Coprosma (Acrocercops zorionella), and Lancewood (Acrocercops panacivagans). There were ten species of Acrocercops present in New Zealand prior to the introduction of A. laciniella, including another Australian forestry pest  Acrocercops alysidota, which attacks young developing phyllodes of Tasmanian Blackwood Acacia melanoxylon.  A. alysidota was first recorded in New Zealand in 1880 and has been successfully controlled by two species of eulophid wasp first discovered in 1997.

No studies have been undertaken to date to determine if any parasitoids or other controlling agents present in New Zealand could maintain levels of this pest below an acceptable threshold.

The initially high levels of damage on all eucalyptus species observed in Northland caused equally elevated levels of concern in growers. Having witnessed a plethora of newly introduced eucalypt pests, which only attack specific species of eucalypt, growers concern was raised by the cosmopolitan dining habits of this pest. Although damage by A. laciniella has been observed on all species of eucalypt present in Northland, the focus of this project was to assess levels of damage to Northland's prime hardwood timber eucalypt species, including Blackbutt Eucalyptus pilularis, Yellow Stringybark E. muelleriana, White Stringybark E.globoidea, Blue-leaved Stringbark E.agglomerata and Tallowwod E.microcorys.

Eucalyptus trees are known to be fairly resilient to attack from pests, and are even known to recover from complete defoliation. However the level of recurrent damage at which a previously healthy tree's productivity and health is compromised is difficult to assess objectively. This study was not designed to determine that threshold, but to evaluate levels of damage to a range of species, monitor the changes in levels of damage over a period of time, and to compare levels of damage in different eucalypt species.

Single branches were cut from the upper crown of six randomly selected 5-8 year old trees within stands of each species selected, at a location near Kerikeri, Northland. Leaves were removed from the branch, starting at the top and working down each branchlet in only the top section of the crown, until over 100 leaves were collected. Young leaves below one square centimetre were not included because they had not matured enough to develop mines. Leaves were then individually assessed and ranked within one of five categories. These categories were:

Acrocercops laciniella (Blackbutt Leafminer) visible under the leaf surface, and then exposed. 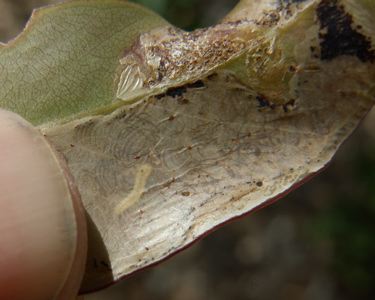 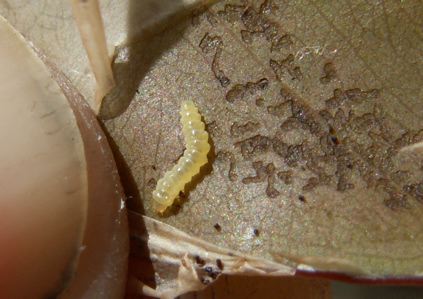 The first year, 2004, was equally divided into three foliage collections during March, July and November.  Three branches cut from different areas of the crown were assessed for E.muelleriana in March so that comparisons within the crown of a single tree could be made. All other assessments in all three years were made from one branch removed from the crown.

Four assessments were made in the second and third years, during February, May, August and November.
Results have been collated for each species and period of time.

Visual assessment into categories of damage can be very subjective. To avoid variation in the way different people would assess foliage (which could upset the accuracy of results), only one person undertook all the assessments in this study. The blisters caused by this leafminer are only on one side of the leaf, so both sides of each leaf were assessed prior to categorising the leaf. The potential of each leaf to photosynthesise into the future was also taken into account. Although the blister is only on one side of the leaf, the other side can rapidly senesce. Because the pest mines into the leaf when it is young and expanding, distortion results that reduces the photosynthetic area of the leaf. Therefore accurate assessment is very difficult because each leaf looks different, although accurate enough to build a good overall picture.

It was decided that it was only necessary to assess damage from one area of the crown because differences in levels of damage across the canopy were visually insignificant and because of the costs involved in replicating levels of damage in one tree for each assessment.

Trees were chosen for each species randomly but weak and insignificant trees were ignored. Individual trees were not necessarily returned to for each collection. There is wide variation in levels of damage between trees of the same species, which may have influenced the results obtained.

Assessment of E.microcorys was abandoned after the first year because of the consistently low levels of damage to this species. However a separate assessment made on a stand of E.microcorys in another location in Northland showed much higher levels of damage. This could be because of the higher exposure to wind in this site, or perhaps the trees are from a provenance which is more susceptible to this pest.

The Author has observed that damage levels appear to increase with exposure to wind in E.cameronii from the same seedlot planted in the same year on different sites on the same property. 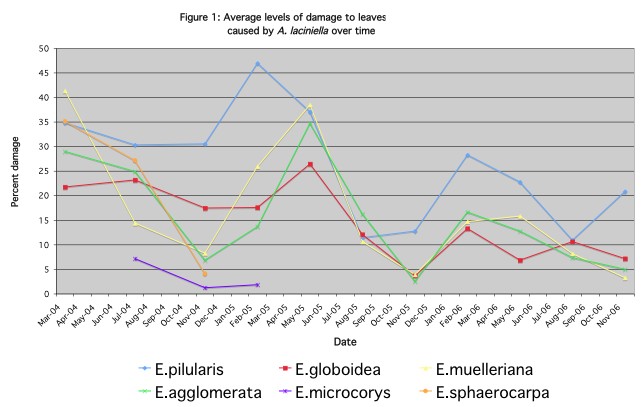 Figure 1 shows that over the three years of this study the average levels of damage to the crowns of all species assessed have reduced significantly. A common pattern for newly introduced pests is to undergo a population explosion before levels reduce and stabilise.

Figure 2 shows levels of damage to a range of eucalypt species during 2004. Blank areas are where species have not been assessed. However, sufficient data was collected to reinforce observations in the field that high levels of damage were occurring to all species except E.microcorys and Corymbia maculata during 2004.

E. pilularis (Blackbutt) is the most susceptible of the monocalypt eucalypts assessed in this study to damage from A.laciniella over time, with high levels of damage continuing during spring 2006.

Levels of damage caused by A. laciniella were high in all species assessed except E. microcorys and E. maculata.

High levels of leaf mines present throughout the study have clearly demonstrated A. laciniella to be the most serious pest to date on our monocalypt stringybark eucalypt species in Northland. Correlating the levels of damage observed to any loss in productivity is difficult, but it is likely this pest is having some impact on productivity, especially in the more susceptible species like E. pilularis. The compound effect that continual introductions of pest species will have on growth and productivity of our timber eucalypts will undoubtedly be increasingly severe over time unless counteracted by subsequent introductions of natural enemies to these pests.

A. laciniella damage to trees appears to increase with exposure to wind.

A. laciniella is present at damaging levels throughout the year in Northland, but appears to have peaks in population levels during late summer and early winter.

Many insects are known to have periodic epidemic cycles. In this case the high levels of damage recorded initially after colonisation of eucalypts in Northland by A. laciniella were not sustained.  Population levels may have permanently stabilised at a lower level, or possibly climatic factors are determining population levels of this pest. Biological control agents may be present, but no parasitoids or predators have yet been associated with this pest in New Zealand.

The Eucalyptus Action group would like to thank MAF Sustainable Farming Fund and the Neil Barr Foundation for funding making this project possible. Grant application »