Hidden away in a little offshoot of the Wai-iti Valley about 30 km south west of Richmond is an arboreal gem which includes in its 71 hectares more than 40 species of exotic trees as well as six hectares of native forest. Almost without exception the trees are thriving, with amazing form, and are very carefully tended

This small valley, which the Tunnel Gully stream runs down, has not always been so lovingly cared for. When Bevan Walker bought the property in 1971 it was covered in gorse, apart from the area of cut-over bush. Bevan recognised the potential for a forest block in the valley which runs to 300 metres above sea level, is in the Moutere gravel zone and has an annual rainfall of 1200 mm. With the help of his father’s V-blade on his bulldozer, Bevan set about clearing and planting the 65 hectares over the following three years.

The initial rotation was almost entirely radiata pine with a few Douglas-fir and coastal redwood near the entrance area. When the oldest trees reached 25 years of age, Bevan began harvesting using his own bulldozer and a three-wheeled log grapple. This continued over the next 15 years, harvesting 2,500 to 3,500 tonnes a year with an average yield of 750 tonnes a hectare which increased to 1,000 tonnes as the last of the rotation reached 36 years of age.

Having completed the first rotation, apart from the Douglas-fir, redwoods and a handful of pines, the block is well set up for future harvests with five well sited skid sites and a linking series of tracks. Several of the skid sites have huts built by Bevan and one has an array of drying timber. There are also five ponds which hopefully will never be needed for fire fighting. These ponds in the valley floor do not see much sun during winter so often freeze over.

As well as harvesting, Bevan is also replanting and tending the next rotation. As anyone who has experienced it knows, planting the second time around can be a trickier operation than the first with harvesting slash, more weeds and regeneration to deal with. Bevan added to the complications of this task by introducing a range of different species.

About 43 hectares of the higher mainly west facing slopes remain in pines supplemented by seven hectares of Douglas-fir. On the valley floor and intermediate slopes there are now 10 hectares of various cypresses, two hectares of redwoods, and smaller areas of Japanese cedar, acacia, eucalypts, red alders and tulip trees. The tulip tree, Liriodendrum tulipfera, is native to the eastern United States and is the largest flowering tree in North America, growing to over 50 metres in height and is widely used there for cabinet and furniture making. The trees are only seven to nine years old at Tunnel Gully but appear to be a very attractive deciduous option.

Some of the eucalypts date back to Cyclone Bola 28 years ago when Eucalyptus fastigata was planted in areas flattened by that storm. Other eucalypts planted are E. nitens, E. regnans, E. saligna, and E. botryoides.
The blackwoods, planted in mixes with redwoods and Lawson cypress, are some of the best forms of this species to be seen and starting to put on decent volume.

There are too many different cypress and Chamaecyparis to mention them all but especially outstanding are the 17 year old Ferndown pruned to nine metres, the handsome Lawsons, the vigorous nine year old Ovensii, and the mix of NZR and Silverwood clones. 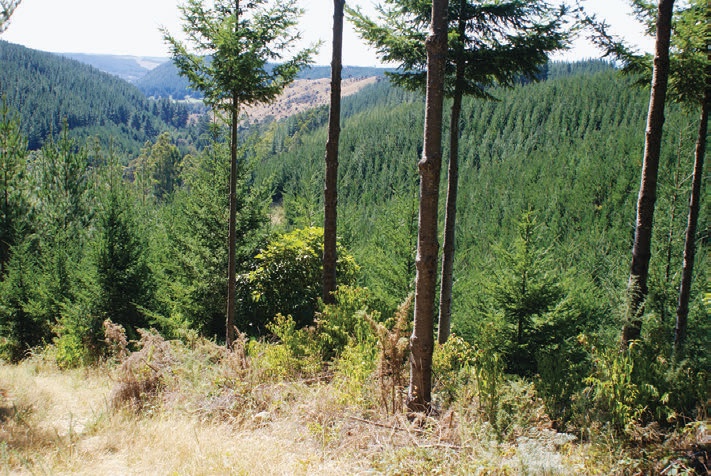 Then there are the three small arboretums planted in the year 2000 between the production blocks and containing a selection of firs, cedars, spruce, oaks, ash and chestnut. Also of note is a two hectare trial block of genetically selected radiata pine established eight years ago by Forest Genetics. These are regularly measured for height and diameter. Appleton’s Tree Nursery who have been mentors to Bevan also have a trial block there.

All of these species have been established in competition with regenerating gorse which Bevan has had to clear away before the first prune.Almost everything has been pruned including the Douglas-fir. In fact the remaining 44-year-old Douglas-fir have been pruned to between 10 and 12 metres. 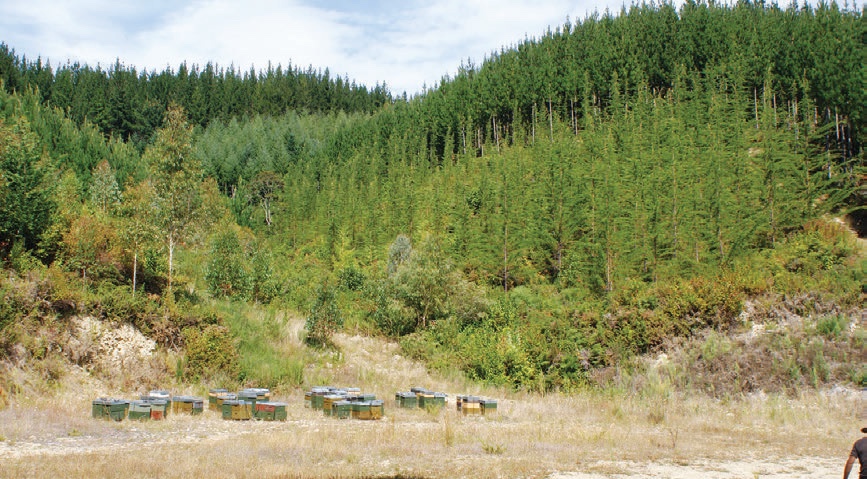 Bevan and his dog Bindy are also avid pest controllers and just last year accounted for 33 possums and 90 rats. As a result of their 15 year effort there has been a noticeable increase in birdlife and notably, weka have moved back in over the last eight years.

As it sits today this is a magnificent mixed age, mixed species forest providing a great environment for birds and people. Worksafe NZ has started using the forest to hold courses on safe tree felling and chainsaw use. Bevan is also working with NZ Cycle Ways Trust to provide an alternative route through his forest for the Tasman Great Taste Trail. This will be needed when harvesting is taking place on neighbouring corporate forests. Use of this developing 175 km trail is expected to be high, especially the section through the 1.4 km Spooner Tunnel just south of Bevan’s forest. 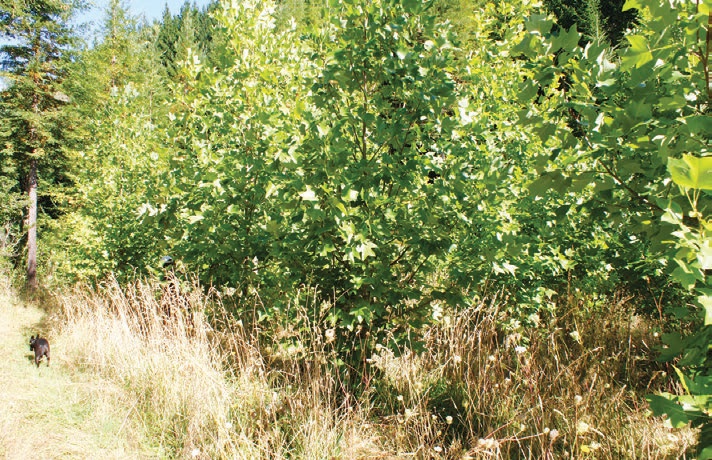 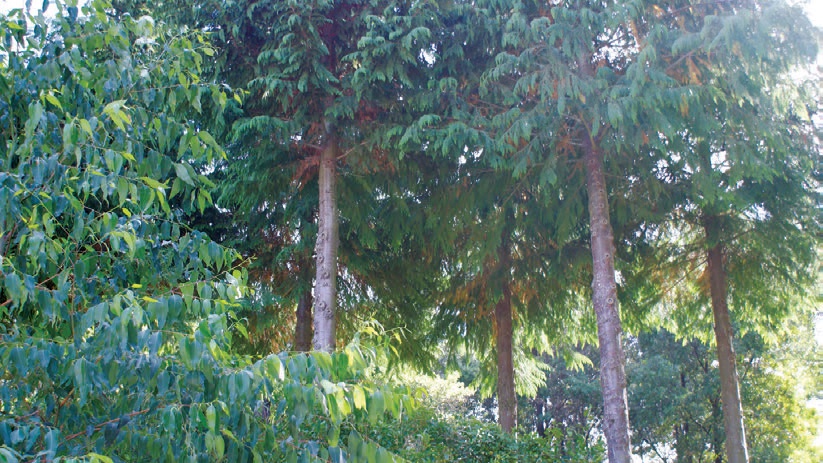 Bevan has been a stalwart of Nelson Branch of the NZFFA, serving 10 years as President, providing advice and hosting several field days. When not working at his forest Bevan is a builder and joiner. He built the family home in Richmond using many different species including pine cladding from his own forest. A video made by Harriet Palmer for Trees on Farms featuring Bevan his house and forest can be accessed here; and an earlier Tree Grower article describes the makeup and construction of their home.

When viewed today, it is easy to overlook the amount of effort which has gone in over 45 years to create such a model forest from a gorse gully, but for Bevan, Nora and family it must it must now be very satisfying to visit and appreciate the fruits of their labour. 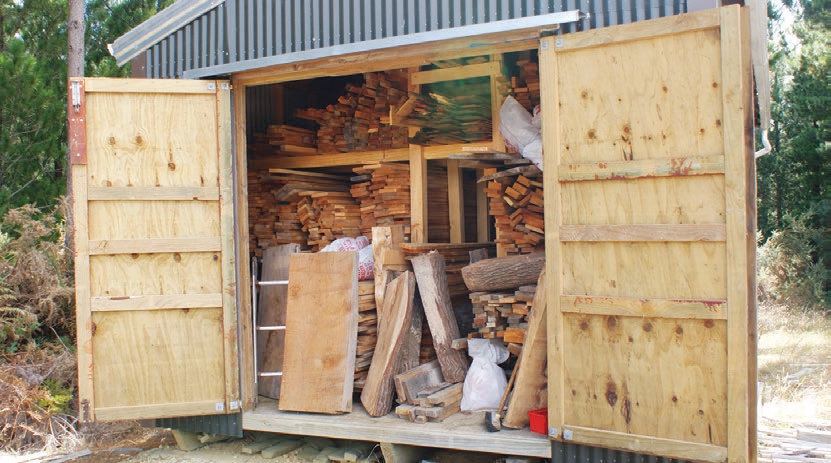 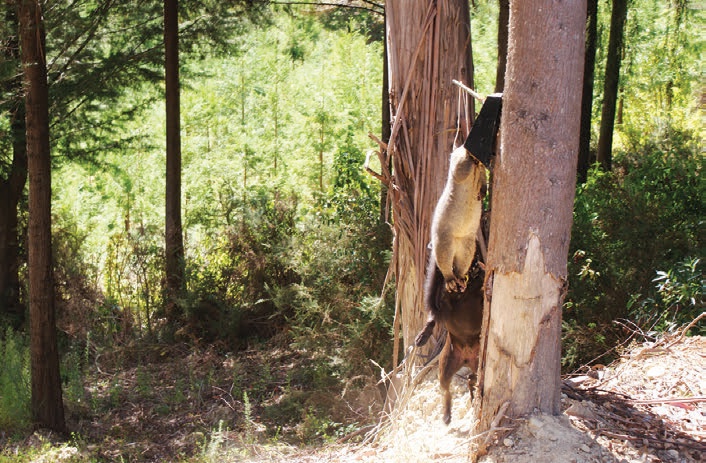 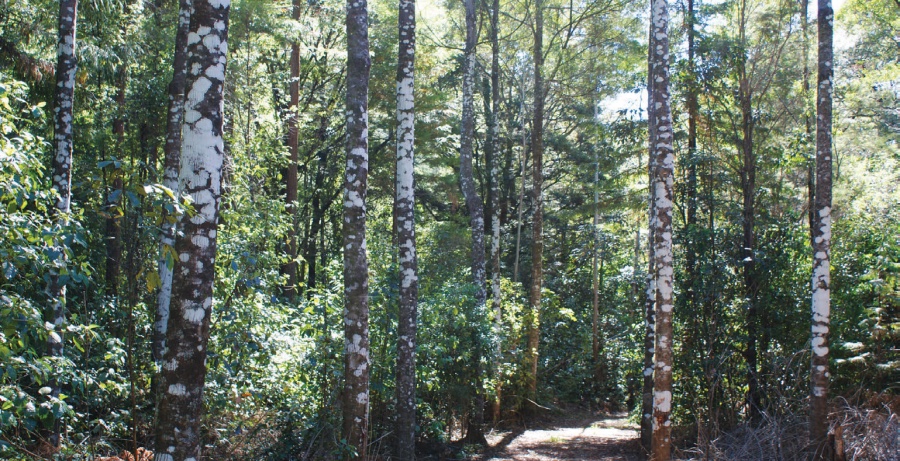