The house of a hundred timbers

Walking through our house with Bevan is like walking through a three dimensional story book. I realised as I researched for this article that every piece of wood triggers a recollection in Bevan of the source, dates and processing.

As a boy, Bevan Walker lived close to Nelson’s Isel Park, and wandered freely amongst the grand specimen trees. Perhaps this fostered his lifelong interest in trees and their properties, so easily recalled by him now. Years of work experience in the building industry placed him in a good position of knowledge where the machine shops were the sawmills, treatment plants, mobile sawmillers and a network of other contacts.

It was a natural progression for Bevan to plan a purpose-built house and to start collecting interesting timbers that he happened to see or hear about, a process that spanned some 10 years. A back paddock and a skid site on a high ridge became ideal timber yards.

His own woodlot provided all the framing and cladding for the new house. Having planted the trees in the early 1970s, Bevan hand picked the straightest 28-year-old pine logs from a small harvest in 2000. He employed a sawmiller with a Woodmizer portable mill to cut the logs on the woodlot.

With no house plans at that stage, he had to make an educated guess as to the quantities needed. The cladding was cut as 300 mm by 25 mm with battens of 75 mm by 25 mm.

This was all fillet stacked and air dried for a few years on the top ridge of the woodlot. Then, just before building in June 2003, all this timber was treated and stacked on the building site. 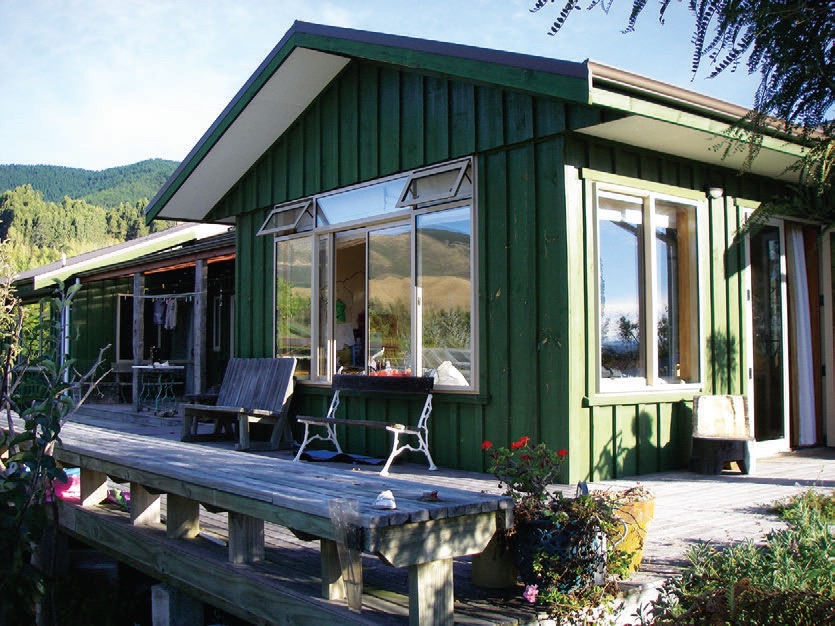 In 1992, Bevan spotted some large macrocarpa logs at a Takaka sawmill. He had them milled, then stored outside under covers, until they saw the light of day again transformed into three chunky beams of 300 mm by 100 mm by 4.4 metres. These were hoisted into place as feature beams, above the family room of the evolving house.

Stemming from these beams, Bevan placed smaller redwood beams, derived from several trees felled at the Richmond showgrounds around five years before. Macrocarpa sarking, tongue and grooved and bevel-edged, was placed above this decorative beam work. This macrocarpa was from a neighbour’s 60-year-old trees, along with some 40-year-olds from Motueka. Macrocarpa is the main decorative wood used internally, with about 2,800 metres used, including a large deck.

Following the theme of feature ceilings, the lounge has a large central beam of finger-jointed macrocarpa. A local specialist was used to create and dress the beam, which only required oiling before being hauled into place. Exposed rimu rafters project from the beam.

Back in the mid 1990s, Bevan contacted the Department of Conservation as there was a large rimu tree that had fallen during a storm and was blocking a waterway in a Marlborough Sounds scenic reserve. He won the tender for the log, and with his own chainsaw mill, cut it up on site and wheel-loaded it out of the bush to a waiting truck. Acknowledging the stability of rimu, but also for something different, he chose to have the mill cut the flitches into rafters and shiplap. Again, macrocarpa sarking is used above the beamwork.

The rimu shiplap has been used to line external-facing walls and doors in the lounge and family rooms. Because of the darkening effect of wood on interior lightness, a careful balance was considered, between shiplap and gibbed walls to bring light further into the interior.

Throughout the house, the windows are made from a 60-year-old gum specimen tree that was grown a short distance away on an old family property. Bevan felled the tree during the mid 1990s, and had a portable sawmill cut the log. Once he had a house plan, he calculated how much timber he needed for the reveals, which corresponded to the amount of gum timber stacked in his backyard. This was machined at a local shop, then delivered to the window manufacturer to install into the windows. This gum has an even, rich reddish colour and is hard wearing.

This process of matching timber to the job, depending on quantities available, also applied to the architraves and skirting. Redwood, Douglas fir and macrocarpa had been collected from various small local sawmills. Some red beech left over from a kiwifruit property’s trellis system was used for some of the architraves, with a decorative groove machined in. Using the timbers in this manner, often against a backing of cream gibbed walls, has made a feature of whatever timber it is, without creating an overwhelming wooden patchwork. Hard wearing eucalypt flooring from New South Wales works smoothly underfoot for a third of the house. It was stacked in the house for three months before nailing to complete its seasoning within the environment in which it was to be used.

An unexpected bonus has been the 50-year-old Japanese cedar used for the internal doors. The stability and appearance of the timber attracted Bevan, but the tight knots and rich colour has exceeded expectations. Driftwood handles complete the very quirky individualised look.

On entering the house through the chunky front door made out of matai, you are not sure whether to admire the wood or the trophy heads lining the entry. Wide-cut redwood shiplap extends to a lighter ceiling of exposed radiata rafters. Terracotta tiling complements the eucalypt flooring. Off to one side is the den. Traditionally wood lined, this boasts walls of Himalayan cedar, redwood, and Leyland cypress shiplap. It is one room where Bevan has allowed himself to over-indulge the display of his timber collection.

After the completion of the basic house, internal structures have been added intermittently, again with function and display going hand-in-hand. The elm kitchen island and shelving boasts a distinctive grain. The main bookcase is from planks cut from a 60-year-old macrocarpa windblow. All curtain rods are matai from Karamea. The metal track is grooved into the underside of the rod, and had the curtain shop puzzling as to how it was going to work.

Every bit of interior wood in this house has had two generous applications of natural Organoil, applied before the timber was installed. Manufactured in Australia, Organoil is produced from natural plant oils, and penetrates the timber structure rather than sitting on the surface. There are no petroleum-based varnishes in the house at all.

There has been no need to re-coat any surfaces in the five years of living in the house, and the oil has probably helped stabilise all the timbers. There is no cracking or movement, and the individual look of the many different timbers has been maximised by the oil.

By knowing timber properties, professional cutting, allowing plenty of time to dry, and the application of a suitable finishing product has resulted in the successful use of many timbers. Living in this house with its eclectic collection of woods has been easy. The wood creates an aura, but it is a pleasant one.