After our visit to Graham and Heather Milligan’s farm we had lunch at the Dipton Hall where we had presentations from Ernslaw One and Meridian Energy. Ernslaw had a problem with planting Douglas fir on exposed ridges of their property, whereas these areas would be ideal for a wind farm. This fortuitous coming together, combined with a land purchase and a lease arrangement with a local land owner, formed the basis of a favourable site. The main requirements are adequate wind and a satisfactory connection to the grid.

Alot of preliminary meteorological, engineering and environmental research was needed including the use of an avian radar system to map bird flight paths to make sure there would be no problems with birds flying into the turbine blades. Meridian undertook community consultation and the project was supported by the locals.

Resource consent was granted and the decision was not appealed. Construction on the site started in 2005 and commissioning was in 2007.

The planned life of the generators is only 20 years and by then there are expected to be considerable design and technological advances. At this stage Meridian would have to re-apply for a new consent if it decided to upgrade the infrastructure to turbines with greater capacity.

The farm consists of 29 turbines, each with an output of two megawatts, supplied by Vestas, a large Danish company. Each tower is 68 metres high and the three blades are 39 metres long and weigh 6.5 tonnes. They are made from glass fibre reinforced epoxy. The foundation contains 380 cubic metres of concrete and 36 tonnes of steel. The nacelle of the turbine weighs 65.7 tonnes and contains the generating and control equipment. Each unit is therefore self contained and requires servicing each six months. 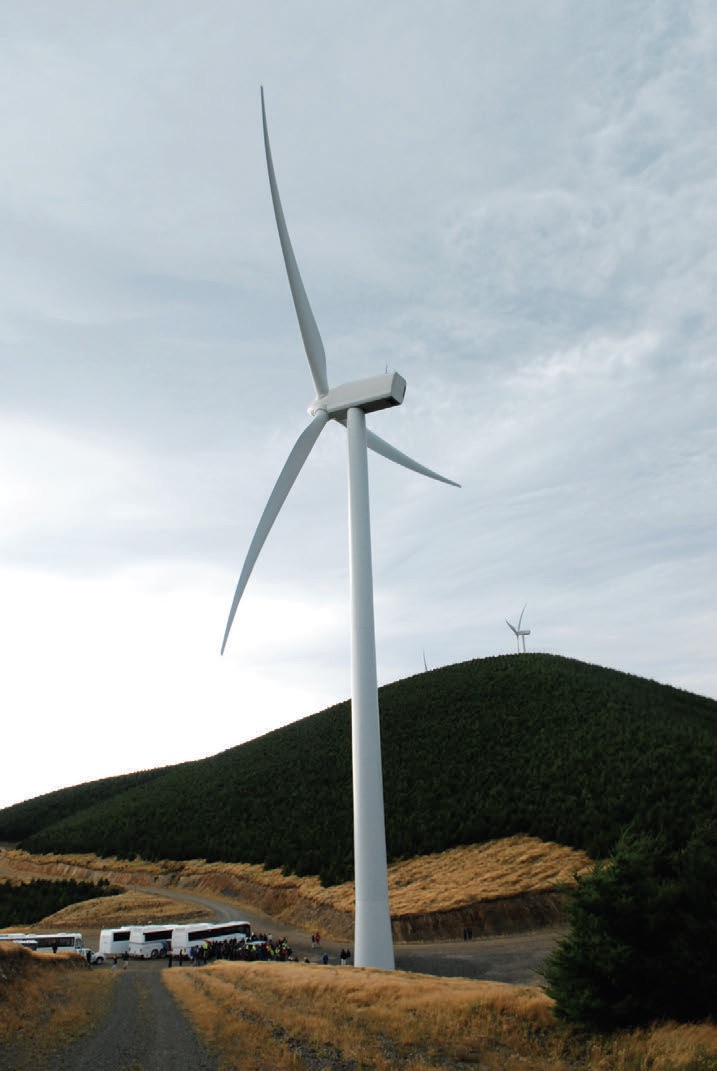 The turbines start working at a wind speed of 14.4 kph and reach the design output at 54 kph turning at a rate of nine to 17 times a minute. Above 90 kph the machine is shut down by feathering the blades. Doubling the wind speed increases the power available for generation by a factor of eight. The top assembly moves so that the plane of rotation is always at right angles to the wind. The control computers adjust the angle of attack of the rotors by rotating them in their long axis so that output is maximised for each wind speed.

At full output the production is sufficient for about 30,000 homes. The target output is 198 gigawatt hours a year with a current level of 180 gigawatt hours. The generators and turbines operate at full capacity for 40 per cent of the time. In Europe the average is around 20 per cent, in the Manawatu it is 40 per cent and Wellington 50 to 60 per cent.The costs of generation for different types of power are shown in the table, although Emissions Trading Scheme charges will make a difference to the thermal power prices.

Denis Hocking asked what the carbon balance would be, taking into account all of the manufacturing, establishment and maintenance related emissions against the saved emissions compared to say coal. Unfortunately this information was not available but would be of great long term interest.

Visually the farm is quite dominant when seen from the surrounding countryside. However there is no doubt that your eye is attracted to the farm, although in reality it fills a very small proportion of any 360 degree view. It would be interesting to know the extent to which locals actually notice the farm in the long term. 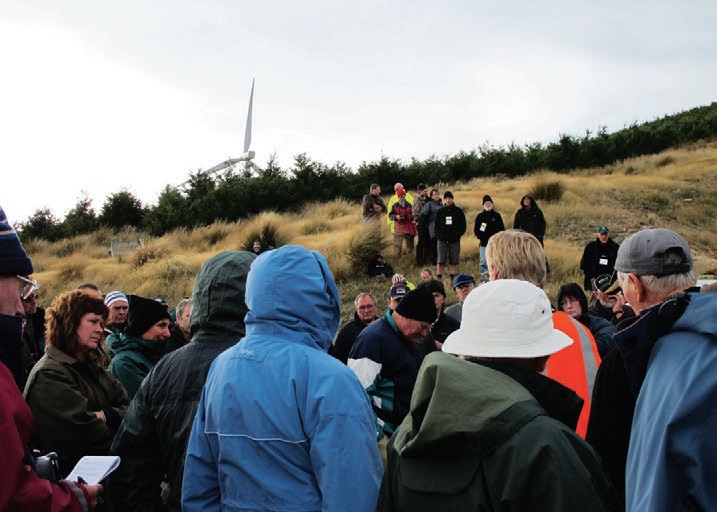 There was a strong breeze blowing during our visit. Standing directly under the rotors a normal conversation was easily held despite the low level swishing sound. Given that there are few settlements built near exposed ridges it is hard to imagine that sound will be a long term issue. In Europe it is common to see cattle grazing happily under large installations.

I got the feeling that many people in the group felt somewhat reassured by what we saw and heard. Meridian’s public relations and community involvement should be the standard around which future projects are considered.

What about the trees?

There is no question that White Hill is windy. The turbines benefit from this but the Douglas fir planted underneath and around, but away from the very windy ridges, merely withstand the buffeting. In spite of this they seem to have grown well in the 10 or so years since planting. 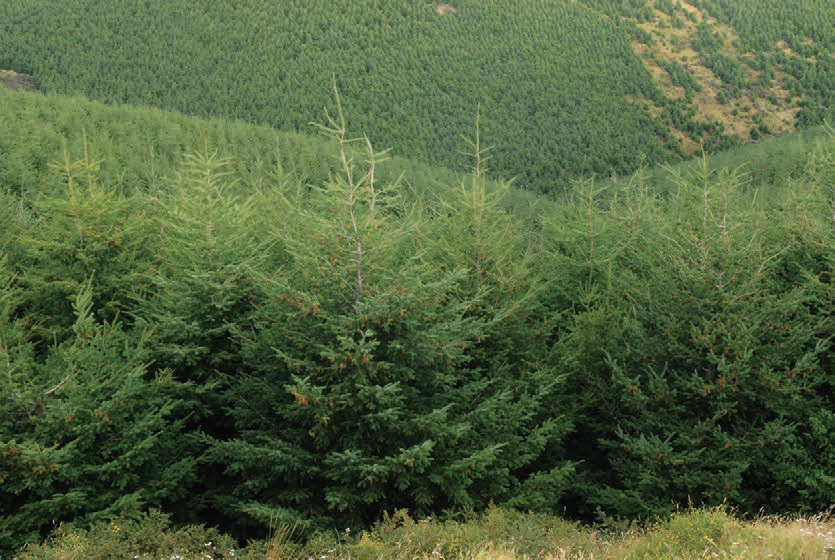 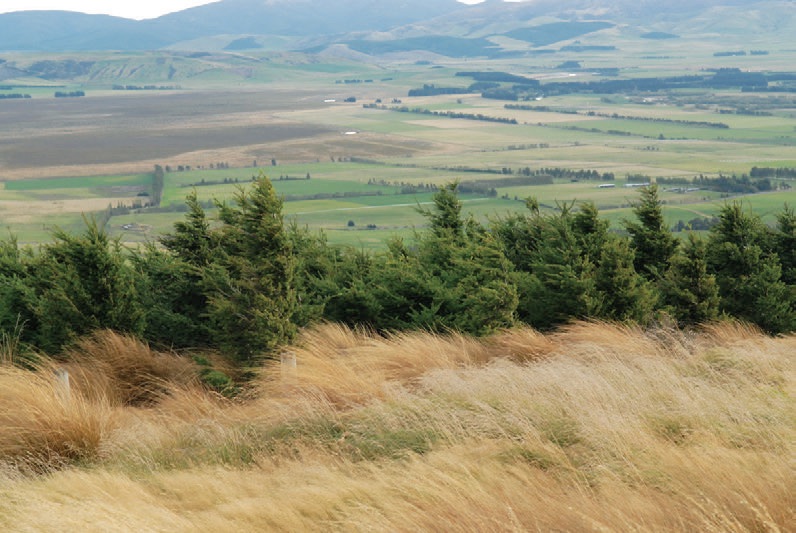 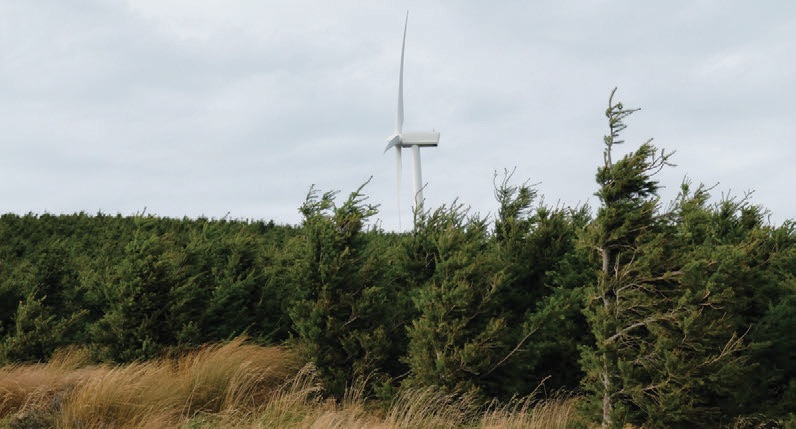