Type of injury
Leaves become disfigured but tree growth is not usually affected. Heavy infestations, which are rare, may cause premature leaf drop or reduce photosynthesis. 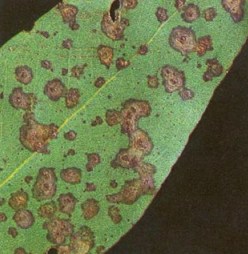 Diagnostic features
This description is applicable to both species as they cannot be distinguished in the field. Brown, roughly circular (2-18 mm in diameter) spots, frequently composed of concentric rings of different shades of brown. Lesion centre often raised and with a crusty appearance. Small, black dots (the fruiting structures) visible on the spots. Caution : These leaf spots look similar to those caused by Aulographina eucalypti. However, the lesions caused by Trimmatostroma spp. go right through
the leaf and the same lesion can be seen on both sides, whereas Aulographina lesions are generally limited to one surface of the leaf.

Disease development
Spores are formed on the surface of the lesions in black powdery masses which are frequently arranged in a circular pattern. They are wind-dispersed and are found throughout the year.
Infection levels tend to be greatest in the lower crown. New season's leaves do not become infected until mid- summer.