Notes: It is difficult to separate symptoms of this disease from those caused by frost damage alone. Allantophomopsis pseudotsugae does, however, cause browning of tissues beneath the bark, and infection is not restricted to current shoot growth, whereas frost damage is frequently confined to current shoots which do not initially appear brown when bark is removed. Symptoms may also be confused with those of Diplodia pinea which causes similar damage. 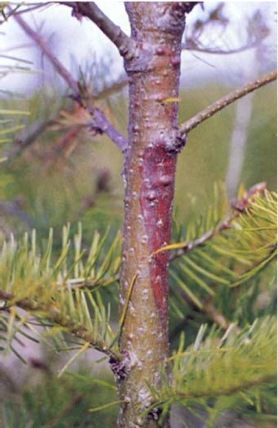 Disease development
The fungus is commonly found on dead conifer branches and foliage, but can also be a wound parasite which invades living tissues after first colonising dead branches, frost-killed shoots, or frost-induced bark cracks. Infection by spores may occur either at shoot tips or lower in the stem. Growth within living tissue is limited, and infection in shoot tips does not normally grow down past the second or third internodes. Lower stem infection may lead to canker formation or, if girdling occurs, to wilting and death of the whole shoot.

Economic importance
Allantophomopsis pseudotsugae serves chiefly to aggravate the effects of frost damage and may adversely influence tree growth and form. It is not usually fatal, except on newly planted or weakened trees. This fungus caused some concern in the 1930s when plantations of exotic conifers were more commonly established in frost-prone localities and on sites at more than 600 m above sea level. Today the disease is of limited importance, occasionally appearing on sites exposed to heavy frost, particularly if windrowing has been carried out and if unsuitable planting stock is used. Allantophomopsis pseudotsugae may also damage nursery seedlings.

Control
No control is necessary beyond the usual precautions taken to avoid frost injury.