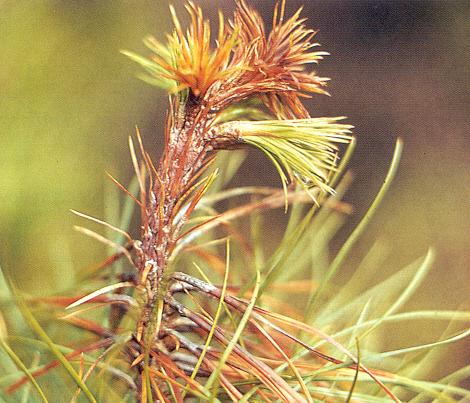 Disease development
In the nursery, S. sapinea is generally considered to be a wound parasite, infecting tissue that has already begun to wilt through other causes such as drought or being wrenched in dry weather. It may also infect tissue which has been physically or chemically injured. Infection occurs when spores, which are spread by water splash, land on susceptible tissue, germinate, and penetrate the host epidermis. Once infection is established, most seedlings show considerable resistance to continued invasion of the tissue and the fungus spreads only a short distance in the stem.
The soft tissue of the stem just below the leading shoot is the point commonly attacked. During the early stage of development, the stem may be purplish around the point of infection. The shoot then wilts above this point, turns brown, and crooks over. Numerous small black fruiting bodies on the dead stem and needle tissue produce spores, which are liberated under moist conditions.

Economic importance
Although this disease seldom causes mortality, seedling height is reduced. Loss of the leading shoot can occur more than once and this may lead to a stunted bushy plant which is usually not plantable.