From Scion publication Forest Research Bulletin 220,
An Introduction to The Diseases of Forest and Amenity Trees in New Zealand.
G.S.Ridley and M.A. Dick 2001.

Symptoms and disease development: This condition was first studied in detail in 1926 but was probably present in New Zealand long before that. The fungus is primarily a wound pathogen but can attack both non-suberised and suberised tissue under damp conditions. It is of local significance on certain microsites that provide suitable warm and humid conditions for infection.

Leader dieback: Infection of the current season's growth results in the dieback of terminal and lateral shoots (Fig. 64). The first sign of infection is the appearance of a small, light-brown lesion that extends and becomes purple and then dark-brown. The lesion does not extend beyond the junction of the current and the previous season's growth. The shoot usually droops at the point of infection and the part above the lesion dies. Needles on the infected shoot turn reddish-brown and persist for a long time. Warm temperatures (20°-25°C) and high humidity (>90% relative humidity) favour the development of infection in green shoots. 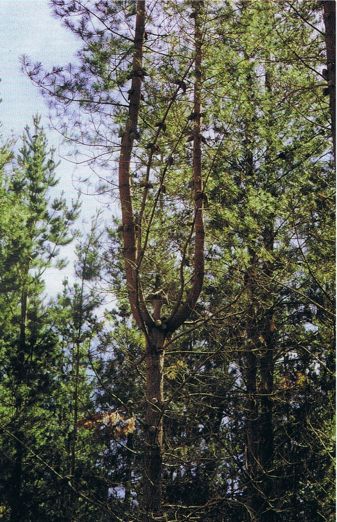 Crown wilt and whorl canker: Infection of the suberised woody stem can lead to the death of a considerable portion of the crown or even of the whole tree, depending upon the point of infection (Fig. 65). Infection usually occurs through wounds, although direct infection of sound woody stems has been recorded in Hawke's Bay and Canterbury under conditions of severe drought. Such direct infection is uncommon. Pruning wounds are the most common points of infection of woody stems (Fig. 66). The cambium above and below the infected pruned stub is killed, giving rise to depressed areas (Fig. 67, 68). This type of injury is known as whorl canker. If several pruning stubs in the same branch whorl become infected, crown wilt may result. Discoloration and death of the inner bark first indicate infection of the woody stem. From the inner bark, the fungus invades the ray cells in the wood and finally reaches the pith, where it rapidly moves up the stem to invade further ray cells; downward movement is generally limited. Infected wood develops a characteristic blue stain and wedge-shaped blue sectors in the wood are very commonly seen in trees infected by Sphaeropsis sapinea. Wilting of shoots, from a single branch to the whole crown depending on the extent of infection, follows invasion of wood by the fungus. The needles turn first chlorotic and then reddish-brown. Pruning wounds are more likely to become infected when the tree is placed under stress; carrying out the pruning under hot and dry conditions or removal of more than 50% of the crown in one lift predisposes the tree to S. sapinea infection. The fungus fruits prolifically on cones and on slash and produces large numbers of conidiospores, which are dispersed by rain splash. No sexual state is known in New Zealand or elsewhere. 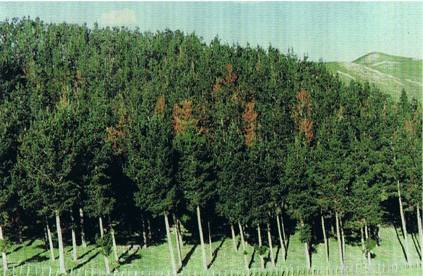 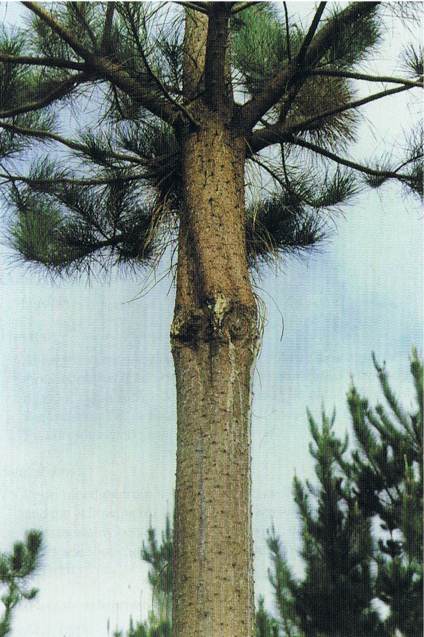 Fig. 67: Pinus radiata stem showing longitudinal depressions above and below the whorl after infection by Sphaeropsis sapinea through pruned stubs 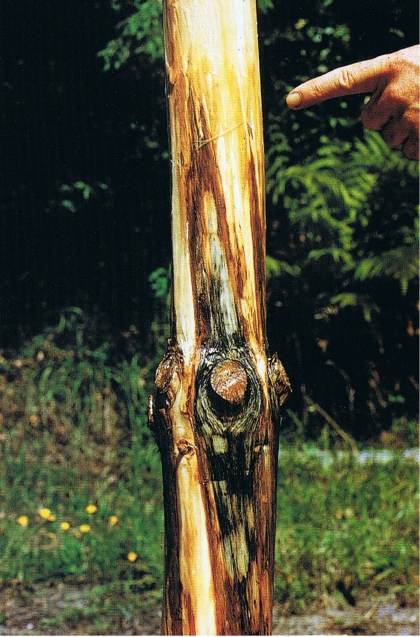 Fig. 68: Bark removed from a Pinus radiata stem to show development of blue stain in association with infection of a pruned branch stub by Sphaeropsis sapinea

Economic impact: Leader dieback is a serious problem in only a few localised areas, mainly those in closed valley systems. While tree death rarely occurs, severe malformation and multi-leadering can result from repeated attacks. In one very badly affected area, a 63% reduction in potential volume has been reported but such cases are extremely rare. Crown wilt through direct woody stem infection is also not common and has been reported mainly from small farm woodlots on drought-prone sites. Pruning wound infection is relatively common but it is usually confined to a small area and rarely causes crown death.

Control: Control is usually not necessary. It may be better to change species rather than attempt to control S. sapinea infection on sites that are particularly susceptible to attack. Chemical control using copper oxychloride (0.4%, three applications a fortnight apart, starting in November) has been successful in nurseries. Infection of pruning wounds can be almost eliminated by carrying out the operation in winter and by avoiding the removal of more than 40% of the crown.

Notes: The disease caused by S. sapinea defies neat classification. The fungus can cause dieback by infecting stressed primary shoot tissue; it can attack stem tissue mostly through wounds, causing stem cankers, and from there it can attack the vascular parenchyma thus disrupting water supply to the crown and causing wilting.