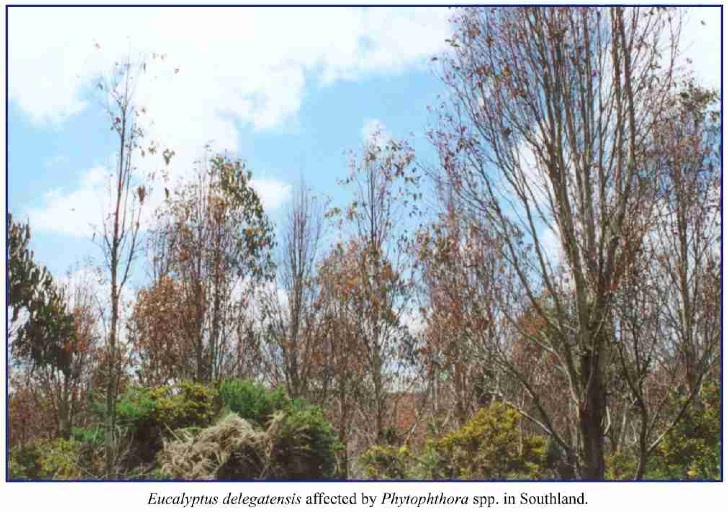 A locally severe crown disease of Eucalyptus trees has been recorded since 1986. The main species affected are Eucalyptus saligna, E.botryoides, E.regnans, E.delegatensis and E.fastigata. Dieback has been recorded in the central North Island and in Southland. The organisms responsible are two species of Phytophthora which have recently been described as Phytophthora captiosa and P.fallax. They were described in Mycological Research by Margaret Dick and Kiryn Dobbie Forest Biosecurity & Protection, in collaboration with David Cooke and Clive Brasier from the United Kingdom. The paper is available on-line at www.sciencedirect.com.

Leaves, petioles, seed capsules, and peduncles, and also twigs may become infected. The effects of the disease range from minor leaf spots to major foliage loss and sometimes dieback. The two fungi are the first Phytophthora species to be described only from New Zealand and the first to be closely associated with the foliage of Eucalyptus . The majority of Phytophthora species live in the soil and cause root disease, with those species affecting aerial plant parts usually occurring on small plants. One might ask (as has your entomologically orientated editor) what they are doing in canopies of Eucalyptus as high as 20 metres? Their modes of infection and dispersal are unknown. Phytophthora captiosa been isolated from the soil beneath symptomatic E. saligna and E.botryoides and so a 3-year trial was carried out to determine whether invertebrates might be acting as vectors from foliage. Traps were employed on the ground, on tree trunks, and in the canopy of a stand of E.saligna that had suffered foliage loss over a 2-year period. Various types of traps were used to catch as wide a range of invertebrate species as possible. Significant numbers of invertebrates were trapped and 20% carried one or more species of Phytophthora or the closely Pythium , but the target species was isolated only once. Clearly more work is required on the mode of dispersal, as is work on their distribution and geographic origins. Neither P. capitiosa nor P. fallax has been found on Eucalyptus in Australia. It is, however, possible that they do exist there but have attracted no attention because they are in equilibrium with their hosts and produce no overt symptoms. Never mind, at least we now have names for them instead of referring to them as new Phyto. I and new Phyto.2, or the like.

From Forest Health News No. 34, August 1994.
DIEBACK OF EUCALYPTUS SALIGNA
The annual foliage loss and dieback problem of Eucalyptus saligna associated with a species of Phytophthora in compartment 7 at Rotoehu Forest was first noticed this year on 1 September. No dieback had been noticed on my previous visit to the area on 5 August.
In the very near future one of the affected trees will be felled for detailed examination

From Forest Health News No. 11, July 1992.
During the July aerial survey Eucalyptus saligna in some parts of Rotoehu Forest was observed to have extensive foliage dieback. This is reminiscent of the disease which caused quite substantial defoliation in 1986-1988 of E. saligna at Rotoehu and of E. botryoides in Whakarewarewa Forest. Isolations made from the foliage yielded the same Phytophthora sp. as previously recorded.