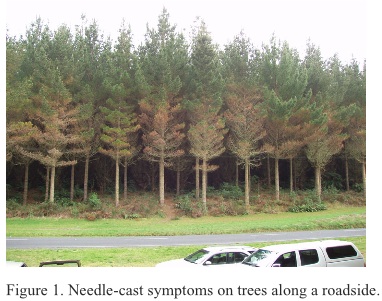 The reported problem was Pinus radiata trees along roadsides showing yellowing, and browning to greyish decaying foliage on the lower half of the crown. The tops of the crowns remained green (Fig.1). Needle yellowing was the predominant symptom (Fig. 2) and affected needles were easily detached from branches by shaking — typical of Cyclaneusma needle-cast.

On some trees the lower crown under the Cyclaneusma-affected middle section had brown to greyish foliage that appeared to be in an advanced stage of morbidity and the dead needles could NOT be dislodged by shaking (Fig. 3 and 4). The needles could be heard detaching from the branch as they were ripped off. These symptoms were described as typical of Physiological needle blight (PNB). Lindsay Bulman advised that the main infection period for Cyclaneusma minus occurs around April and that it can be isolated from both diseased and healthy needles.

Cyclaneusma can act as an endophyte and it is unclear what triggers symptom development (Margaret Dick, pers. comm.). Individual tree genotype is an important factor in tree response.

Cyclaneusma seems to be the predominant cause of the needle-cast disease in Kinleith Forest. Physiological needle blight, if present, usually appeared at the bottom of the crown and Cyclaneusma needle-cast was often present on the same tree. The symptoms we saw (needle yellowing and shedding of needles in mature age-classes, often excluding the youngest) were those we would normally ascribe to Cyclaneusma needle-cast. 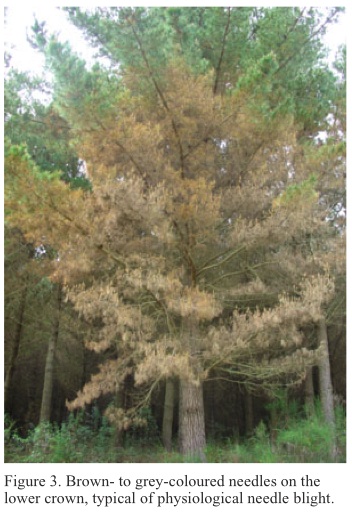 There did not seem to be any difference in opinion on this point, apart from comments that the proportion of trees affected seemed  higher than usual. However, there were patches of needles on some trees that were dead and did not shed readily. These symptoms were of interest to me, and were referred to as physiological needle blight (PNB) needles. I would expect to see dead attached needles on branches that have died at the base of the green crown in closed canopy stands, but not on road margins where there is ample light.

These attached dead needles warranted closer investigation. For these roadside trees, PNB symptoms occurred on trees with predominantly Cyclaneusma needle-cast symptoms. I asked if we could visit trees with similar, dead, attached needles on trees without such severe Cyclaneusma symptoms. Such sites were rare; however, Lindsay Bulman showed the group a patch of dying trees on an ex-skid site close to the roadside. These trees were smaller than trees in the adjacent stand (perhaps because they were from natural regeneration or planted into subsoil). Needle symptoms were distinctly different from the predominantly Cyclaneusma-affected trees we had been viewing. These trees had dead grey-coloured foliage over 80% of their crown length, and needles were firmly attached to the twig. The buds were alive.

The symptoms were the same as seen on affected trees during an outbreak of PNB, according to Lindsay. These needles had died uniformly and quickly over a major length of what should still have been green crown, and the normal leaf abscission process had not had time to occur. There were no obvious sign of needles having wilted. This is odd, because nothing new or unusual has been isolated from needles affected this way. Suggestions at the time to explain these symptoms included: (1) an unknown fungus which cannot be cultured in laboratory; (2) a toxin, to explain death of needles — it was suggested that extracts could be applied to healthy tissue culture material; (3) relative timing of infection 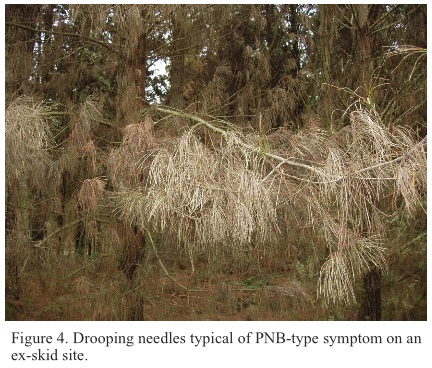 by Cyclaneusma in combination with other known agencies, due to a particular set of environmental conditions. I did notice that each of these trees had Cyclaneusma needle-cast symptoms in the upper 20% of the crown. The surprise was the length of crown affected by dead, strongly attached needles.

Effect of defoliation on tree growth

During spring the sight of yellow or brown foliage, and resulting premature needle casting can be alarming. Severely affected trees will be losing a significant proportion of their photosynthetic capability. An average disease level of 60% will result in about 45% volume loss. However, light infection (25–30% of the crown) is not as serious as it appears. For example, during the field trip discussed above, the roadside trees showing Cyclaneusma symptoms had strong growth of 0- to 1-year-old needles. The older age-classes were yellow or missing, but represented only about 30% of the projected crown area. This projection is of the inner part of the crown. However, the effect on total leaf area of losing older needles can be expected to be quite small, especially for one-off events. As an example, the cross-sectional area of a stem increases as the square of the trunk diameter — so the outer 10 rings have four times the area (and volume) of the inner 10 rings (assuming rings are same width throughout). The same applies to leaf area. The 1-year-old needles form a larger proportion of the tree leaf area than the older needles closer to the stem.

Thus the loss of needles that are more than 1 year old has markedly less effect on growth potential than the loss of current season needles. In addition, it is the current foliage which releases the hormones that stimulate the cambium to grow, so there needs to be a good crop of young needles forming each year. Loss of older needles means less sugar for growth, but the older needles are less efficient and lower in the crown where they have less light and so their loss has less effect on growth.

Dothistroma needle blight, if unchecked, can have a far more severe impact on growth than Cyclaneusma needle-cast. An average disease level of 60% will result in volume loss of about 60%. Dothistroma is different because it takes out needles of all age-classes, including the youngest 1-year-old age-class, and so the base of the crown rises. A 30% loss, including that of current season’s growth, has more severe impact because it equates to more leaf area.