From Scion publication Forest Research Bulletin 220, An Introduction to The Diseases of Forest and Amenity Trees in New Zealand, G.S.Ridley and M.A. Dick 2001.

Symptoms: Progressive yellowing and browning of foliage, beginning with older needles, but progress may be uneven as some branches are affected before others (Fig. 79); resinosis on roots and root collar, and cankering may occur; small pads of white or pale pink fungal tissue on root surface below and just above soil level; occasionally fruit-bodies develop just above soil level (a pink fungal encrustation with pores). 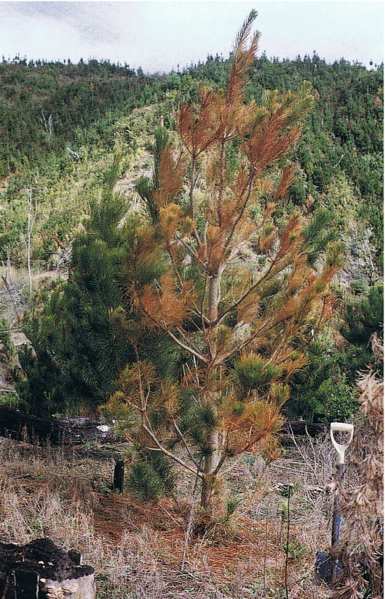 Disease development: Pines become infected through root contact with the fungus inhabiting the wood debris from the previous native forest. Basidiospores may also play a part in setting up new infection centres by colonising stumps or wood debris. Mortality among pines is scattered or in the form of small groups of two or three trees. Infection develops slowly within and between trees, taking several years to progress. Dead roots develop a soft white wood-decay that may be traversed by black zone lines. The disease is known only in young pines (less than 10 years old).

NZ distribution: Most records of the causal agent are from the northern half of the North Island. The disease is known principally from the Bay of Plenty and the Waikato. Where it causes tree deaths in orchard shelterbelt trees in the Bay of Plenty, it is known as white crown canker disease.

Control: Not considered necessary because of its low incidence.