This disease was originally called “Glenbervie root and stem canker” after the forest where it was first found. 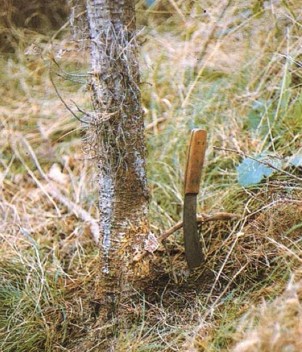 Fig. 1 - Direct contact between a branch of broom infected with Gloeopeniophorella sacrata and an uninfected stem of Pinus radiata has resulted in the transfer of the disease to the tree. Note the fungal pad which has developed at the point of contact, and the occurrence of resin bleeding.

Hosts
Gloeopeniophorella sacrata has been recorded on many exotic and native host plants. It is also known as a decay organism of dead wood.

Fig. 2 - Dead and dying trees at the margin of an infected patch of Pinus radiata . 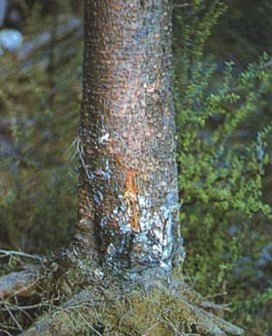 Distribution
The fungus, which was first recorded in New Zealand in 1951, is found in most parts of the country north of Otago. It is most prevalent in Northland plantations where it was first found. In the South Island, some forests in the Nelson region have the greatest incidence of mortality caused by this disease.

Disease development
The ideal habitat for development of this disease appears to be country carrying heavy manuka scrub in areas where warm soil and air temperatures are maintained for the greater part of the year. Infection is established when a root, or part of the stem of the new host come into contact with infected tissues of scrub plants. These scrub plants become attached to the host by a tough, white, fungal pad. As the disease progresses, a girdling canker is produced at root collar level, or on the stem, and copious resin bleeding occurs. Following the death of the host, cream to buff-coloured pads of fungal tissue form outside the bark and the woody tissue rots, becoming white and spongy.

In young exotic pine plantations the most distinctive feature of the disease is the way roughly circular patches of trees become infected and die: these patches increase in diameter as the stand ages. Trees die slowly over a period of 3-4 years. The first signs of the decline are a progressive yellowing and reddening of the needles, starting from the tips, and premature casting of the needles. The youngest needles are the last to show these symptoms and new needle growth is much reduced. In very young or unthrifty trees death can occur more quickly, so these symptoms of decline may not be evident.

The spread of the disease is arrested at the time of canopy closure. By this stage in stand development the scrub regrowth, which occurs in most areas where this disease occurs, has been entirely suppressed by the lack of light, so contact between infected scrub species and growing trees is effectively eliminated. Some mortality may still occur after canopy closure because infected trees continue to decline slowly.

Although fruiting bodies are produced on the stems of dead manuka, they are rarely found on the exotic pine species killed by the disease, and spore dissemination is thought to be unimportant in the spread of the disease.

Economic importance
In most parts of New Zealand the incidence of the disease is limited, and the fungus is not considered to be of significant economic importance. However, in areas where the disease is widespread (such as some Northland forests in heavy manuka scrub country), scattered groups of trees, amounting to 10-20% of those planted, have been killed within 10 years of establishment. Little further mortality has occurred thereafter and no new areas of infection have been observed in established stands. Although the impact of the disease in subsequent crops of pine trees is unknown, the fungus is known to remain virulent within a patch for at least 30 years.