The Dutch elm disease eradication programme is being coordinated and funded by the Ministry of Agriculture and Forestry (MAF), supported by the local city councils. The campaign during the 2002-03 summer consisted of three disease detection surveys and a limited pheromone trapping programme. Surveys that were undertaken during the previous three seasons to determine the incidence of Ophiostoma novo-ulmi in inner growth rings of asymptomatic elm trees were discontinued in favour of reinstating the pheromone trapping programme (O. novo-ulmi is the fungus that causes Dutch elm disease).

For the pheromone trapping programme 51 traps were deployed in five high risk areas (Pakuranga/east Tamaki, Remuera/Parnell, Howick/Bucklands Beach, Papakura, and Waikumete Cemetery in Glen Eden). In early March, 16 additional traps were placed at sites in west Auckland, Remuera, Papatoetoe, and Takanini. By 6 May a total of 3,514 beetles had been caught, of which 79 (2.2%) were contaminated by Ophiostoma novo-ulmi. Infective beetles were trapped at Waikumete Cemetery and Clayburn Reserve in Glen Eden, and Howick and Pakuranga.

The percentage of infective beetles caught was the highest since trapping began in 1990, outstripping the 1.3% trapped in 1990/91 (see Figure). 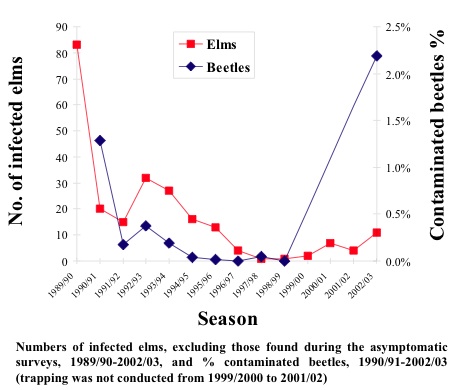 The find of an infected tree during the targeted survey, which was prompted by the trapping of infective beetles, shows the value of the pheromone trapping programme. It is nonetheless disquieting that the infected tree was not found during the routine disease detection surveys, and demonstrates the critical need for these surveys to be carried out thoroughly and accurately. Provided they are performed properly, eradication is still possible.