Last season's eradication campaign in Auckland consisted of three disease detection surveys and a survey to determine the incidence of the causal fungus (Ophiostoma novo-ulmi) in the inner growth rings of elm trees. As a result of the disease detection surveys infected trees were found at seven locations, five in the Howick-Pakuranga area and one each at Papatoetoe and Papakura. These trees displayed symptoms typical of the disease and the old wood of all but one yielded cultures of O. novo-ulmi. This is the first season since 1995/96 in which an infection has been identified only in the current wood. 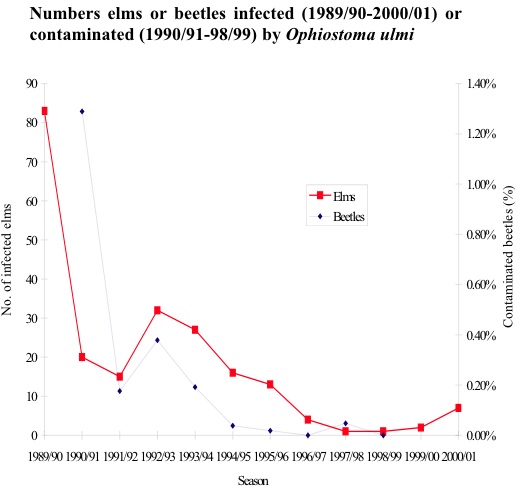 The survey to determine the incidence of O. novo-ulmi in old wood was started in Auckland on 15 January and finished on 9 May. Almost 2500 elm trees throughout greater Auckland were visited and four branches were cut from each tree. The branches were then sectioned and each cut surface was examined for staining (staining is a diagnostic feature of infection by O. novo-ulmi). All samples showing stain were sent to Forest Research to test for the causal fungus. Isolations of O. novo-ulmi were attempted from stain in 707 individual growth rings from 274 trees, and the fungus was found in three trees growing in Waikumete Cemetery, West Auckland. In addition, a pheromone-trapping programme was undertaken in high-risk areas, funded by Auckland City Council. A total of 887 beetles were caught in  51 traps, but none carried O. novo-ulmi. Additional traps were placed on the seven sites where infected trees were detected and these caught 1,691 beetles, of which 12 were contaminated by the fungus. The infective beetles were trapped at Papatoetoe, Howick, Pakuranga, and Papakura.

Despite the setbacks of isolating the fungus from the current wood of one tree, and of trapping infective beetles, providing effort is not reduced we are hopeful that Dutch elm disease can still be eradicated from New Zealand.