As reported last month three parallel transects between DED infected trees discovered in Sturm's Gully in the summer of 1993/94 and the newly found infected trees in December 1994 behind No. 17 Lighthouse Rd were root sampled. There was a large elm gap where samples could not be obtained but elms did occur on the slope above the transects and these were sampled to give some continuity. The samples were returned to Rotorua for plating out and the results positive for Ophiostoma novo-ulmi are plotted on the sketch map below. The positive samples suggest that the fungus occurs throughout the elm grove root system. Negative results may be attributed to the fungus not being evenly distributed through the trees root system, or simply failure to isolate it because competitive saprophytes swamped the sample and inhibited growth of O.novo-ulini. The majority of trees in this infected area do not exhibit symptoms of DED, they merely carry the fungus in their root system. Also the trees that were initially diagnosed as having the disease did not exhibit typical DED symptoms of sudden wilt, but rather looked scruffy and in a state of decline. So it would appear that this provenance of Ulmus procera has some degree of resistance, at least at this site, to DED. The trees that do begin to decline may be under some other environmental stress, such as drought, which gives the fungus a competitive advantage. Discussions have been held with the Ministry of Forestry and it has been decided to poison declining DED positive trees as they occur. Poisoning should ensure that all infected suckers and surrounding root grafted trees are also killed. It is impractical to remove all elms from the gully.

The Napier fungus has been confirmed as the same as the Auckland fungus, by vegetative morphology, pairing reactions and by comparison of randomly amplified polymorphic DNA. The big question is how did it get to Napier? Two possibilities have been suggested so far; one, contaminated beetles were transported to Napier where they infected a tree but failed to establish a viable population: two,a tree became infected via contaminated arborist equipment. However a third possibility is that the fungus went from Napier to Auckland. At some time in the past the fungus entered New Zealand and became established in Napier, disease development going unnoticed as the symptoms were not typical due to resistance of the host, and its spread was checked by the lack of a vector. Infected material from Napier may have been moved around the country but the fungus never became established anywhere else due to this lack of a vector. That is until it encountered Scolytus multistriatus in Auckland which then carried it to non-resistant elms.      ,^-—\ Unfortunately we may never know the real answer. ( Geoff Ridley) 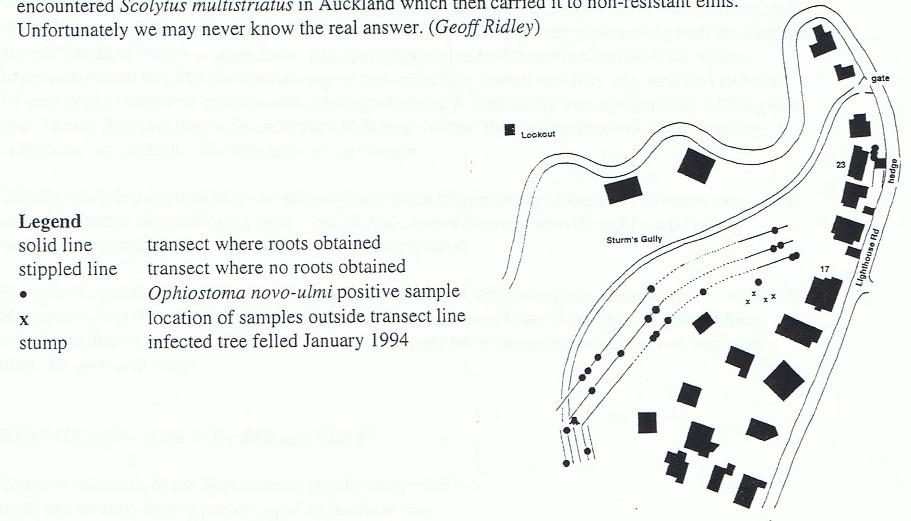 A pathology field party led by Peter Gadgil spent several days in Napier in January to investigate the mode of Dutch elm disease transmission. There are two documented modes, one, the spores of Ophiostoma novo-ulmi are transported by bark beetles and two, the fungus is able to migrate from tree to tree, via the vascular tissue, where root grafting has occurred. This latter method is enhanced by the prolific production of root suckers so that many of the perceived individual trees are in fact part of a clonal thicket. Thus if one "tree" becomes infected it is only a matter of time before the rest of the thicket is also infected. It is also interesting that the fungus only kills the stem tissue, apparently having no effect on root tissue, so is able to use the root systems to travel around. Beetles have not been detected in Napier in either the 93/94 nor in the 94/95 beetle trapping season, strongly suggesting that root transmission is occurring. To test this hypothesis three parallel transects between the infected trees discovered in the 93/94 and the newly found trees, some 190 m, were sampled for roots. The root samples were then returned to Rotorua and plated out. We are now waiting on the results of these isolation attempts.

Clive Brasier has confirmed that the Napier isolates of Ophiostoma novo-ulmi belong to the same vegetative compatibility (v.c.) group as the Auckland isolates of the fungus. Clive has a very large range of v.c. types available to him and his confirmation that the Auckland and Napier isolates belong to the same v.c. groups now definitely indicates that Auckland was the source of the Napier infection.

From Forest Health News No. 27, January 1994
-DUTCH ELM DISEASE IN NAPIER OR "WHAT I DID IN MY HOLIDAYS"
A port environs survey at Napier was begun on 22 December (1993) in the Bluff Hill Reserve. Within about 30 minutes I had located 7 moribund elms in the Sturms gully section of the reserve and spent the following hour fossicking around the trees trying to determine the cause. There was some evidence of staining in the cambium but both the general appearance of the affected trees and staining did not look like that of Dutch elm disease. I thought it more likely to be an abiotic influence induced by the sewerage pipes running through the centre of the affected trees with possibly a secondary infection. Nevertheless samples were obtained from a small tree and sent to NZFRI for plating and identification. MOF-Rotorua, NZFRI and the Napier City Council were immediately notified of my concern and the possibility of Dutch elm disease, and Ross Morgan instructed me to take a further sample from in the crown. Due to the very large size of these trees (approx 25-35 metres) an arborist was called in to scale and fell one of the moribund branches. This was carried out on the following day and another sample was dispatched to NZFRI.

I was notified at exactly noon on Sunday 26 December by John Bain that the samples had proven positive for the casual agent of Dutch elm disease ... and thus began our work!

The survey of Napier, which began on the 27th, was headed by the Principal Protection Officer for the Northern forest health team Ard Zandvoort. Felling was carried out by Treescapes (of Auckland) due to their expertise and experience in this field. Murray Chisnall (MOF Senior Protection Officer - Quarantine) organised the fumigation and destruction of the elm logs and opened his office as the focus for the ensuing barrage of inquiries and elm location information. The Napier City Council were most cooperative, professional and helpful with the outbreak and certainly made life a lot easier with all concerned in the project.

-DUTCH ELM DISEASE IN NAPIER
After a very busy and at times very challenging year, I had just started to relax on Boxing Day when the phone rang and for an instance, Brent's popularity went way into negative figures. Having recovered and resigned myself I greatly boosted Telecoms profits for that day and indeed the rest of the week. Fortunately I had a very good grasp of where the rest of the team was over Christmas and by Monday morning, Frank, Colin and myself, roared off to Napier to meet up with Brent and start the survey.

Rather than having a relaxing week, it turned out to be one of the busiest I can remember, because apart from organising and actively participating in the survey, I had to deal with TV crews and other press people and liaise with Murray Chisnall and the Treescape crew, as well as John Bain, Ross Morgan and Napier City Council staff. The very hot and humid weather certainly made things difficult at times as well, however we soon found out that when it does rain, visibility is severely hampered.

The numbers of elms and elm suckers/coppice on the Napier Bluff are astronomical, in fact we gave up trying to count them. Although we had a very good look on the ground, I was not really satisfied that we had not overlooked any further disease centres until we had a look from above during a brief helicopter survey. All in all, I believe that everybody put in a very good effort and at this stage it still looks that Sturms Gully was the only disease location.

It was a particular good effort of Brent Rogan to locate the affected trees so early on, as the area was not due for another Port Environs inspection until February/March. (Ard Zandvoort)

-A BIT OF A MYSTERY
As part of the Napier Dutch elm disease campaign FRI has placed 20 Scolytus multistriatus pheromone traps around the Bluff Hill area. These are inspected twice a week but so far have yielded no beetles. Thorough searches of suitable breeding material in Napier have revealed no signs of the beetle either. The only logical conclusion is that beetles infected at least one tree there but failed to establish a breeding population. The cultures of Ophiostoma novi-ulmi from Napier appear identical to those from Auckland and they are vegetatively compatible, so it would appear likely that the source of the Napier infection was Auckland rather than a separate introduction via the Port of Napier.