From Scion publication Forest Research Bulletin 220,
An Introduction to The Diseases of Forest and Amenity Trees in New Zealand,
G.S.Ridley and M.A. Dick 2001.

Symptoms: The first symptoms caused by Dothistroma pini usually occur on the needles of branches close to the ground. Symptoms first appear on current foliage of P. radiata at the end of summer and become more obvious from about late June to early October. Defoliation can occur all the year round but is most apparent in spring. The main infection period is November-February (late spring through summer). Characteristic symptoms (Table 2) are as follows: brick-red bands appear on green needles and persist long after the green needles have withered and become dull brown or grey (Fig. 23); small black fruit-bodies erupt in the red infected band; brown/red needles which have been killed by the fungus adhere to the tree for a considerable period of time (Fig. 24). 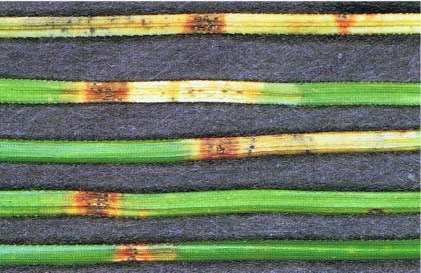 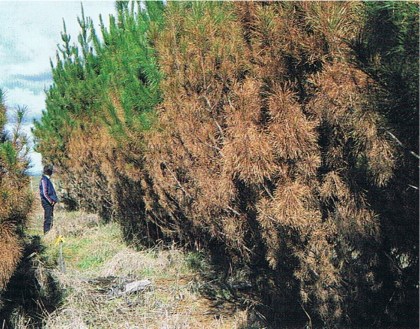 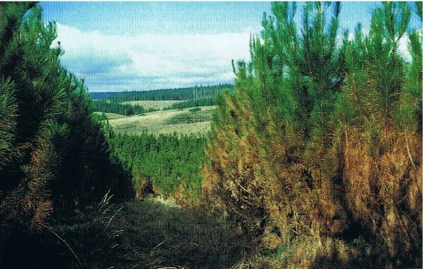 Disease development: Only the anamorph of Dothistroma pini is present in New Zealand. The conidiospores are released from fruit-bodies into a film of water covering the needle surface. This water accumulates at the needle tips in droplets, and when they fall and are broken up by contact with other objects the spores become airborne. Normally they do not travel far and infection in a stand is only from one tree to the next. Under the same conditions, seedlings are much more severely affected than cuttings. The transport of conidiospores over long distances is probably the result of their being caught up in mist or cloud and happens only infrequently. Before internal quarantine was in force, seedlings from infected nurseries were responsible for much of the early spread.

Conidiospores that land on the surfaces of a susceptible host's needles germinate and, depending on conditions, a variable number will penetrate through the stomata. After the infection hypha has passed between the guard cells of the stoma, a swollen vesicle is formed just below the guard cells. This vesicle is a resistant structure, which allows the fungus to remain dormant when conditions for further growth are unfavourable. The lateral spread of fungal hyphae within the needle tissue is limited to a few millimetres from the point of infection. A much greater length of the needle is killed through the action of a toxin, a bright red compound called dothistromin, which is produced by the fungus and which diffuses well ahead of the fungal hyphae. After hyphal growth has continued for some time, fruit-bodies are formed which push their way through the needle tissues to the needle surface.

The three major interacting factors of temperature, duration of needle-wetness period, and the number of viable conidiospores landing on the needle surface govern the establishment of infection in a susceptible host. Although infection can occur between 8° and 24°C, hundreds of thousands of conidiospores and wetness periods exceeding 4 days are required at the extremes for infection to be successful. At the optimum temperature (16°-18°C mean daily temperature), several thousand conidiospores and a wetness period of 10 hours are sufficient for infection to become established. The development of the fungus within the needle tissues is also regulated by temperature and needle-wetness period. Under optimum conditions produced experimentally (16°C mean daily temperature and continuous needle wetness), the time from infection to emergence of spore-producing fruit-bodies was 19 days. In the field, under normal central North Island conditions, this time ranges from 6 weeks in December to 15 weeks in May. Under dry conditions, even if infection is established the fungus can remain dormant for months.

Infection does not occur in the absence of light. The severity of infection increases linearly with increasing light intensity up to about 25% of the midday light intensity at mid-summer in Rotorua. This dependence of infection on light (which is unusual for fungi) may explain why shaded branches do not usually become heavily infected.

The usual progress of the disease in the central North Island is as follows. No (or very little) infection takes place from May to August because of unfavourable temperatures. Many of the old infected needles are shed; these quickly become overgrown with saprophytic fungi and, within weeks, cease to function as a source of viable, infective conidiospores. In September, much of the old inoculum has gone and although new infections become established as temperatures begin to rise, their number is not large. At daily mean temperatures of about 12°C, fungal development takes about 12 weeks before fruit-bodies are produced and these appear in the second half of November or early December. New infections resulting from conidiospores released from these fruit-bodies substantially increase disease levels at this time as temperatures are near optimum and inoculum levels are high. Infections occurring in January fruit in February and a second wave of infection may occur, although normally leaf wetness periods tend to be too short at this time. The main infection period thus is from late November to February. If this period is wet, infection levels rise markedly unless chemical control is undertaken in late November-early-December to reduce the quantity of inoculum at the beginning of the infection period.

NZ distribution: The fungus is found throughout New Zealand. Areas with low summer rainfall, such as Hawke's Bay and Canterbury, have low levels of infection and some forests on the Canterbury Plains are still free of infection.

Economic impact: Dothistroma needle blight is one of the most widespread and serious diseases of P. radiata in New Zealand. The major consequence of the disease is a loss in volume. For an individual tree, the reduction in volume increment is initially directly proportional to the average level of crown infection over at least a 3-year period, e.g., if an average of 10% of the crown is infected, there will be a 10% reduction in volume increment. Infection averaging more than 40% of the crown results in progressively greater reduction in volume increment, and growth almost stops when 80% of the crown is infected over successive years. The effect of the disease on overall growth of the stand is more difficult to measure. Levels of infection can vary greatly between individual trees and from year to year. Initial stocking may be high enough to allow removal of heavily diseased trees as thinnings to waste, but this option may not be available in stands established at only 600-700 stems/ha. In a trial in Kaingaroa Forest, final-crop trees sprayed three times had 10.3 m3/ha more volume at age 13 than the crop trees in the unsprayed control.

Control: Chemical control of dothistroma needle blight is generally effective. Application of copper oxychloride fungicide at appropriate times significantly reduces inoculum production; the fungicide also protects the existing foliage from new infection for 4-6 weeks. The control programme is organised co¬ operatively for the whole of New Zealand. With the pruning of infected lower branches, fruit-bodies are cast to the ground and the opportunity for conidiospore dispersal is greatly decreased. Conidiospores may be produced on cast needles for up to 6 months but this is related to how dry the needles remain. If wet, other litter fungi compete with and displace D. pini.

History: Dothistroma pini was first found in New Zealand in 1962 (near Tokoroa) and first identified in 1964. It spread rapidly at first and was present in Nelson by 1966. Internal quarantine measures were then imposed and the spread slowed down. It was 1978 before it appeared in Southland, and Canterbury was the last area to become infected in the mid-1980s.