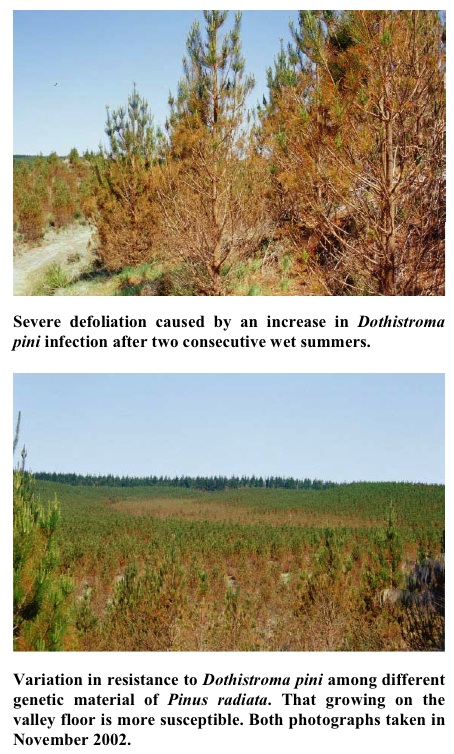 Three factors govern infection – temperature, leaf wetness period, and the amount of inoculum. The main infection period is from November to February when temperatures are optimal for disease development. Regions where Dothistroma needle blight is currently significant experienced two consecutive wet summers in 2000/01 and 2001/02, in terms of both total rainfall and number of rain days. The wet weather coupled with suitable temperatures and increasing inoculum has resulted in very high disease levels.

Delays to spraying last year because of the unsettled weather have compounded the problem. Forest owners are making every effort to ensure that aerial spraying for the control of Dothistroma is done on time this season and are no doubt hoping for a dry
summer.

The Dothistroma Control Committee has commissioned an aerial spray trial to be carried out by Forest Research that will examine the effect of reducing the amount of spray oil used in the spray formulation. Spray oil is a significant component of the spray cost and if quantities used can be reduced without loss of efficacy considerable savings can be made. The trial, which will also test some new copper formulations provided by two manufacturers, will be carried out in late November.