Regional variation in incidence and severity of Cyclaneusma is well recognised, but regional disease/growth loss relationships had not been quantified. So in late 1994, five sites were chosen to measure the effect of Cyclaneusma on tree growth. The selected sites were in Otago Coast Forest; Golden Downs (Nelson); Puketiro Forest (Upper Hutt); Ruatoria Forest (East Cape); and Mahurangi Forest (Northland). Five 20-tree plots were established at 3 sites in 1994, an additional trial was established at Kaihu Forest near Dargaville in 1995, and plots were established at Ruatoria and Rabbit Island in Nelson in 1996. Each 20-tree plot consisted of 10 trees selected as susceptible to Cyclaneusma and 10 trees of similar size and form not infected by Cyclaneusma. Disease and DBH growth assessments were carried out during October/November. At Puketiro Forest, trees chosen as susceptible had average disease levels of 61% over the last three years; compared to 5% for the "healthy" trees. Diameter increment from 1994 to 1996 was 37 mm for the susceptible trees and 56 mm for the "healthy" trees. At Mahurangi, disease levels averaged 69% for the susceptible trees and 13% for the "healthy" trees. Respective DBH increments were 50 mm and 73 mm. Otago Coast had lower disease levels of 33% (susceptible) compared to 3% ("healthy"). Respective increments were 49 mm and 54 mm. At Kaihu, disease levels averaged 64% (susceptible) over 1995 and 1996 with an increment of 26 mm, and 6% for "healthy" trees which grew 33 mm. 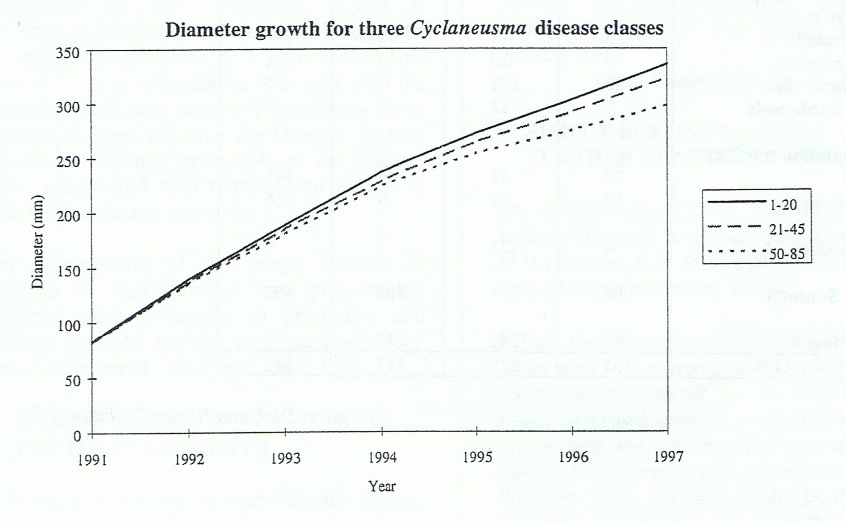 Regional variation in the incidence and severity of Cyclaneusma is well recognised but not quantified. So in late 1994 sites were chosen to test the assumption that disease-growth loss relationships do not differ between regions. The selected sites were in the Otago Coast Forest; Puketiro Forest (Upper Hutt); and Mahurangi Forest (Northland). Five plots of twenty 7-year-old trees were established in each forest. In each plot ten trees were selected as susceptible to Cyclaneusma and each of these were paired with a healthy tree of similar size and form. Disease and DBH growth assessments were carried out during October and November 1995. At Puketiro Forest the trees chosen as susceptible had average disease levels of 56% (1994) and 64% (1995); compared with 3% and 7% for the "healthy" trees. Diameter increment from 1994 to 1995 was 19 mm for the susceptible trees and 24 mm for the "healthy" trees. In Mahurangi Forest the disease levels averaged 61% (1994) and 74% (1995) for the susceptible trees, 7% and 18% for the "healthy" trees with DBH increments of 32 mm and 43 mm respectively. Otago Coast Forest had lower disease levels of 38% and 32% for susceptibles, 1% and 2% for "healthy" trees, and respective increments of 28 mm and 29 mm.