From Forest Research Bulletin No. 222.

Cyclaneusma needle-cast is a fungal disease caused by C. minus which infects and sometimes kills Pinus radiata.

It is thought to cause average growth losses of 6.6% a year in the country’s radiata plantations, and to cost about $50 million a year.

Cyclaneusma causes browning of foliage and the heavy shedding of 1-yr old needles, normally in spring. Trees become infected in autumn- winter (May-June) when needles are about 8-9 months old.

Disease severity is highest in 11- to 20-year old stands, on the East Cape, Northland, central North Island, Dunedin and Southland and the lowest in Nelson, Central Otago and Canterbury. Severity appears to be related to micro-site, with highest severity on sites prone to mist and low cloud. 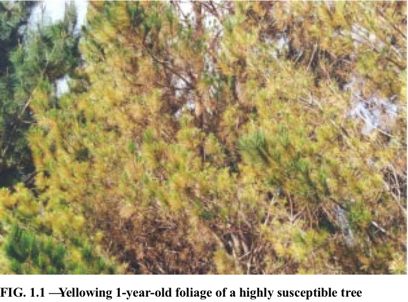 At an average disease severity of 60%, trials showed there was a 50% loss in diameter increment over six years. Projections of stand growth to age 30 for various proportions of diseased trees predicted a reduction in volume of 10–14 m3/ha for each 10% increase in the proportion of diseased trees.

For the country’s radiata estate, average growth losses of 6.6% a year between was predicted for stands aged between 6 and 20 years. The financial losses were estimated to be of the order of $51 million a year.

Researchers concluded that the high cost of fungicide spraying could not be justified, even though some treatments were effective at reducing disease levels. Tree stocking density or pruning had no practical effect on the incidence or severity of the disease. 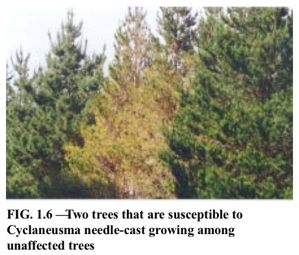 Thinning trials showed that, when using susceptibility to Cyclaneusma as a main criterion for tree selection, a delayed first thinning at age 7 or 8, followed by a second thinning at age 10 virtually eliminated the disease from the stand.

However this does not appear to be practical in a commercial situation. Normal thinning criteria is (1) even spacing, (2) good form (removing those with distorted stems, multiple leaders, large branches, and (3) vigour. Adding cyclaneusma as a criterion - especially if it was made number one priority - would likely cause problems in most forests.

Indeed, a survey of forest managers at a recent workshop revealed that none was thinning for cyclaneusma. Clearly, a practical solution to this costly disease still needs to be found.